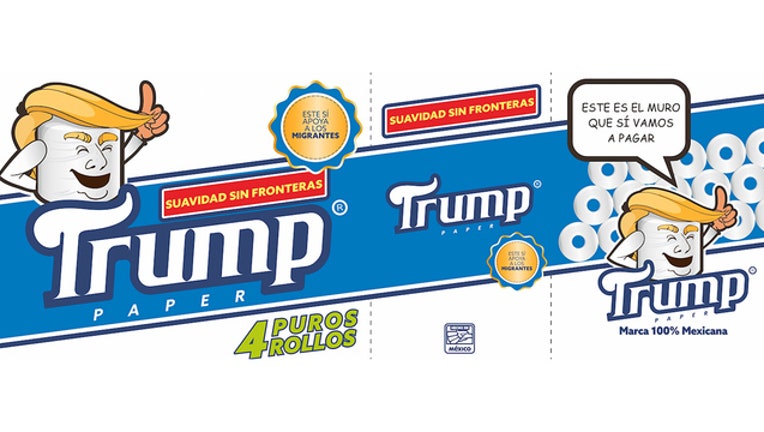 MEXICO CITY (AP) - A Mexican businessman offended by President Donald Trump's insults to his countrymen is seizing on a possible oversight in the magnate's branding plans.

Corporate lawyer Antonio Battaglia is introducing "Trump" brand toilet paper, marketed under the slogans "Softness without borders" and "This is the wall that, yes, we will pay for."

Mexico's Institute of Industrial Property has granted Trump's company trademarks on his name in sectors such as construction, hotels, tourism, real estate and financial services. But the Trump Organization didn't bother to cover what's referred to in Spanish as "hygenic paper," and Battaglia's trademark for Trump toilet paper was approved in October 2015, according to the institute's records.

Packages are expected to begin rolling off production lines later this year, with 30 percent of the profits promised to programs supporting migrants.

Battaglia said he was "really bothered" when Trump launched his presidential bid by characterizing migrants who enter the U.S. illegally as criminals, drug runners and rapists.

"My thinking was: We can't keep quiet, right?" he said by telephone from the central Mexican city of Leon. "So with this insult that was made, (I figured) I'm going to add my grain of sand in response."

Battaglia said he has signed a contract to manufacture a small initial run worth about 400,000 pesos ($21,400), enough to fill two cargo trucks. He said he hopes to generate enough demand to expand production.

A mock-up package provided by Battaglia boasts it contains four "puros rollos" - a double-entendre that literally means "pure rolls" but can also be understood as "pure nonsense." It shows a grinning cartoon character giving an enthusiastic thumbs-up. It's not an exact likeness of Trump, but its swooping blond locks are a clear nod to the president's famous hairdo.

A lawyer for the Trump Organization did not respond to phone messages and emails seeking comment. But Trump has been aggressive about protecting his brand when he feels it is being encroached upon.

Battaglia argued he is well within Mexican law as the legal trademark-holder, with no direct link between his product and Donald Trump or his image.