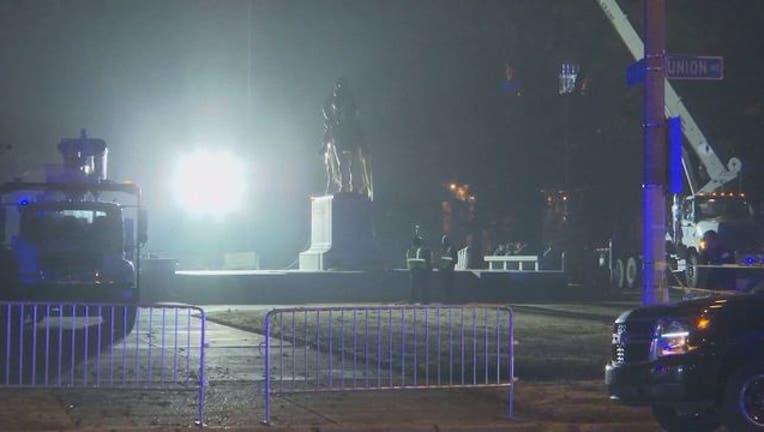 MEMPHIS, Tenn. (AP) — A city council in Tennessee voted Wednesday night to sell two parks where two Confederate statues are located and crews began work to remove one of them.

Memphis Mayor Jim Strickland said in a tweet that Health Sciences and Fourth Bluff parks were sold and that work underway there complied with state law, the Commercial Appeal reported . The council unanimously approved the sale to a private entity Wednesday.

A statue of Confederate Gen. Nathan Bedford Forrest is at Health Sciences Park and one of CSA President Jefferson Davis is at Fourth Bluff Park.

A crew at Health Sciences Park wrapped a strap attached to a crane around the statue of Forrest on Wednesday night, and a large truck was in place to haul it away. Police had cordoned off the area around the statue.

Earlier this month, the city filed a petition asking for judicial review of the Tennessee Historical Commission's denial of a request to remove the Forrest statue.

"I commend Mayor Strickland and the City Council for finding a way to legally remove statues from an era that is not representative of Memphis today and have remained an affront to most of the citizens of Memphis," U.S. Rep. Steve Cohen, a Democrat from Memphis, told the Commercial Appeal.

Cities have tried to remove Confederate monuments after the racially motivated massacre of nine people at a black church in South Carolina and a violent white supremacist rally in Charlottesville, Virginia.

Protesters have called for the statue's removal, saying it represents racism and bigotry. City leaders have discussed ways to relocate the statue of Forrest and move his remains, which are buried under the monument.

Supporters of keeping the statue in place say it represents an important part of history. The Sons of Confederate Veterans in Memphis has said such monuments do not represent white supremacy and it would be a mistake to remove them.

"It is a deliberate attempt to avoid the state law and the city is breaking the law," Lee Millar with Sons of Confederate Veterans told WREG-TV on Wednesday.

Forrest was a slave trader, Confederate general and Ku Klux Klan leader who became influential in the city's growth after the Civil War.

Information from: The Commercial Appeal, http://www.commercialappeal.com