During Friday’s meeting, the mayor wanted to know what tactics were used when more than 600 people were arrested on the Margaret Hunt Hill Bridge on Monday.

DALLAS - Dallas Mayor Eric Johnson had a lot of questions for Police Chief Renee Hall during a special meeting about the police response to protests.

During Friday’s meeting, the mayor wanted to know what tactics were used when more than 600 people were arrested on the Margaret Hunt Hill Bridge on Monday.

Before the tense exchange between the two Dallas leaders, more than 200 people spoke out about the city's reaction to ongoing protests. They were almost all outraged about what happened on the Margaret Hunt Hill Bridge.

Nearly 700 people were arrested on the bridge Monday night after a group of protestors who had started at the courthouse outside of the city’s imposed curfew zone. They later marched onto the bridge, where they were met by police and the National Guard. Officers closed off the bridge.

Some demonstrators described police using tear gas and being hit by foam bullets.

Mayor Eric Johnson asked Chief Hall directly about those reports. He was not pleased with her response. 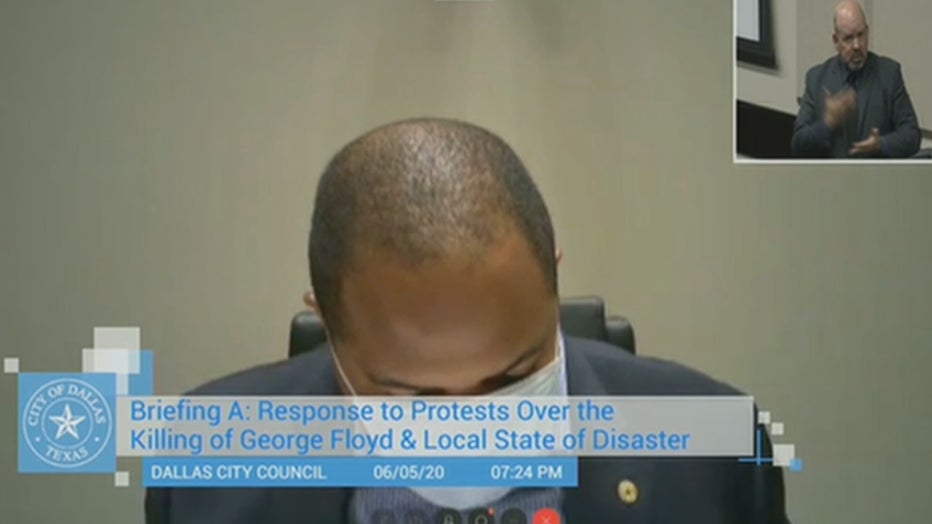 “Those who were hit showed me massive blue and black splotches on their skin where they had been struck. I saw at least one bloody face. You're saying you still have no confirmation as to whether those people are telling a falsehood?” Johnson asked the chief.

"I'm not saying that they're not accurate," Hall said. "I'm saying I have no no knowledge at this time."

“You're saying you don't have any knowledge of that?" Johnson said.

"I'm saying I can't prove that,” the chief said again.

Earlier in the evening, more than 200 people spoke out against the department for its handling of Monday’s incident.

Very few signed up in support of the way the department has handled the peaceful portions of the protests. One speaker compared it to an “authoritarian dictatorship.”

“I was arrested and detained for hours on Monday June first,” one speaker said. “The only escalation that was made was from the Dallas Police Department. We were shot at. We were held down. I don't want you to think I'm exaggerating, but I'll tell you have a seven-inch bruise on my thigh from being hit. We are going out on the streets and getting attacked for our freedom of speech.”

Chief Hall also talked about two uses of force with the foam bullets over this past week. One that broke a protester’s jaw and one that caused a protester to lose an eye. They also talked tonight about more de-escalation training, use of force training and identifiable badges on each officer.