Swarms of dragonflies picked up on weather radar

Experts say the dragonfly swarms are difficult to study because they are short-lived.

CLEVELAND - Dragonflies were out in full force this week in parts of the United States.

In fact, the apparent swarms were so massive, they were picked up on weather radars Tuesday across three states, according to the National Weather Service.

Swarms could be seen over portions of Indiana, Ohio and Pennsylvania in images released by the National Weather Service in Cleveland, which confirmed that it wasn’t rain being observed. 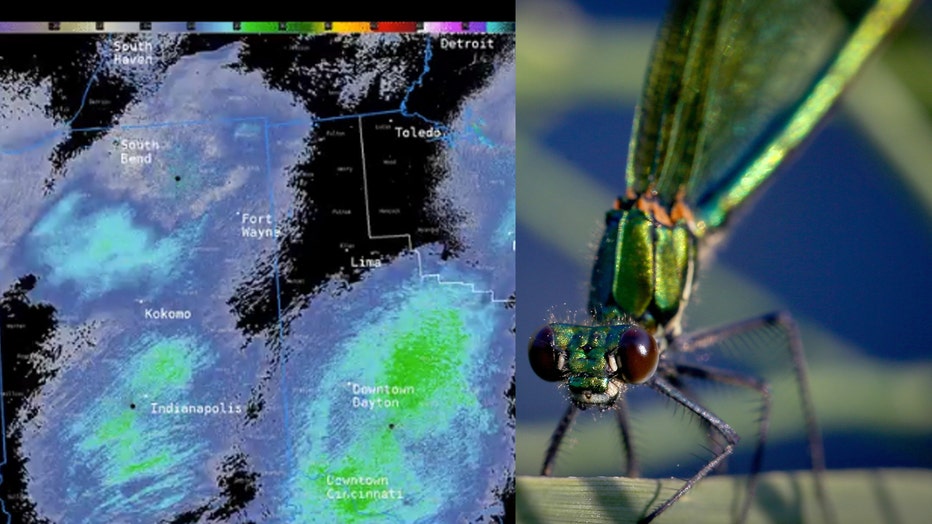 An image of the weather radar on Sept. 10, 2019 was shared by the National Weather Service, alongside a file photo of a dragonfly sitting on a plant. (Photo by Ozkan Bilgin/Anadolu Agency/Getty Images)

"While we are not biological experts, we have determined — through input from our followers — that it's most likely dragonflies mixed with other insects/birds," the NWS Cleveland posted on Twitter.

Many also posted about their run-ins with the insects on social media.

Entomologists know that dragonflies swarm for various reasons, but little is known about the behavior, according to the Dragonfly Swarm Project — a large-scale study open to the public on dragonfly swarming.

Experts say there are static feeding swarms, where the dragonflies repeatedly fly over a defined area and close to the ground feeding on small insects, as well as migratory swarms, where hundreds to millions of dragonflies move in a single direction.

But the swarms are difficult to study because they are short-lived, according to Scientific American.

And for those worried about running into the insects, experts say dragonflies are not a danger to humans and do not bite spontaneously.