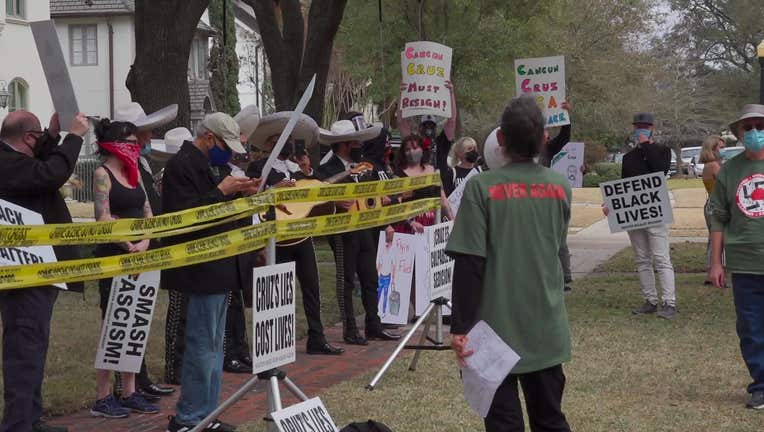 Demonstrators gathered outside of Senator Ted Cruz's home in Houston on February 21, 2021.

HOUSTON - A mariachi band played as protestors gathered outside the Houston home of Senator Ted Cruz, who came under fire last week for traveling to Cancun during a winter storm in Texas.

Demonstrators gathered on the sidewalk in front of the senator’s house on Sunday and demanded his resignation.

Between chants and speeches from protestors, a mariachi band sang and played trumpets.

Videos of the performance were shared on social media.

Protestors at the demonstration were critical of Sen. Cruz’s trip to Mexico while millions of his constituents were left without power, heat or running water during the historic winter storm.

The senator said he went on the trip to chaperone his young daughters who wanted to escape the cold, and so he could be a good father. But Sen. Cruz said he felt guilty as soon as he left and decided to come back early to help.

"When I arrived and saw the initial firestorm, what had started with second thoughts that I had as soon as we left, grew even greater. And I certainly regret that this has become a distraction when at a time, so many Texans are hurting and frustrated and mad," Sen. Cruz said.

U.S. Senator Ted Cruz speaks to reporters after he returns home from Cancun, Mexico. Sen. Cruz came under fire when he was spotted leaving Texas for the vacation town in Mexico while several Texans were without power and water.

"Frankly, leaving when so many Texans were hurting, didn’t feel right so I changed my return flight and flew back on the first available flight I could take," Sen. Cruz continued.

Over the weekend, photos were shared on Sen. Cruz’s Twitter account showing him loading bottles of water into cars and serving barbecue to first responders in Houston.