The man accused of killing two people, including a Richardson police officer, was found guilty Wednesday on two counts of capital murder.

Brandon McCall, 29, fatally shot SWAT Officer David Sherrard during a domestic disturbance at an apartment complex in February 2018. McCall also killed 30-year-old Rene Gamez, a friend who was letting him stay at his apartment.

McCall showed no emotion when the judge read the guilty verdict.

Sherrard’s family was sitting in the gallery and there were audible sniffles and sighs of relief. Afterwards, Sherrard’s widow hugged the Richardson police chief. Both had tears in their eyes.

Sherrard’s widow was later escorted out of the courthouse with the chief and lead prosecutor by her side. Her family and other officers followed closely behind, with loved ones exchanging hugs in the parking lot. The Sherrard family opted not to make any comment to reporters.

In a statement, the Richardson police chief said in part: “Knowing that justice has been served will allow further healing by all of those so deeply impacted by this tragedy. We appreciate everyone who has shown support for our Department and the Sherrard family, you have helped us shine a light on David, making sure he will never be forgotten.”

Leaving the courthouse, McCall’s defense team said they’re focused on the next step in this case — the sentencing phase. 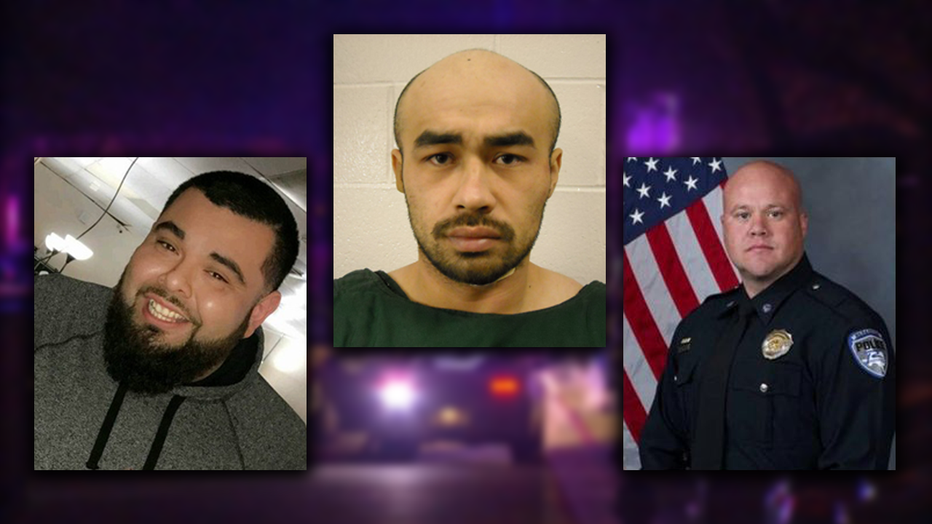 During the trial, jurors saw photos of the crime scene, along with the fallen officer’s bullet-riddled vest and bloody uniform shirt. They watched several graphic body camera videos that showed Officer Sherrard being shot.

The jurors also heard a police interview with McCall at a hospital. He appeared to be surprised that both men had died.

Defense attorneys did not deny McCall fired the shot that killed Sherrard but argued he did not “intentionally and knowingly do so,” which was required to find McCall guilty of capital murder.

The defense ultimately rested without calling any witnesses. McCall waived his right to testify.

The sentencing phase of the trial will begin at 9 a.m. on Monday. McCall faces the death penalty or life in prison without parole.