Fort Forth SWAT members arrested a man who allegedly fired at police, code enforcement and professional lawn mowers after an hours-long standoff.

FORT WORTH, Texas - Fort Forth SWAT members arrested a man who allegedly fired at police, code enforcement and professional lawn mowers after an hours-long standoff.

Police say they were there because of repeated code violations and were met with violence.

After four hours, a standoff between a Fort Worth man and Fort Worth police finally came to an end just before 1 p.m. Friday afternoon.

It all started on Cedar Springs Drive around 8:30 a.m. when police say code enforcement officers showed up to mow his front lawn.

The grass, under Fort Worth city code, had to be under 12 inches. Fort Worth police say they accompanied code compliance to serve the homeowner with a violation for high grass. It was his seventh citation within two years.

Police say after several knocks at the door, no one answered. So the mowing company hired by the city started mowing. 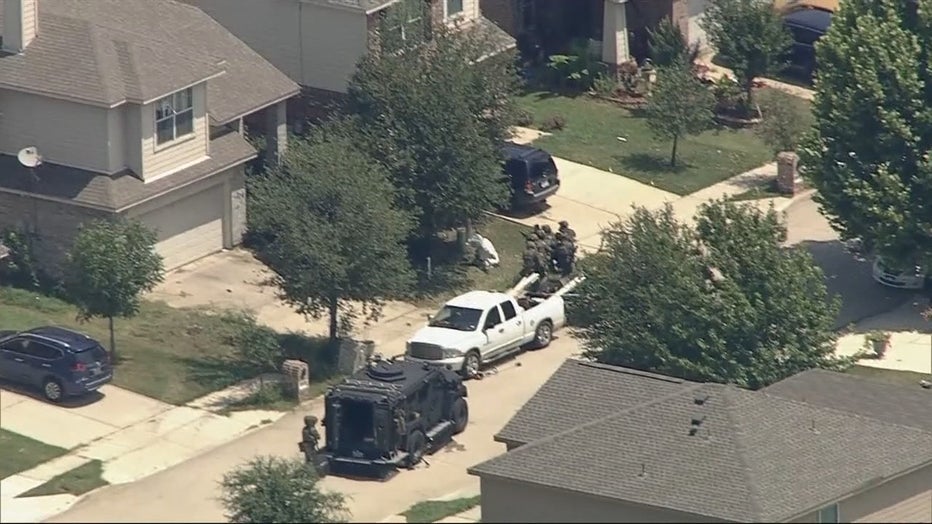 That’s when Fort Worth Officer Jimmy Pollozani says the homeowner opened fire and started shooting towards the mowers, code compliance and police.

"We heard like around five to six shots," she said. "And that’s whenever I actually screamed because I never heard that before."

Additional officers soon arrived along with the SWAT team.

During the standoff, the man fired again towards officers two more times.

"Nobody was struck by gunfire, but it appears that some of the code compliance vehicles were struck by bullets," Pollozani said.

Finally, officers deployed tear gas, forcing the homeowner to exit the home. SKY 4 captured him walking out into the front yard surrendering while wearing a hazmat suit that police say they did not provide him.

According to the city, the man’s history with code compliance dates back to 2010 when he was cited for improper water runoff. Then in 2012, he was cited again for storing fencing materials in his front yard.

"This is the first I’ve ever heard of it in my 15-year career," Pollozani said. "Being shot at trying to make the community look better? That just proves the dangers of this job."

Police say the man had weapons on him when he surrendered. It’s unclear if it was the gun he used to fire at the officers. He is charged with aggravated assault with a deadly weapon.