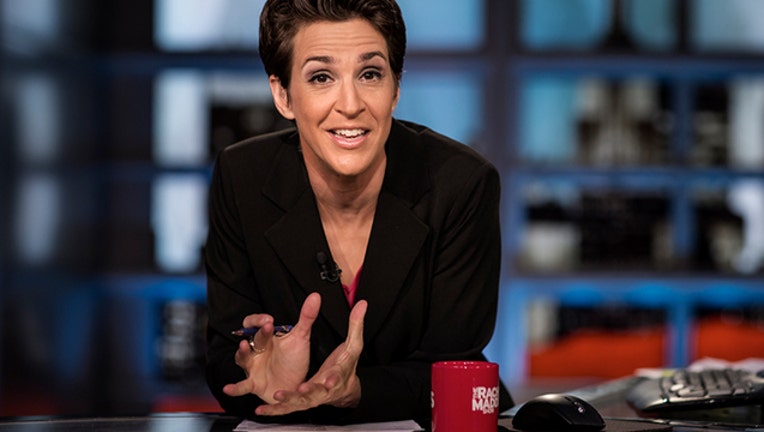 NEW YORK (AP) - Rachel Maddow says that if people felt let down by her story about President Donald Trump's 2005 tax document it's more because of the weight of expectation than anything she did.

The MSNBC host found herself in the odd position Wednesday of defending herself from criticism following one of the biggest-ever scoops for her show. Maddow's show revealed, through reporter David Cay Johnston, two pages of tax return information that showed Trump earned $150 million in 2005 and paid $38 million in income taxes that year. Trump has steadfastly refused to release his tax returns.

An estimate of how many people watched her show was expected later Wednesday afternoon.

Maddow's tweet less than 90 minutes before her show that "we've got Trump's tax returns" set off a social media frenzy. Although a subsequent tweet specified it was only two pages from one year's returns, expectations were sky high.

Maddow told the AP that she never misrepresented what she had.

Her story was derided as "a big nothingburger" by Fox News Channel's Steve Doocy on Wednesday. There were unflattering comparisons to Geraldo Rivera's opening of Al Capone's vault, television shorthand for an anticipated event that doesn't meet expectations. The White House's pre-emptive step of issuing a statement with Trump's income and estimated taxes for that year before Maddow's show started also took air out of the story.

Maddow's nearly 20-minute explanation of why seeing the president's tax returns is important and all of the things they could reveal - before telling what the 2005 documents actually showed - may have felt familiar to her regular viewers but a long tease for those enticed by the advanced advertising.

Tweeted ESPN's Bob Ley during the show: "If you have news, Rachel, please tell us. Soon. I'm not young."

"My priority is to get the story right and put it into proper context, and explain the weight of it and why it is important," Maddow said. While she didn't reveal the income figures immediately, she did tell viewers at the top of the show the exact documents that were obtained and how they came to light, she said.

The fact that the material was leaked - and the Trump administration contended that it was illegal for Maddow to publicize it - is as important as what it revealed, Maddow said. If it happened once, it's likely to happen again, she said.

"This is a super interesting first window into his finances, and the question of his finances is a legitimate scandal," she said.

While Trump called NBC News "fake news" in a tweet Wednesday, he didn't mention Maddow specifically. His son, Donald Trump Jr., did that in a tweet: "Thank you Rachel Maddow for proving to your Trump hating followers how successful #realDonaldTrump is and that he paid $40mm in taxes."

Johnston noted in a tweet Wednesday that the White House had confirmed what Trump had called "fake news." And he said that Trump fans had harassed his wife and one of his children by phone. "Sad!" he tweeted. "Let's have open debate, not threats."

Maddow said she didn't feel that the White House had undercut her story by releasing the tax information early, noting that it was important to get confirmation that the story was right.

Some Trump supporters found the revelations a positive, given that critics of his failure to release taxes had suggested the president wasn't as rich as he let on, or that he paid little in taxes. Maddow even faced some criticism within the family: a commentary by Jay Yarow on sister station CNBC's web site that was headlined, "Donald Trump just got a nice victory, thanks, of all people, to Rachel Maddow."

"I don't really care," Maddow said. "It is funny to me that a president would spend this much energy and political capital to keep secret his finances and his taxes specifically and simultaneously would want to brag about how much money he made. If that's really what he wants the story to be, he can release all of his taxes and we can all glory in his immense wealth."