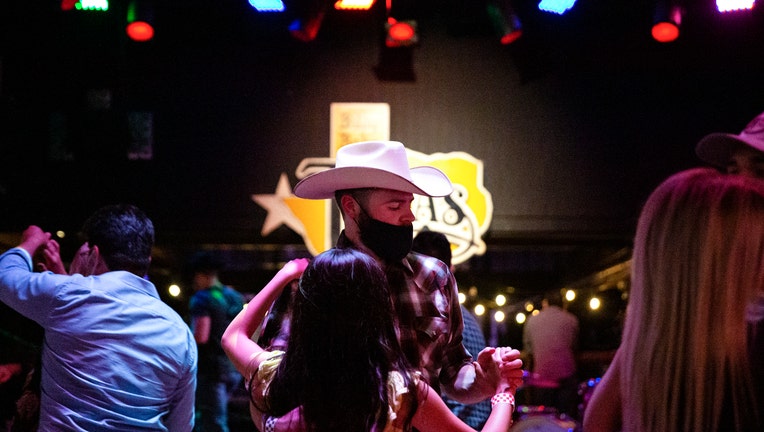 Guests dance at Billy Bob’s Texas, a honky-tonk in Fort Worth. Billy Bobís has been operating since August 13 under food and beverage guidelines after previously being classified as a bar. Bars that did not already get the food and beverage license w

By mid-November, hospitals in Lubbock were stretched thin as cases of COVID-19 spread quickly and widely throughout the West Texas community. A large number of new cases had erupted among young people who continued to flock to bars and restaurants in the college town.

"There are several steps that can be taken now that, as an enforceable mandate, would slow the avalanche descending on our local hospitals," area doctors, nurses and other health care workers wrote in a petition to Gov. Greg Abbott, in which they pleaded for harsher restrictions.

That same day, at a press conference on Texas Tech University’s campus in Lubbock, Abbott declared that "statewide, there will not be another shutdown."

Abbott blamed local officials for failing to enforce existing restrictions, including a statewide mask mandate he put in place in July, and occupancy reductions for businesses and mandated bar closures that are triggered when the proportion of a region’s COVID-19 patients exceeds 15% of hospital capacity for seven days.

"Just getting more tools won’t mean anything," he said. "They need to be enforcing the protocols in place right now."

But three months after Abbott announced the 15% rule, a Texas Tribune analysis of state data shows that in regions with the worst outbreaks, including El Paso, Amarillo and Lubbock, the restrictions have done little to ease an overburdened health care system.

A number of local leaders — almost all Democrats — say that even with rigorous enforcement, the protocols have done little to curb the spread of the coronavirus, which is continuing to surge across the state. More than 10,000 people in Texas were hospitalized with the virus as of Monday for the first time since July, and there were fewer than 800 available intensive care beds, a near record low.

Though the arrival of the COVID-19 vaccine in Texas last week marked a historic milestone in the battle against the virus, it will be months before vaccine doses are widely available.

And many local elected officials say they’re handicapped by an executive order that blocks them from using more restrictive measures than those in place statewide.

"It’s an unfortunate reality because the virus doesn’t respond to politics," Dallas County Judge Clay Jenkins said. "It only responds to following the best medical advice from the medical experts."

Jenkins, like other local officials including Harris County Judge Lina Hidalgo, said he wants more latitude to set his own guidelines, such as closing indoor dining and limiting in-person gatherings. Without aggressive action, he said, the virus will continue to spread.

"I’m confident that those [state] restrictions alone will not bring the virus under control," Jenkins said.

Abbott spokesperson Renae Eze disagreed. "The proven course of action is to enforce the existing protocols," she said in a written statement. "That strategy was effective in slowing the spread over the summer and containing COVID-19, while allowing businesses to safely operate. The protocols work, but only if they are enforced."

Texas’ 254 counties are divided among 22 regional bodies known as trauma service areas. Once one of them exceeds the 15% benchmark for seven consecutive days, according to an October executive order, area bars must close in counties where officials had allowed them to reopen, restaurants must scale back capacity from 75% to 50% and hospitals must halt non-emergency surgical procedures.

Abbott had ordered businesses to close during the first wave of infections in the spring. The shutdown eased overloaded hospitals and new cases of COVID-19 plummeted. But Abbott quickly lifted the order amid fierce blowback from Republicans who felt he had overstepped his authority. Cases spiked again in the summer, then plateaued.

Abbott announced the 15% threshold as part of a September order that allowed restaurants to open at 75% capacity, and he explained that it would be triggered if COVID-19 patients made up 15% of "all hospitalized patients'' in a region. But in October he changed the metric to 15% of "total hospital capacity" — or total beds. The change effectively moved the goalposts, requiring more COVID-19 patients to trigger the restrictions in a given area.

The October order also allowed bars, which had been closed statewide since late June, to reopen in counties where officials opted in. Counties that did so included two that would later become COVID-19 hot spots: Randall, home to part of Amarillo, and Lubbock.

"By using that number, that overestimates our capacity to handle COVID-19 patients," he said.

Tiffany Radcliff, professor and associate dean for research at the Texas A&M University School of Public Health, said that even a trauma service area that’s below the governor’s 15% threshold "could still be struggling with new admissions for COVID-19 if there are not enough available ICU beds or trained staff to care for patients who need intensive care resources."

As of Tuesday, 10 TSAs containing more than 100 counties had crossed the 15% threshold, according to the Texas Department of State Health Services.

The additional restrictions have done little to free up hospital capacity in all but one of them, data shows.

For example, in Trauma Service Area T, which includes the border town of Laredo, the proportion of patients hospitalized with COVID-19 has steadily grown since it first crossed the 15% threshold on Nov. 14. On Monday, the region reported 14 available intensive care beds, and more than a third of available hospital beds were occupied by COVID-19 patients. That number has exceeded 24% for more than a month.

In Trauma Service Area A, home to a number of Panhandle communities including Amarillo, Abbott’s restrictions took effect on Oct. 24. In the two months since, the percentage of COVID-19 patients has largely remained above 30%, though it fell to 25% on Monday. At one point, COVID-19 patients occupied two out of every five beds. Just nine intensive care beds were available on Monday for the 25-county region.

The COVID-19 situation improved in at least one region where the enhanced restrictions took effect: the one that contains the neighboring cities of Odessa and Midland. After crossing the threshold on Nov. 17, the area remained above the 15% threshold for a couple of weeks, but has since consistently remained below the benchmark — meaning businesses can again scale up capacity.

The trauma service area that includes the Dallas-Fort Worth area is the most populous in the state currently subject to the enhanced restrictions. Since the region crossed the 15% threshold on Nov. 25, cases of COVID-19 have continued to grow, stoking fear among health officials that North Texas’ medical infrastructure will be pushed to its limits headed into another potentially catastrophic holiday season.

Dallas County did not allow bars to reopen in October, while neighboring Tarrant County did.

Jenkins, the Dallas County judge, said the enforcement of Abbott’s order is a balancing act between county and city officials and the Texas Alcoholic Beverage Commission, which regulates the state’s bars. In practice, county health officials often work in tandem with local governments to educate businesses about occupancy and mask regulations, while city code compliance officers regulate businesses within each of the county’s myriad cities.

City of Dallas officers have found nearly 23,000 infractions since early April and issued more than 6,100 notices of violation. A city spokesperson said businesses with reported violations have been very cooperative. In all, inspectors have issued just 37 citations.

Jenkins said most Dallas County businesses are likewise adhering to Abbott’s restrictions. Those that "are not acting in good faith," Jenkins said, are mostly bars and nightclubs.

A state loophole allowed these businesses to reopen under the promise that they convert themselves into restaurants. But many county officials, including Jenkins, said bars are openly flouting guidelines and the TABC is not enforcing the rules.

Chris Porter, a TABC spokesperson, said agents have conducted more than 26,000 inspections statewide since June 26 and found about 700 instances of noncompliance. About 200 of those led to a 30-day liquor license suspension, he said.

"TABC has been conducting inspections across the state and our agents are monitoring compliance to ensure bars and restaurants are following the governor’s COVID-19 executive orders," Porter said in a statement. "What we’ve found is that the majority of businesses — more than 97% — are committed to operating safely and have taken thorough steps to ensure the health of their customers and employees."

TABC dispatched about 20 additional agents to both the El Paso and Lubbock regions, Porter said, to assist local officials with enforcement.

But even the added personnel isn’t enough to monitor county bars that are operating under the state loophole or are not complying with mandated closures, said El Paso County Judge Ricardo Samaneigo, who did not allow bars to reopen in October. The region has remained above the 15% threshold since Oct. 12, and the additional restrictions have done little to ease the burden on a health care system that has been pushed to the brink for months.

By the time a state appeals court struck down the shutdown order on Nov. 13, it had been in effect for 14 days. New cases and hospitalizations have since fallen from their November peaks, though 490 people were hospitalized and the county reported more than 35,700 active infections on Tuesday.

Earlier this month, Eze, Abbott’s spokesperson, pointed to El Paso as evidence that the governor’s restrictions are effective at curbing the spread of the virus. But Samaniego credits the progress to his stay-at-home order.

"I think we proved that we did help the spread because, whether I was allowed to, I actually did the 14 days," Samaneigo said. "I really believe that the numbers aren’t going as high as other places because of our curfew and our shutdown."

The few tools left for local officials, who are barred from imposing measures more restrictive than those in place at the state level, can be difficult to enforce, Samaneigo said.

A statewide mask mandate remains in effect, but authorities can issue fines for disobeying the mandate only on the second documented offense. Fines for violating reduced capacity restrictions or closure requirements are capped at $1,000 and scofflaws cannot be jailed.

In most cases, local officials said they focus on educating wrongdoers instead of punishing them.

"Our practice is to work with businesses," said Dillon Meek, the mayor of Waco, where advanced restrictions first took effect on Nov. 29, after McLennan County Judge Scott Felton had allowed bars to reopen in October. "We issue a warning first, before we issue a citation. It’s generally a productive means."

Since the start of the pandemic in late March, Meek said the city’s enforcement team has issued 316 warnings and 30 citations.

In Lubbock, lines of often maskless people still flow from the city’s bars and restaurants, said Dr. Ron Cook, the city’s health authority. Restrictions under Abbott’s order have been in place since Oct. 25. Meanwhile, the city reported 245 people hospitalized with the virus on Sunday, down from a peak of 360 in late November but still enough to concern local health officials.

"Masking is required — the problem is it isn’t an enforceable mandate," Cook said. "There’s no teeth behind the mandate."

In a state as large and diverse as Texas, Cook said local governments need the power to respond to mounting cases as they see fit. Cook and other health experts warned, despite the start of the vaccine rollout, COVID-19 remains a dire threat and large holiday gatherings could prove devastating.

"We’re still pedaling and treading water and doing everything we can to take care of our patients," Cook said.

Disclosure: Texas A&M University and Texas Tech University have been financial supporters of The Texas Tribune, a nonprofit, nonpartisan news organization that is funded in part by donations from members, foundations and corporate sponsors. Financial supporters play no role in the Tribune's journalism. Find a complete list of them here.

"Gov. Greg Abbott allows only limited COVID-19 restrictions for Texas' worst hot spots. Local leaders say it's not enough." was first published at https://www.texastribune.org/2020/12/22/texas-coronavirus-restrictions/ by The Texas Tribune. The Texas Tribune is proud to celebrate 10 years of exceptional journalism for an exceptional state.