Volunteers from North Texas are mobilizing to help the dozens families whose homes were destroyed by the EF-3 tornado Monday.

DALLAS - Volunteers from North Texas are mobilizing to help the dozens families whose homes were destroyed by the EF-3 tornado Monday.

The Texas Baptist Men, a local group that responds to natural disasters all over the country, headed to Jacksboro with about 50 volunteers to help with the recovery efforts including providing cleaning supplies, laundry services and more. They are also heading to other locations impacted by tornadoes.

Resources are also getting stretched thin for the organization that is also working to help evacuees of the wildfires southwest of Fort Worth, as well as Ukrainian refugees.

Members are also teaming up with a Jacksboro pastor who lost his house but remains focused on helping others.

"Instead of talking about his house, he said, ‘Come. We’re going to open all the doors. Stay at First Baptist Church. From there you can have a headquarters, a base to serve our community.’ That’s what he’s focused on. He’s putting his needs on the back burner. He’s putting his community first. And it’s those kind of people who rise up in these situations who are the real heroes," said John Hall, a member of the Texas Baptist Men.

Texas Baptist Men are providing an RV for First Baptist Church Jacksboro Pastor Jack Maddox's family until they are able to get long term housing.

"Beautiful home, many pastors have raised their families there and it's gone," Maddox said. "We have five children and our youngest is 17, and he's a junior here at Jacksboro High School. Shout out to our tigers. He is very excited that he's not going to have to sleep in the same room with mom and dad."

Pastor Maddox said the tornado destroyed the homes of at least three other families in his church.

Wednesday, volunteers with Texas Baptist Men worked to mobilize their command center at the church's parking lot for 50 volunteers who will go out into neighborhoods to help with clean-up efforts.

"We'll have two chainsaw crews who will come in here, and they'll come in with their equipment, their chainsaw trailers with all the saws and everything they need to take trees off of houses and off of properties and get them to the curb," explained David Wells, director of disaster relief for Texas Baptist Men. "We do safety training with everything, and so they have all that personal protection equipment on those trailers too, and none of our cutters unless they've been trained. We make sure everybody's doing everything safely."

But with crews also helping victims of the Eastland County wildfires and Ukrainian refugees in Poland, the organization is stretched thin.

"We have to divide and conquer. The Lord has blessed us with teams to do that," Wells added. 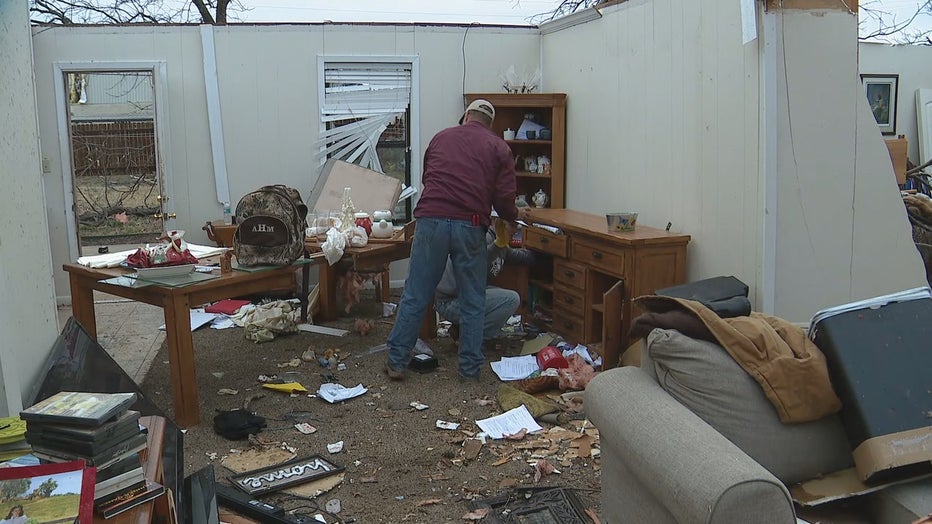 Jack County Emergency Management said it is still assessing homes and businesses to get an accurate count on damage. An estimated 90 homes were destroyed by an EF-3 tornado that hit the area.

Four people had to be rescued from their homes and nine people were rushed to the hospital. But no one was seriously injured.

Kenneth Dunn is one of the many people whose home was destroyed. The only part of his house still covered is the laundry room where he, his wife, his 18-year-old son and his handicapped mother-in-law took shelter.

He said he used himself as a human shield as the tornado ripped through their neighborhood in Jacksboro.

Winds up to 150 miles per hour ripped the front of homes right off, tore down brick walls and launched debris into the air.

There is still a lot to clean up in Jacksboro after an EF-3 tornado destroyed at least 90 homes in Jack County. Officials are still working to assess the full damage, including businesses and other structures.

"I hovered over them in case anything came down I would be on top of them," he said. "Not much you can do but cry about it and then pick the pieces back up. It will probably hit me in a couple of days when they tear the house down."

Two Jacksboro schools were also in the twister’s path. Hundreds of students and staff huddled in concrete hallways. Parents ditched their cars in the pickup line for safety.

Oncor reportedly worked through the night to try to restore power to the homes where the electricity can be turned back on. It hopes to have the lights back on by the end of the day.

Gov. Greg Abbott also declared an emergency for Jack County and 15 others affected by the tornado outbreak to help with the recovery efforts.

A local group that responds to natural disasters all over the country is headed to Jacksboro to help with recovery efforts after Monday's tornado. FOX 4's Hanna Battah has more.

4 rescued from homes in Bowie after two EF-1 tornadoes