LeBron James scolds media for not talking more about Jerry Jones, suggests race has something to do with it

Jones came under fire in a story in The Washington Post last week over the photo. He was in the crowd consisting of White students attempting to deny access to six Black students at North Little Rock High School.

LeBron James took the opportunity on Wednesday to scold reporters for failing to ask him any questions about Dallas Cowboys owner Jerry Jones' recent controversy surrounding him and suggested it had something to do with race.

After the Los Angeles Lakers defeated the Portland Trail Blazers 128-109 behind James’ 31 points, eight assists and seven rebounds, the superstar forward asked the media why no had asked him questions about Jones and the recent photo unearthed which showed Jones as a teenager with students trying to keep an Arkansas school segregated in 1957.

"I got one question for you guys before you guys leave. I was thinking when I was on my way over here, I was wondering why I haven't gotten a question from you guys about the Jerry Jones photo," James asked, via ESPN. "But when the Kyrie [Irving] thing was going on, you guys were quick to ask us questions about that."

Kyrie Irving was teammates with James when the two were on the Cleveland Cavaliers. Irving’s game-winning shot in 2016 delivered the Cavaliers’ first NBA championship over the Golden State Warriors– and James’ third. The two had a less-than-amicable end to their time.

James said Irving "caused harm" when he tweeted a link to an antisemitic movie.

Jones came under fire in a story in The Washington Post last week over the photo. He was in the crowd consisting of White students attempting to deny access to six Black students at North Little Rock High School. The event occurred just a few weeks before the Little Rock Nine integrated Little Rock Central High School less than five miles away in what turned out to be one of the biggest moments of the civil rights movement. 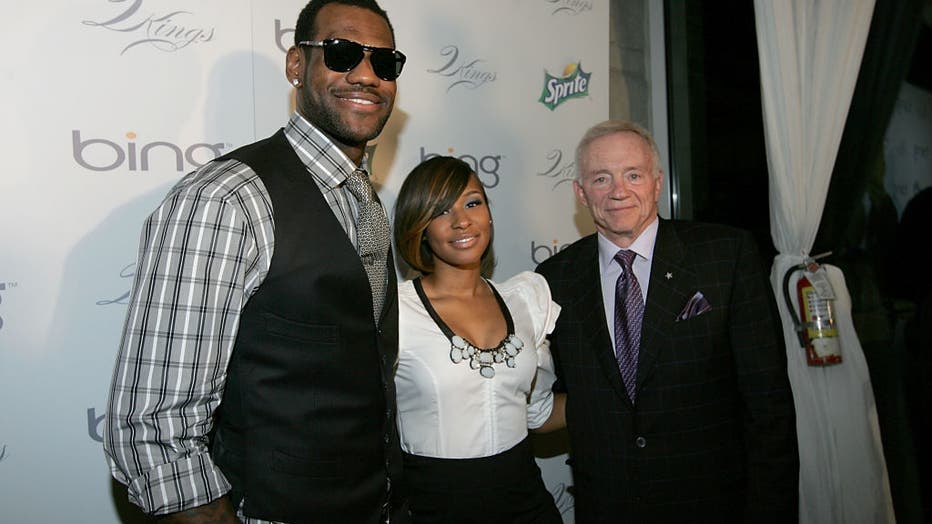 Jones has acknowledged that it is him in the photograph, but he says he did not participate in protesting the integration and looked on curiously without animosity.

"When I watch Kyrie talk and he says, 'I know who I am, but I want to keep the same energy when we're talking about my people and the things that we've been through,' and that Jerry Jones photo is one of those moments that our people, Black people, have been through in America," James said. "And I feel like as a Black man, as a Black athlete, as someone with power and a platform, when we do something wrong, or something that people don't agree with, it's on every single tabloid, every single news coverage, it's on the bottom ticker. It's asked about every single day.

"But it seems like to me that the whole Jerry Jones situation, photo -- and I know it was years and years ago and we all make mistakes, I get it -- but it seems like it's just been buried under, like, 'Oh, it happened. OK, we just move on.' And I was just kind of disappointed that I haven't received that question from you guys."

Jones told The Washington Post he was "curious" about the situation which is why he was present at the situation, adding "I don't know that I or anybody anticipated or had a background of knowing … what was involved."

James was famously a fan of the Cowboys but said in October he stopped being a fan because of the team’s stance on kneeling during the national anthem.

"There was just a lot of things that was going on during when guys were kneeling, and guys were having freedom of speech," James said. "They wanted to do it in a very peaceful manner. A lot of people in their front office and a lot of people that ran the organization was like, ‘If you do that around here, then you will never play for this franchise again.' And I just didn’t think that was appropriate."