The change is part of Nestlé's plan to use only 100-percent recyclable packaging for its candy by 2025.

KOBE CITY, Japan - Nestlé Japan is swapping out the plastic packaging on miniature KitKat bars — which are extremely popular in Japan and come in flavors not easily found in the U.S., such as matcha and wasabi — and opting for paper instead as part of Nestlé's plan to use only 100-percent recyclable packaging for its candy by 2025.

The new paper wrappers are being rolled out for KitKat minis first, then Nestlé Japan will follow up with a paper outer package for large KitKats in September of 2020 and single-layer paper wrappers for individual KitKats in 2021.

The new environmentally friendly wrappers come with instructions on how to transform the empty wrapper into a traditional origami crane, known as an orizuru. 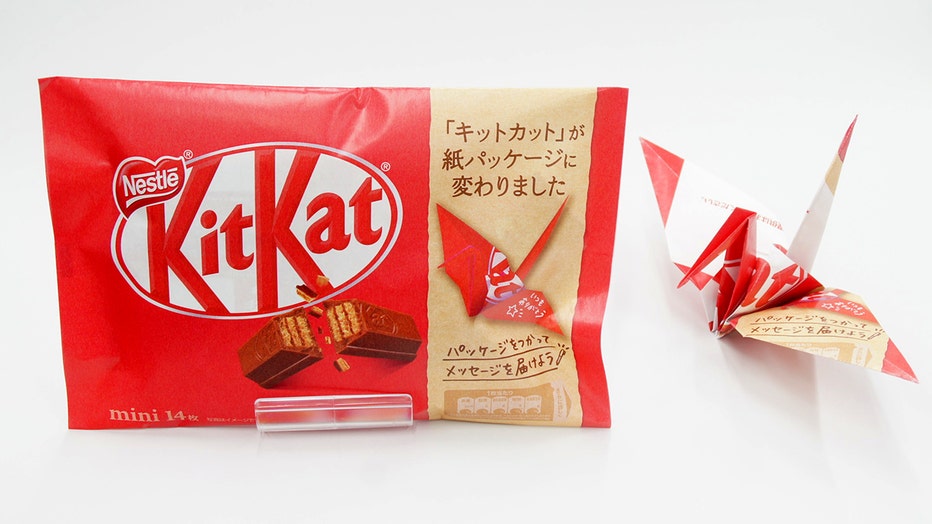 Nestlé Japan is swapping out the plastic packaging on miniature KitKat bars for paper. The new packaging design come with instructions on how to turn the wrapper into an origami crane. (Nestlé Japan)

Japan sells the most KitKats in the world, and Nestlé Japan expects to reduce plastic waste by an estimated 380 tons per year as a result of the packaging change.

"We want to be a leader in developing the most sustainable packaging solutions for our food and beverage products," said Nestlé CEO Mark Schneider.

Nestlé unveiled its plans for a waste-free future in April of last year, citing a desire to keep packaging material from becoming waste in the planet’s seas, oceans and waterways as a major motivation for the changes.

In December, the company announced the creation of the Nestlé Institute of Packaging Sciences, a new division of Nestlé’s global research organization, which evaluates various sustainable packaging material options.

"Plastic waste is one of the biggest sustainability issues the world is facing today. Tackling it requires a collective approach. We are committed to finding improved solutions to reduce, re-use and recycle." said Schneider.