President Joe Biden traveled to the tornado-ravaged state of Kentucky to survey damage from last week’s deadly storms and offer federal support for the victims. During his remarks, he authorized the government to cover 100 percent of the state’s costs for the first 30 days for all emergency work and services related to the devastation.

MAYFIELD, Ky. - Employees who survived a tornado that leveled a candle factory in Mayfield, Kentucky, have filed a lawsuit against the company, claiming it demonstrated "flagrant indifference" by refusing to allow the workers to leave early.

The lawsuit was filed in state court against Mayfield Consumer Products, according to the Associated Press. It seeks compensatory and punitive damages from the company.

Representatives for Mayfield Consumer Products did not immediately return a request for comment in response to the suit. But the candle company announced earlier week that it will give each employee $1,000 to help with expenses and perform an independent review of its emergency protocols.

More than 30 tornadoes tore through Kentucky and four other states over the weekend, killing at least 89 people — 75 of them in Kentucky. Over 100 people were working on holiday candle orders at the Mayfield Consumer Products factory when a twister leveled the facility, killing eight employees.

RELATED: Tornado relief: How to help victims in Kentucky, other states

The employees’ lawsuit claims the factory had "up to three and half hours before the tornado hit its place of business to allow its employees to leave its worksite as safety precautions."

The factory showed "flagrant indifference to the rights" of the workers by refusing to do so, the lawsuit said. 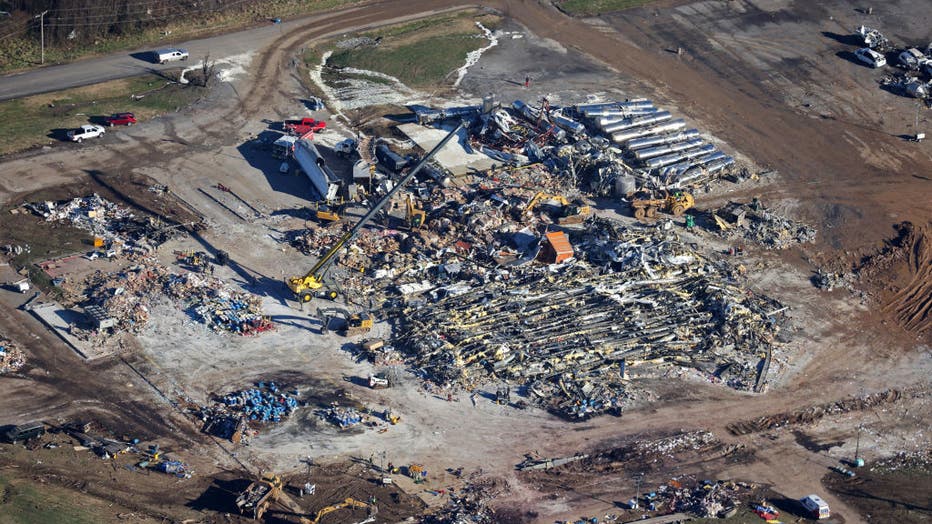 In this aerial view, crews clear the rubble at the Mayfield Consumer Products candle factory after it was destroyed by a tornado three days prior, on Dec. 13, 2021, in Mayfield, Kentucky. (Photo by Scott Olson/Getty Images)

The scale of the damage initially stoked fears that scores of workers could be found dead in the rubble. The company later said many employees who survived left the site and went to homes with no phone service, adding to the confusion over who was missing.

Since then, all workers have been accounted for, according to state and local officials who have spoken to Mayfield Consumer Products.

In addition to the company’s independent review, Gov. Andy Beshear said that the Kentucky Division of Occupational Safety and Health Compliance would conduct an investigation, which is routine whenever workers are killed on the job.

"So it shouldn’t suggest that there was any wrongdoing. But what it should give people confidence in, is that we’ll get to the bottom of what happened," Beshear said.

The company supplies candles to retailers, including Bath & Body Works, and is the county’s third-largest employer.

An employee previously told the Associated Press that a supervisor threatened her with written disciplinary action if she went home early because storms were approaching.

Haley Conder, who worked at the Mayfield Consumer Products factory on and off for 10 years, also questioned why the company did not encourage workers to go home — or at least give them a better understanding of the danger — between a first tornado siren around 6 p.m. Friday and another one around 9 p.m., shortly before the tornado hit.

"They (the company) had from 6 o’clock to 9 o’clock to allow us to go home, to tell us really what was going on and that we needed to prepare ourselves for the worst," Conder told The Associated Press in a phone interview. "It was nothing like that. Not one supervisor told us what was really going on."

In a statement earlier this week to the Associated Press, a spokesman for the company insisted that employees were free to leave at any time.

The storms that began Friday night destroyed lives and property from Arkansas to Illinois and in parts of neighboring states, carving a more than a 200-mile path through Kentucky alone. The storms leveled homes, downed power lines and cut off residents from key utilities as temperatures dropped below freezing in Kentucky earlier this week.

A tornado ripped through Mayfield, Kentucky late Friday, leaving behind a trail of catastrophic and deadly destruction. Credit: Elora Harkness via Storyful

In Bowling Green, 15 people died as a result of the storms, including 11 people on one street and a man who suffered a fatal heart attack while cleaning storm debris at his daughter's home.

President Joe Biden visited the state on Wednesday to comfort those who suffered grievous losses in the storms and to offer federal support.

"The scope and scale of this destruction is almost beyond belief," Biden said. "These tornadoes devoured everything in their path."

The president authorized the federal government to cover 100% of the state’s costs for the first 30 days for all emergency work and services related to the devastation.

"I’m going to make sure the federal government steps up and makes sure we do every, single thing," Biden added.