AUSTIN, Texas - An iconic Austin mural is back to its original form after it was defaced with spray paint. The artist behind the mural says it's the third time something like this has happened.

The 'Greetings from Austin' mural was vandalized with spray paint at some point between Tuesday, October 8 and Wednesday, October 9. 'JUSTICE 4 BOTHAM NO APPEAL' was written across the mural in red spray paint. 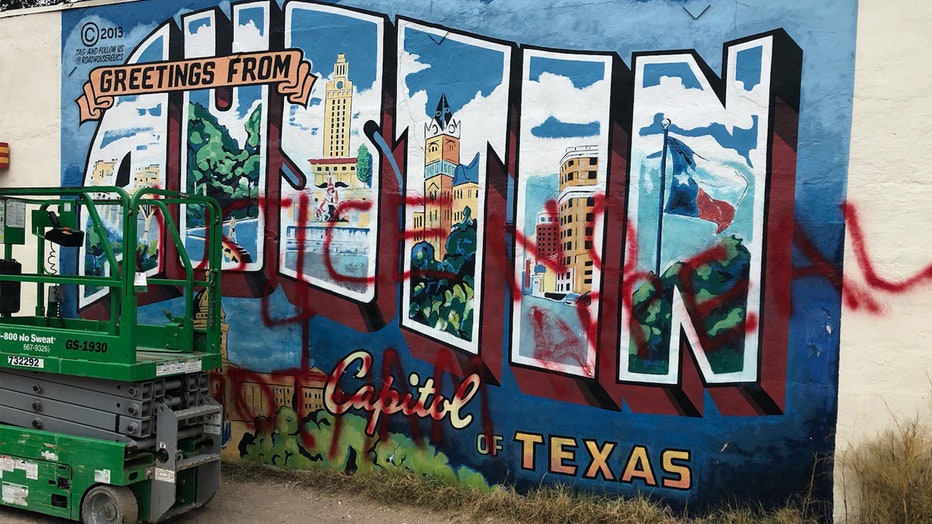 The mural is located at Annie Street and South First Street.

Todd Sanders is the artist and painted the mural in 1997. He spent most of yesterday (10/9) repainting and cleaning it up.

Sanders says every time someone sprays graffiti on the mural he loses hope with it. He also says that if the person responsible for the vandalism feels so strongly about something that they should go paint a mural that states the message and stop painting over his.

Back in July the mural was vandalized with the message "Welcome to Austin - Don't Forget to Leave."

This time the message came after the recent trial of former Dallas police officer Amber Gugyer who was found guilty in the shooting death of Botham Jean.

Jean was a man who was shot and killed by Guyger. She said she mistook the victim’s apartment for her own in September 2018. The shooting drew widespread attention because of the strange circumstances and because it was one in a string of shootings of unarmed black men by white police officers.

Last week, Guyger was sentenced to ten years in prison for the murder of Jean. Jurors could have sentenced the former officer to up to life in prison or as little as two years, but prosecutors asked them to send her to prison for 28 years, which is how old Jean would have been if he was still alive. The 10-year sentence, which will make Guyger eligible for parole after five years, was met with boos and jeers by the crowd outside of the packed courtroom.

The mural is located at the intersection of Annie Street and South First Street in South Austin.

The mural, which resembles a postcard, is a popular place to take a selfie or group picture.