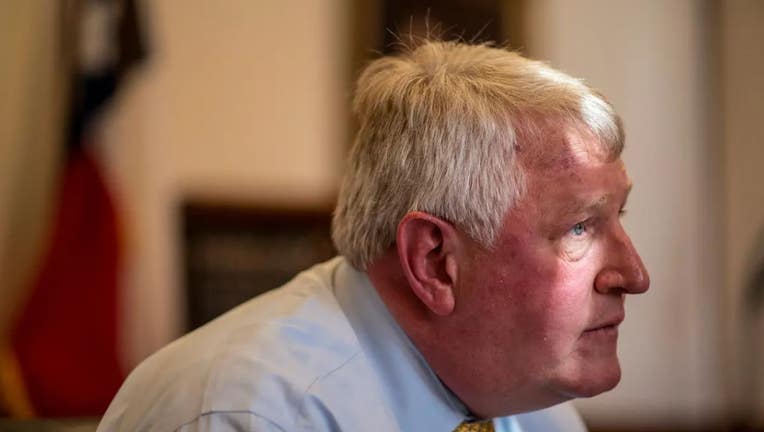 Secretary of State John Scott announced his resignation on Monday. He will step down as the state’s top elections official at the end of the year. Credit: Sergio Flores for The Texas Tribune

Texas Secretary of State John Scott will step down from his role as the state’s top elections official at the end of the year.

"When I took office as Texas Secretary of State in October of last year, I did so with a singular goal and mission in mind: to help restore Texas voters’ confidence in the security of our state’s elections," Scott wrote in a letter to Gov. Greg Abbott on Monday. Scott said he would be returning to private practice.

Scott has served as interim secretary of state since last October, but he has struggled to walk the line between reassuring the public that the state’s elections are safe and secure and entertaining questions from some vocal critics who cast doubt on the integrity of elections. The Dallas Morning News first reported the departure.

His announcement comes a month before the start of the legislative session, when the Texas Senate would have considered his permanent appointment to the post.

Scott oversaw four elections during his time as secretary of state. He also supervised an audit of the 2020 elections — which critics have falsely said had outsized voter fraud leading to President Joe Biden's victory over Donald Trump — in four of the state's largest counties. The first phase of the audit was released on New Year's Eve 2021 and found no significant evidence of widespread fraud.

A news release by Scott's office said he would release the findings of the audit before his departure on Dec. 31.

Disclosure: The Texas secretary of state has been a financial supporter of The Texas Tribune, a nonprofit, nonpartisan news organization that is funded in part by donations from members, foundations and corporate sponsors. Financial supporters play no role in the Tribune’s journalism. Find a complete list of them here.

This article originally appeared in The Texas Tribune.