The 39th president survived a dire cancer diagnosis in 2015 and surpassed George H.W. Bush as the longest-lived U.S. president in history this spring.

The former president still lives in tiny Plains, Georgia, located about 150 miles south of Atlanta, and planned no public celebrations on Tuesday.

But he's had plenty to say recently, warning that re-electing President Donald Trump would be "a disaster" and expressing hopes that his Carter Center will become a more forceful advocate against armed conflicts in the future, including "wars by the United States."

RELATED: Jimmy Carter says 4 more years of President Trump would be a 'disaster'

During his annual Carter Center report last month, Carter said he would like the U.S. to be the “number one champion” of human rights, peace and equality in the future.

"We have been at war more than 226 years. We have been at peace for about 16 years" since the Declaration of Independence in 1776, he said. And every U.S. military conflict from the Korean War onward has been a war of "choice," he said.

The 39th president survived a dire cancer diagnosis in 2015 and surpassed George H.W. Bush as the longest-lived U.S. president in history this spring. He's had some trouble walking after a hip replacement in May, but still teaches Sunday School in Plains.

He still plans an upcoming trip to help build houses with Habitat for Humanity in Nashville, Tennessee with his wife, Rosalynn, now 92. The couples has been married for 73 years. 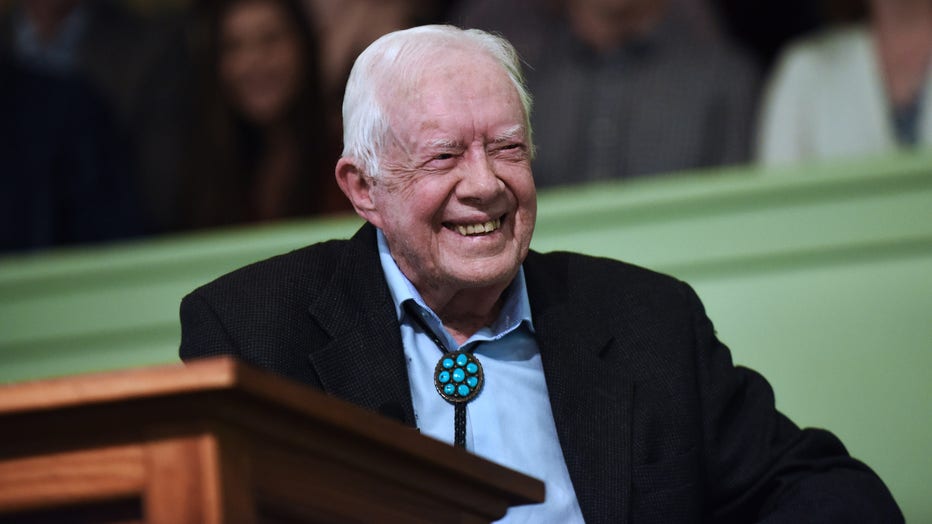 Former U.S. President Jimmy Carter speaks to the congregation at Maranatha Baptist Church before teaching Sunday school in his hometown of Plains, Georgia on April 28, 2019. (Photo by Paul Hennessy/NurPhoto via Getty Images)

In his latest appearance at the Carter Center and in a town hall at Emory University, Carter blasted money in politics, urged action to combat the climate crisis, and celebrated the Carter Center's work on public health, election monitoring and conflict resolution. But he said the center can do more to constructively criticize U.S. military engagements. The Carter Center has "never voiced an opinion publicly" on individual wars, he said with some regret, adding: "This is primarily my fault."

"The United States is very deeply inclined to go to war," Carter said, partly to "implant American policies" in other countries, and partly to "make a hero" out of wartime commanders in chief. This has significant economic consequences, he said: China has "been at peace" since he normalized relations with Beijing in 1979, and while the U.S. has spent trillions on military conflict, China has invested similar amounts in high-speed rail, new college campuses and other infrastructure.

Carter talks with the realism of a nonagenarian, born in 1924 when the world population was quarter of what it is today and life expectancy for American males was 58 years. Saying he plans to start spending more time with his extended family, he told the Carter Center audience that "this may be our last conversation with you ... we may or may not have one next year."

Carter has been accepting visits from several 2020 presidential candidates, but he's held back on endorsing any of his fellow Democrats, offering only clues to his thinking.

“I’m going to vote for one of them, and I haven’t decided yet which one,” Carter said. “I voted for Bernie Sanders last time. But I’m going to keep an open mind. One of the major factors I will have in my mind is who can beat Trump.”

Carter also said he'd like to see a woman as president. The former president, who left office in 1981 after losing his re-election bid to Ronald Reagan, was also asked at last month's event if he had considered running in 2020 since he technically still could.

"I hope there's an age limit," Carter told the crowd with a laugh. "If I were just 80 years old, if I was 15 years younger, I don't believe I could undertake the duties I experienced when I was president."

He said the job requires a president "to be very flexible with your mind," especially related to foreign affairs.

Not many presidents have lived into their 90s. The list includes Carter himself, George H.W. Bush, John Adams, Herbert Hoover, Ronald Reagan and Gerald Ford.

The public was encouraged to wish Carter a happy birthday on his foundation’s website.