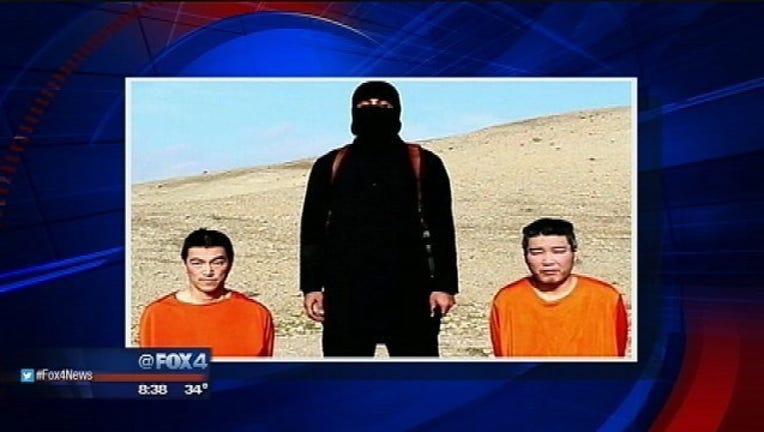 TOKYO (AP) -- Japanese officials said Saturday they were investigating a new online message purporting to be from the extremist Islamic State group about the two Japanese hostages it holds.

The purported message claimed one hostage has been killed and demanded a prisoner exchange for the other. But the post was deleted quickly, and militants on a website affiliated with the Islamic State group disagreed about the message's authenticity.

The Associated Press could not verify the contents of the message, which varied greatly from previous videos released by the Islamic State group, which now holds a third of both Syria and Iraq.

Prime Minister Shinzo Abe told reporters as he rushed into his office that the release of the new message was "an outrageous and unforgivable act. We demand their immediate release."

Kyodo News agency reported that the same video has been emailed to the wife of one of the hostages.

The Islamic State group had threatened on Tuesday to behead the men within 72 hours unless it received a $200 million ransom.

Japan has scrambled for a way to secure the release of 47-year-old Kenji Goto, a journalist, and Haruna Yukawa, a 42-year-old adventurer fascinated by war. Japanese diplomats had left Syria as the civil war there escalated, adding to the difficulty of contacting the militants holding the hostages.

One militant on the Islamic State-affiliated website warned that Saturday's new message was fake, while another said that the message was intended only to go to the Japanese journalist's family.

A third militant on the website noted that the video was not issued by al-Furqan, which is one of the media arms of the Islamic State group and has issued past videos involving hostages and beheadings. Saturday's message did not bear al-Furqan's logo.

The militants on the website post comments using pseudonyms, so their identities could not be independently confirmed by the AP. However, their confusion over the video matched that of Japanese officials and outside observers.

Japanese officials have not directly said whether they are considering paying any ransom. Japan has joined other major industrial nations in the Group of Seven in opposing ransom payments. U.S. and British officials said they advised against paying.

Goto's mother made an appeal for the journalist's rescue.

"Time is running out. Please, Japanese government, save my son's life," said Junko Ishido. "My son is not an enemy of the Islamic State."

Ishido said she was astonished and angered to learn from her daughter-in-law that Goto had left for Syria less than two weeks after his child was born in October to try to rescue Yukawa.