NASA shared additional images from the $10 billion telescope’s initial outward gazes, including two images of nebulas where stars are born and die in spectacular beauty and another shot showing an update of a classic image of five tightly clustered galaxies that dance around each other.

While other telescopes, including the Hubble Space Telescope, have previously examined the Cartwheel Galaxy, located approximately 500 million light-years away in the Sculptor constellation, NASA said a large amount of dust has obscured the view.

But its new James Webb telescope, which has an ability to detect infrared light, revealed new details about star formation and the galaxy's central black hole, NASA said.

The Cartwheel Galaxy's appearance, which resembles the wheel of a wagon, is the result of an "intense event," astronomers said, attributing it to a "high-speed collision between a large spiral galaxy and a smaller galaxy."

The Cartwheel has two rings - a bright inner ring and an outer, colorful one - making it a "ring galaxy," which is a structure less common than spiral galaxies like the Milky Way. 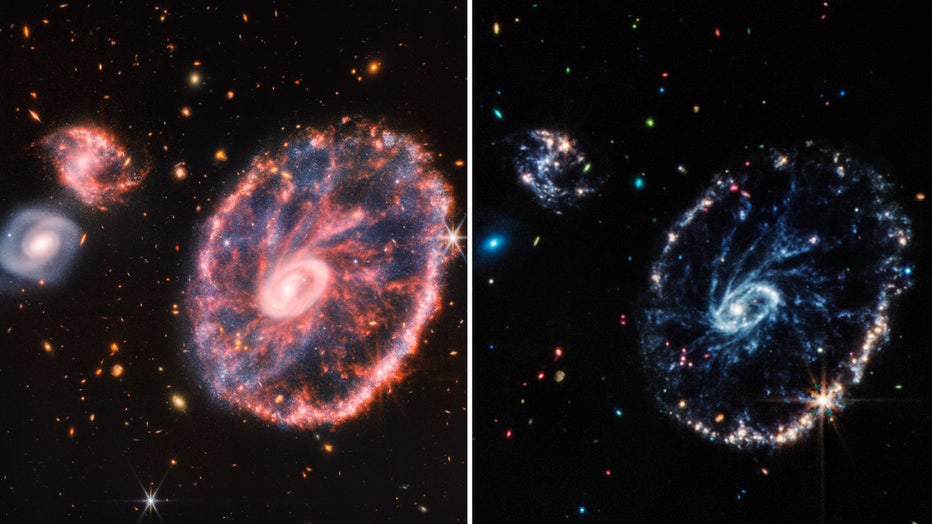 Left image: A large pink, speckled galaxy resembling a wheel with with a small, inner oval, with dusty blue in between on the right, with two smaller spiral galaxies about the same size to the left against a black background. Right image taken from J

Astronomers noted that the new image shows how the bright core contains a "tremendous amount of hot dust with the brightest areas being the home to gigantic young star clusters."

Meanwhile, they said the outer ring, which has expanded for about 440 million years, is dominated by star formation and supernovas.

"As this ring expands, it plows into surrounding gas and triggers star formation," NASA astronomers wrote.

But they said the telescope's image shows that the Cartwheel galaxy is in a transitory stage, and was presumably a normal spiral galaxy like the Milky Way before its collision.

"While Webb gives us a snapshot of the current state of the Cartwheel, it also provides insight into what happened to this galaxy in the past and how it will evolve in the future," astronomers said.

What is the James Webb Space Telescope?

The world’s biggest and most powerful space telescope rocketed away last December from French Guiana in South America. In January, it reached its lookout point of 1 million miles from Earth.

That’s when the lengthy process began to align the mirrors, get the infrared detectors cold enough to operate, and calibrate the science instruments — all protected by a sunshade the size of a tennis court that keeps the telescope cool.

The plan is to use the telescope to peer back so far that scientists will get a glimpse of the early days of the universe about 13.7 billion years ago and zoom in on closer cosmic objects, even our own solar system, with a sharper focus.

After years of delays, NASA's James Webb Telescope blasted off into space on Dec. 25, 2021. It's now the biggest and most powerful tool for exploring space that's ever been built.

The Hubble Space Telescope was launched into orbit by space shuttle Discovery in 1990, helping scientists to better understand how planets and galaxies form with its own awe-inspiring images.

Specifically, Webb is designed to peer deeper into space to see the earliest stars and galaxies that formed in the universe and to look deep into nearby dust clouds to study the formation of stars and planets, NASA says. To do this, Webb has a much larger primary mirror than Hubble — 2.7 times larger in diameter — which gives it more light-gathering power.

Hubble has stared as far back as 13.4 billion years, disclosing a clumpy runt of a galaxy that is currently the oldest and farthest object ever observed. Astronomers are eager to close the 300 million-year gap with Webb and draw ever closer in time to the Big Bang, the moment the universe formed 13.8 billion years ago.

How far back past 13 billion years did that first image look? NASA didn't provide any estimate on Monday. Outside scientists said those calculations will take time, but they are fairly certain somewhere in the busy image is a galaxy older than humanity has ever seen, probably back to 500 million or 600 million years after the Big Bang.

"It takes a little bit of time to dig out those galaxies," University of California, Santa Cruz, astrophysicist Garth Illingworth said. "It's the things you almost can't see here, the tiniest little red dots."

RELATED: James Webb Space Telescope to be featured on US postage stamp

"This is absolutely spectacular, absolutely amazing," he added. "This is everything we’ve dreamed of in a telescope like this."

The deepest view of the cosmos "is not a record that will stand for very long," project scientist Klaus Pontoppidan said during the briefing, since scientists are expected to use the Webb telescope to go even deeper.