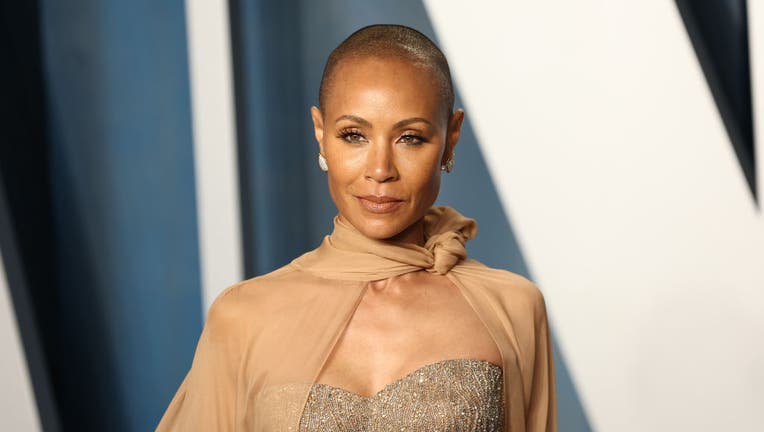 LOS ANGELES - Jada Pinkett Smith is back on the red carpet.

The 50-year-old actress had her first public appearance on Saturday night since The Academy banned Will Smith from the Oscars for slapping Chris Rock.

Pinkett Smith was joined by Shonda Rhimes and Debbie Allen at the grand opening of the Rhimes Performing Arts Center, which will also be the home for Debbie Allen’s Dance Academy.

Pinkett Smith was all smiles on the red carpet and was seen a strapless, gold dress, with matching earrings and heels.

Smith acknowledged the motion picture academy’s decision to ban him from the Oscars for 10 years on Friday.

Will Smith vs. Chris Rock: What led up to the Oscars slap and what happened after

Will Smith slapped Chris Rock during the Oscars after he made a joke about his wife's hair loss. Here's a look at the timeline of events before and after the altercation.

"I accept and respect the academy’s decision," the actor said in a statement obtained by Fox News Digital.

On Friday, the academy announced that Smith was banned from attending the Oscars or any other academy event for 10 years following his slap of presenter Chris Rock at this year’s ceremony. The decision came after a meeting of the academy’s board of governors to discuss a response to Smith’s actions.

"This action we are taking today in response to Will Smith's behavior is a step toward a larger goal of protecting the safety of our performers and guests and restoring trust in the academy. We also hope this can begin a time of healing and restoration for all involved and impacted."

Academy President David Rubin called for Friday's board meeting just days ago. The meeting was originally scheduled for April 18 but was moved up due to Smith's resignation April 1.

Will Smith banned after slap at the Oscars: The Academy hands down their punishment

"The 94th Oscars were meant to be a celebration of the many individuals in our community who did incredible work this past year; however, those moments were overshadowed by the unacceptable and harmful behavior we saw Mr. Smith exhibit on stage," the board of governors said in a letter.

"During our telecast, we did not adequately address the situation in the room. For this, we are sorry. This was an opportunity for us to set an example for our guests, viewers and our academy family around the world, and we fell short — unprepared for the unprecedented.

"Today, the board of governors convened a meeting to discuss how best to respond to Will Smith's actions at the Oscars, in addition to accepting his resignation. The board has decided, for a period of 10 years from April 8, 2022, Mr. Smith shall not be permitted to attend any academy events or programs, in person or virtually, including but not limited to the Academy Awards.

"We want to express our deep gratitude to Mr. Rock for maintaining his composure under extraordinary circumstances. We also want to thank our hosts, nominees, presenters and winners for their poise and grace during our telecast."

"This action we are taking today in response to Will Smith's behavior is a step toward a larger goal of protecting the safety of our performers and guests and restoring trust in the academy. We also hope this can begin a time of healing and restoration for all involved and impacted."

Pinkett Smith has yet to publicly address the incident.

Fox News’ Stephanie Nolasco contributed to this report. Read more of this story on FOX News.