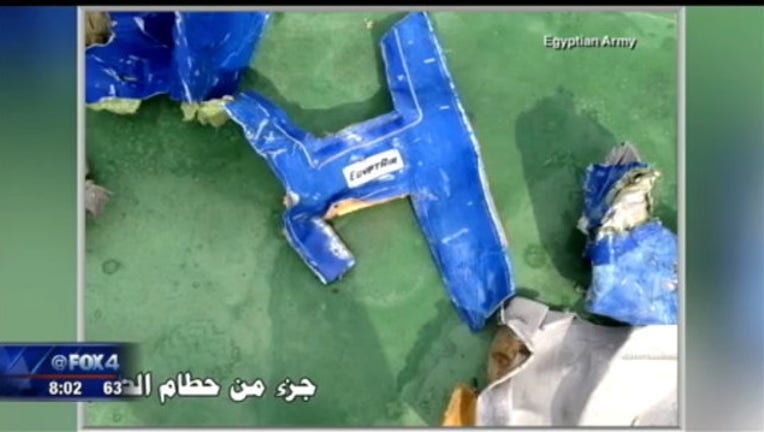 CAIRO (AP) — Smoke was detected in multiple places on EgyptAir flight 804 moments before it plummeted into the Mediterranean, but the cause of the crash that killed all 66 on board remains unclear, the French air accident investigation agency said on Saturday.

The messages, he explained, "generally mean the start of a fire," but he added: "We are drawing no conclusions from this. Everything else is pure conjecture."

An aviation industry publication has earlier reported that sensors detected smoke in a lavatory, suggesting a fire onboard before the aircraft went down.

The publication cited information transmitted through the plane's Aircraft Communications Addressing and Reporting System, or ACARS, which transmits data from the plane to the ground in the form of a series of messages. Those messages showed that smoke was detected in the plane's lavatory near the cockpit, according to the report.

David Learmount, a widely respected aviation expert and editor of the authoritative Flightglobal magazine, said the readings reported by the Aviation Herald suggested a quick-spreading fire.

"The question now is whether the fire that caused the smoke was the result of an electrical fault — for example a short-circuit caused by damaged wiring — or whether some form of explosive or incendiary device was used," he wrote on his website.

In the absence of a claim of responsibility, it's still unclear whether the crash was the result of a fault or an attack, he wrote.

"That answer is unlikely to be forthcoming soon."

Looking for clues to whether terrorists may have brought down the Airbus A320, investigators have been poring over the passenger list and questioned ground crew members at Charles de Gaulle Airport in Paris, from which the plane took off.

The aircraft had been cruising normally in clear skies on a nighttime flight to Cairo early Thursday when it suddenly lurched left, then right, spun all the way around and plummeted 38,000 feet (11,582 meters) into the sea, never issuing a distress signal.

Search crews are scouring for further wreckage of the aircraft. Experts said answers will come only with an examination of the wreckage and the plane's cockpit voice and flight data recorders, commonly known as black boxes.

Planes and vessels from Egypt and five other countries — Greece, Britain, France, the United States and Cyprus — continued searching a wide area of the eastern Mediterranean on Saturday, a day after the Egyptian military found debris from the passenger jet in the sea 180 miles (290 kilometers) north of the Egyptian port city of Alexandria.

On Saturday, the Egyptian military released photographs of the debris from EgyptAir flight 804. The photos were posted on the Facebook page of the chief military spokesman. They appear to show the heavily-damaged remains of plane seats, life jackets — one of which was seemingly undamaged — and a scrap of cloth that looks to be part of a baby's purple and pink blanket or sleeping bag.

The spokesman's Facebook page later posted a brief video that showed more debris, including what appeared to be a piece of blue carpet, seat belts, a shoe and what looked like a woman's white handbag. The short clip opened with aerial footage of an unidentified navy ship followed by a speed boat with five service members aboard heading toward floating debris.

Egyptian authorities said they believe terrorism is a more likely explanation than equipment failure, and some aviation experts have said the erratic flight suggests a bomb blast or a struggle in the cockpit. But so far no hard evidence has emerged.

No militant group has claimed to have brought down the aircraft. That is a contrast to the downing of a Russian jet in October over Egypt's Sinai Peninsula that killed all 224 on board. In that case, the Islamic State group's branch in Sinai issued a claim of responsibility within hours. On Friday, IS issued a statement on clashes with the Egyptian military in Sinai, but said nothing about the plane crash.

Three European security officials said on Friday that the passenger manifest for Flight 804 contained no names on terrorism watch lists. The officials spoke on condition of anonymity because they were not authorized to discuss the investigation. The manifest was leaked online and has not been verified by the airline.

Further checks are being conducted on relatives of the passengers.

French aviation investigators have begun to check and question all baggage handlers, maintenance workers, gate agents and other ground crew members at Charles de Gaulle Airport who had a direct or indirect link to the plane before it took off, according to a French judicial official. The official was not authorized to discuss the investigation and spoke on condition of anonymity.

At the Paris airport, dozens of passengers, mostly Egyptians, queued for the afternoon EgyptAir flight to Cairo, with flight crew and pilots passing through the security post to have their luggage scanned. Checks were thorough but there were no overt signs of extra security in the waiting area as passengers boarded normally. However, a team of French security officials did enter the plane and walked through the aisles before take-off.

Whatever caused the aircraft to crash, the tragedy will most likely deepen Egypt's difficult predicament as it struggles to revive a battered economy and contain an increasingly resilient insurgency by Islamic militants.

In the five years since the country was first mired in turmoil caused by a popular uprising against longtime autocrat Hosni Mubarak, the lucrative tourism sector has been decimated, the value of the local currency has progressively fallen and domestic debt has mushroomed.

While the latest tragedy may not reflect directly on security at Egypt's airports, as the Russian jet crash did in October, the country's association with another air disaster will impact negatively on tourism and the flow of foreign investment.

In Paris, French Foreign Minister Jean-Marc Ayrault said Saturday that he and other officials — including representatives of Paris Aeroport, the French prosecutor, EgyptAir, and the Egyptian ambassador to Paris — had met with about 100 family members to express "our profound compassion" over the crash.

In a statement delivered to reporters following the meeting, he said: "All the hypotheses are being examined — none are being favored."