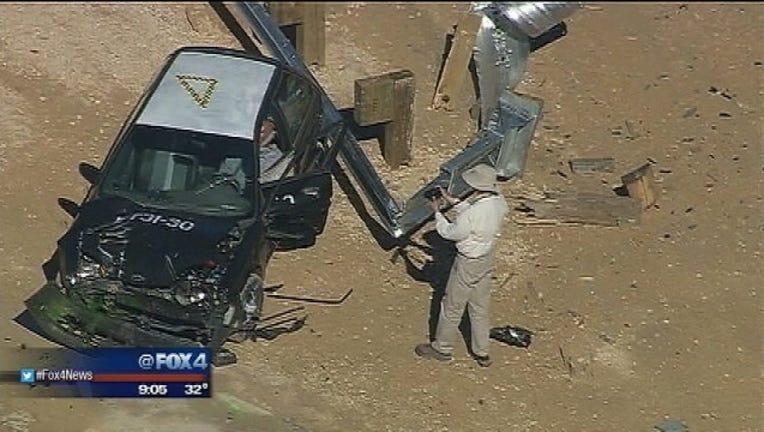 The Federal Highway Administration (FHWA) is giving a controversial guardrail system a passing grade in the first of eight crash tests. Those tests were ordered after an East Texas jury found Dallas-based Trinity Industries defrauded the government for failing to disclose design changes.

The government has not made an official comment about the last four tests. Those results will be out in a few weeks.  The FHWA has said if the system does not pass, it will revoke the acceptance of the ET-Plus guardrails on our highways.  And while Trinity is claiming victory, there are some speaking out about one test in particular, the eighth and final test.

The Trinity guardrail system is being blamed in lawsuits for deaths and serious injuries across Texas. Victims and families say the system is defective, claiming it locks up and can impale a vehicle.

But the FHWA says the first four tests conducted in December and January in San Antonio show the “ET-Plus end terminal at a height of 27-¾ inches meets the applicable crash test criteria,” and a third party hired by the government who reviewed the tests agrees the ET-Plus passed.

But it is an eighth test conducted on January 27 that is raising questions about the safety of the product.

“No matter how you measure it, this last test is a failure,” Dr. Dean Sicking of the University of Alabama said.  Sicking is a guardrail expert. He has been critical of the ET-Plus and worked as a paid consultant for the whistleblower in the federal case.

In an aerial video taken by a San Antonio television station, you can see the test car, a Geo Metro, spins out.  The guardrail hits the driver's side door and it collapses inward.  There is also damage to the front end.

After the eighth test, the FHWA said there was no spearing or intrusion of the end terminal into the interior of the test vehicle.  The government will have to analyze the data before assessing whether it passed.  Others disagree about what this tests shows.

Dr. Brian Coon is calling the eighth test a “clear failure.”  Coon is a guardrail expert who testified for the whistleblower. He has filed a declaration in federal court stating, from his review “the guardrail buckled and began violently penetrating the occupant compartment.” He says the test criteria states, “intrusions into the occupant compartment that could cause serious injuries should not be permitted.”

Coon also states in his declaration, tests involving a flared ET that were introduced at trial, and that eighth test are both similar to failures occurring on the nation's roadways. Trinity claims those flared tests were an experiment on a completely different system.

“Nobody wants to be in that vehicle if they hit that terminal,” whistleblower Josh Harman said.

Harman has raised questions about the tests from the beginning. He believes they should have been open to the public and outside experts should have been able to measure all of the devices tested.

Trinity has stopped shipping the ET-Plus.  Texas is one of at least 30 states which have stopped using it on new installations. Harman believes that's not enough. He wants them replaced.

“If they pass that test, then any terminal can be on the roadway,” Harman said.

A Trinity spokesman responded to the eighth test saying, “Guardrail experts know full well you cannot base any crash test outcome solely on visual representation. These tests are data driven based on NCHRP report 350 criteria. Until all the data is completely analyzed, it would not be appropriate to comment or speculate on individual aspects of any test. When the test data is complete, it will be reviewed and released by the Federal Highway Administration."

On Friday February 13, a Trinity spokesman sent out a statement saying, it is pure speculation to declare a test a failed or passed based on photos.  He points to two non-Trinity products where vehicles were damaged but they passed based on test data.

Texas A & M's Transportation Institute or TTI, which designed the technology, is saying the first four tests show the system is safe and effective.