Thousands of North Texas homes have burst pipes and extensive water damage. Some homeowners who have insurance are being forced to leave their homes and delay repairs because claims adjusters are overwhelmed.

FORT WORTH, Texas - Many people have been pushed into desperate circumstances because of the winter storm.

Some homeowners who have insurance are being forced to leave their homes and delay repairs because claims adjusters are overwhelmed.

It’s a familiar story all across the state: No power, frozen pipes, thawing pipes and flooded houses. 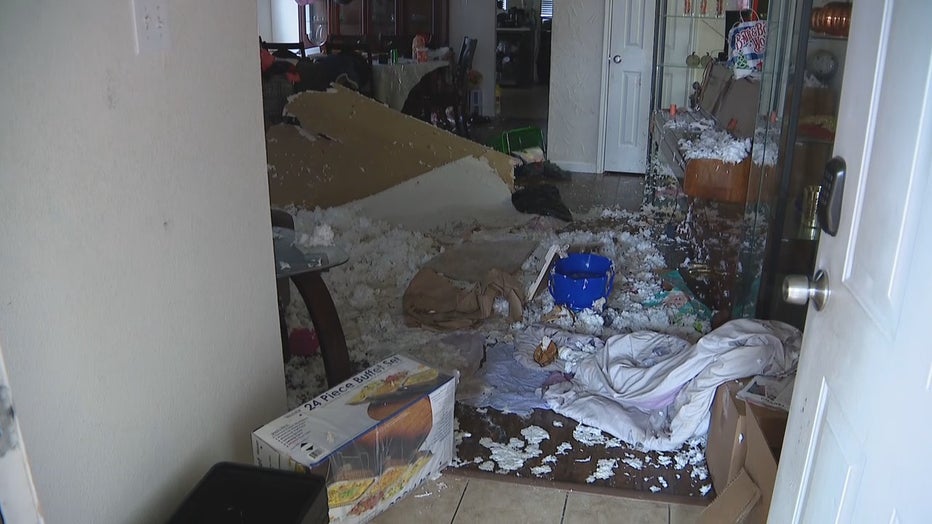 Matriarch Ruby Swasey and her whole family had to quickly evacuate their home last Wednesday morning after piping burst over the living room and garage.

Her son-in-law, James Rasnick, rushed to get the children outside.

73-year-old Swasey bought her Arlington home two years ago to bring her four children and 10 grandchildren under one roof.

"I said now I have a place where we could all be together," she said.

Now, the family is split up. Some are staying with friends and others are bouncing from hotel to hotel.

"Things happen in life and everybody needs somebody," she said.

Swasey called her insurance company immediately, but they can’t come for another week.

Camille Garcia with the Insurance Council of Texas says plumbers and contractors are going to be booked for weeks, which could mean a long wait for families like Swasey’s.

"This is going to be one of the largest claim events that we’ve had in Texas history," Garcia said. "I think the recovery period is going be the greatest stretch."

Swasey says insurance will cover up to $10,000 in piping repairs, but she’s not sure how much they’ll reimburse for living expenses.

Swasey’s daughter, Nazira Erales, is unsure of when they can even start the repairs.

"At the rate that we are going right now, it looks like months," Erales said.

But they’re trying to stay positive and grateful they all still have each other.

"First thing that went through my mind was thank you Jesus because my children were not in the living room," Erales said.