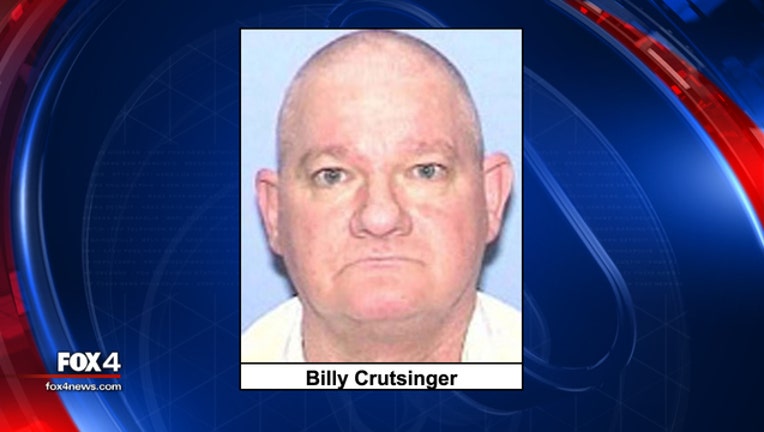 HUNTSVILLE, Texas (AP) - A Texas death row inmate is set to be executed Wednesday for fatally stabbing an 89-year-old woman and her daughter more than 16 years ago in their Fort Worth home.

Billy Jack Crutsinger, 64, is scheduled to receive a lethal injection Wednesday evening for the 2003 killings of Pearl Magouirk and her 71-year-old daughter Patricia Syren. Authorities say Crutsinger killed the women then stole Syren's car and credit card. He was arrested three days later at a bar in Galveston, more than 300 miles (480 kilometers) away.

Crutsinger's appellate attorney has asked the U.S. Supreme Court to stop his execution, alleging his previous lawyer had a long history of incompetence in death penalty cases.

"The jury heard nothing from the defense that provided an explanation about the disease of alcoholism in relation to the offense conduct," including "a history of domestic violence and abuse, and repeated losses of significant friends and relatives," Lydia Brandt, Crutsinger's current attorney, wrote in her one of her Supreme Court petitions.

At trial, prosecutor Michele Hartmann told jurors that Crutsinger's actions had nothing to do with alcohol but were the result of "evil."

Brandt also argued that lower courts have wrongly denied Crutsinger funding to investigate competency and mental health claims that were not sufficiently reviewed by prior attorneys.

Lower appeals courts and the Texas Board of Pardons and Paroles have declined to stop the execution. If it happens, Crutsinger would be the 14th inmate put to death this year in the U.S. and the fifth in Texas.

Friends and family described Magouirk, known as "R.D.," as an avid gardener. Syren volunteered as a receptionist at her church. Both women were retired and lived together.

Crutsinger had been "spiraling downward much of his adult life." He had three failed marriages and a propensity for violence when he drank, according to a report by a forensic psychologist hired by his trial attorneys.

In the months before the slayings, Crutsinger became homeless and increasingly desperate after his wife kicked him out and his mother, who had enabled his behavior, stopped helping him, according to the report.

Crutsinger offered to do some work for Magouirk and Syren in their home, but when he realized they didn't have enough work to give him much financial relief, he flew into an alcoholic rage, the report said.

"All of his anger at being left to fend for himself and of having his safety net taken from him was then brought to bear on the victims," according to the report.

DNA evidence tied Crutsinger to the killings and he confessed to the crime.

In an email, Brandt described Crutsinger's previous appellate lawyer, Richard Alley, as a "great word processor" who cut and pasted "worthless" legal arguments from other cases and who was removed from another death row inmate's case and had been suspended from practicing in federal court.

Brandt alleges Alley performed similar shoddy work in at least six other death penalty cases. Four of those inmates have been executed. An attorney for former death row inmate Bobby Woods also alleged incompetent work by Alley before Woods was executed in 2009.

In 2006, the Texas Court of Criminal Appeals removed Alley from its list of lawyers eligible to represent death row inmates in their appeals.

"I do the best I possibly can on all these cases," Alley told the Austin American-Statesman in a 2006 story that was part of a series that looked at bad work by court-appointed attorneys in death penalty appeals.

The Texas Attorney General's Office called Crutsinger's allegations against Alley "speculative" because he had not identified any claim that Alley should have raised but did not. The attorney general's office also said Crutsinger's case has received an "extensive review" during his appeals process.