Natalie Trout, 38, used tanning beds for roughly 13 years and would not use sunscreen while spending time outside during the summer months.

INDIANA - An Indiana woman is warning others of the dangers of tanning beds after she developed melanoma, which, following its removal, left a massive hole in her cheek.

Natalie Trout, 38, told MDWFeatures she used tanning beds for roughly 13 years and would not use sunscreen while spending time outside during the summer months.

“Depending on the time of year, I would use sunbeds at least twice a week in my twenties. During the summer I wouldn’t use them, but I did lay out by the pool a lot, where I would get burnt or tanned,” she said. “In the winter when it was cold out, I would typically use sunbeds a few times a week. It was something I did with my roommates, and we loved it.”

Trout said she felt being tanned made her “look better and [look] thinner.”

“I never thought it would happen to me. But it did."

“Everyone around me was tanning, and I was insecure enough at the time to feel like I needed to use sunbeds as well,” she added. “Usually I would burn, but that didn’t matter. To me, it was better to be burnt than pale. Pale was almost unacceptable at the time.”

In 2015, Trout noticed a “dry, red spot” on her right cheek. A dermatologist later told her the spot was pre-cancerous and should be removed, suggesting Trout undergo cryotherapy, or a procedure that uses liquid nitrogen to “freeze and destroy abnormal cells,” per Cancer.Net.

But the spot returned roughly a year later, Trout said. She was subsequently diagnosed with melanoma, a type of skin cancer.

“When I heard the news, at first I was in disbelief," she said. "It could have been a lot worse, so I was glad it would hopefully be fixed with surgery. But it also wasn’t a best-case scenario, as there is a stage zero melanoma. I was a stage one."

“I remember driving to my parents’ house, and I hadn’t even cried yet. Then, when I saw my parents, I broke down,” Trout continued. “I had skin cancer, and not just any skin cancer, but the deadliest kind.”

Though successful, surgery to remove the cancerous spot left Trout with a sizable hole in her cheek, which many people mistook for a dog bite, she said. 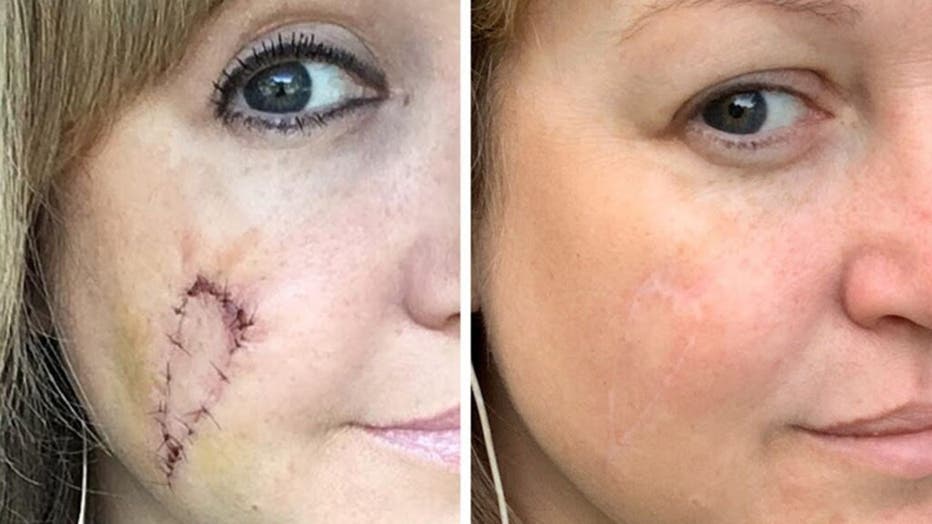 Natalie pictured before and after her scarring healed. (MDWFEATURES / NATALIE TROUT)

Following the procedure, Trout said she met with an oncologist, though she did not require further treatment. Rather, she said, she used the appointment as an opportunity to learn more about melanoma.

“She taught me a lot about melanoma, and I learned how to check my lymph nodes for any irregularities, as this is where melanoma will spread to, if not detected otherwise,” she said. “My oncologist said it was likely a combination of sunbeds and natural sunlight that led to melanoma; I simply didn’t take good care of my skin.”

“It never occurred to me how much harm I was doing to myself. Even when people would warn me about skin cancer, I would think to myself, ‘It won’t happen to me.’”

Skin cells are damaged when exposed to ultraviolet (UV) light, which is present in both the sun and tanning beds. In fact, according to the Skin Cancer Foundation, those who use tanning beds before the age of 35 “increase their risk for melanoma by 75 percent.”

Following her health scare, Trout said she is now very diligent when it comes to taking care of her skin and noted she sees her dermatologist every six months to ensure she has not developed melanoma anywhere else on her body.

“Skincare is very important to me now. I wear SPF 30 on my face every single day, and there is sun protection in my makeup," she said. "If I’m going to the pool or the beach, I always wear at least SPF 50 all over my body, and usually a large hat to shade my face and shoulders. I simply can’t take the risk of getting burnt."

“I never thought it would happen to me. But it did. Skin cancer doesn’t discriminate,” she added. “Being tanned is not more important than being healthy. Take care of your skin. And if you see any suspicious spots, don’t wait to see a dermatologist. Even if it turns out to be nothing, at least you know.”

Trout’s story comes after a “diehard” tanner was left with a hole in her nose and staples in her face after she, too, developed skin cancer likely linked to her tanning habits.