Health and education leaders are trying to determine how to reopen while still abiding by COVID-19 safety guidelines.

NASHVILLE, Tenn. (AP) - For generations, school has been an opportunity for American children to learn and make friends. For many parents today, though, it's something that's elemental in a very different way: a safe place that cares for their children while they are at work — or a necessity for them to be able to work at all.

The outbreak of the coronavirus this year, and the upending of society it has produced, have caused these views of school in American life to collide in ways that have thrown millions of parental lives into disarray. Now, President Donald Trump is demanding that schools reopen in the fall. But with the virus resurging widely, many working parents see no good options.

“I don’t have the benefit of a husband or other family members to care for my son,” says Michelle Brinson, who works full time for a Nashville nonprofit while raising her 11-year-old alone.

At 50, and with underlying health conditions, Brinson says she is “terrified” of contracting COVID-19. She is worried that if her son goes back to school, he could bring the virus home to her. “If I’m dead or on a ventilator," she says, "what good am I to him?”

This isn’t the first time American schools have closed — or talked about it — because of an epidemic. It happened in 1918 with the so-called Spanish Flu and in the 1930s and 1950s with polio outbreaks.

But the nature of school has changed fundamentally since the 1950s, education historian Jonathan Zimmerman says. School used to teach basic skills and citizenship, but extensive schooling wasn’t necessary for many jobs.

“The whole structure of the economy changed postwar, and formal education became a prerequisite for self-sufficiency in a way it never had before,” he said. Schools have also become de facto social service agencies, providing necessities like free meals and mental health services.

That’s where the conflict lies. To ask a parent — particularly one trying to parent alone — to work full time while supervising education and daytime meals is a formula for stress and unreasonable expectations.

RELATED: Masks for kids? Schools confront the politics of reopening

Rebecca Witte can attest to that. For Witte, the experience of working from home while also helping her two children wrap up kindergarten and second-grade from home is not one she wants to repeat.

As a spokeswoman for the Kansas Department of Corrections during a coronavirus outbreak that infected more than 900 inmates, she recalls her kids coming in screaming one day while she was being interviewed. Her husband, a school principal, shared the schooling responsibilities but was also busy helping teachers at his school shift to virtual learning.

“Trying to work, it was hard," Witte said. “It will be interesting to see what the plan is in the fall. ... I am hopeful they won’t be home full time with me trying to teach and work.”

Before the virus, Brinson says, she “went into work every single day, and my son went to school and he had aftercare with the YMCA." Brinson was totally unprepared when schools closed in March. She ended up taking several days off until she received permission to work from home. Now her employer is pressuring her to come back in.

Brinson acknowledges that online schooling was a disaster and they eventually gave up. A visit to an attorney’s office to draw up a will marks one of the only times she has left home since mid-March. 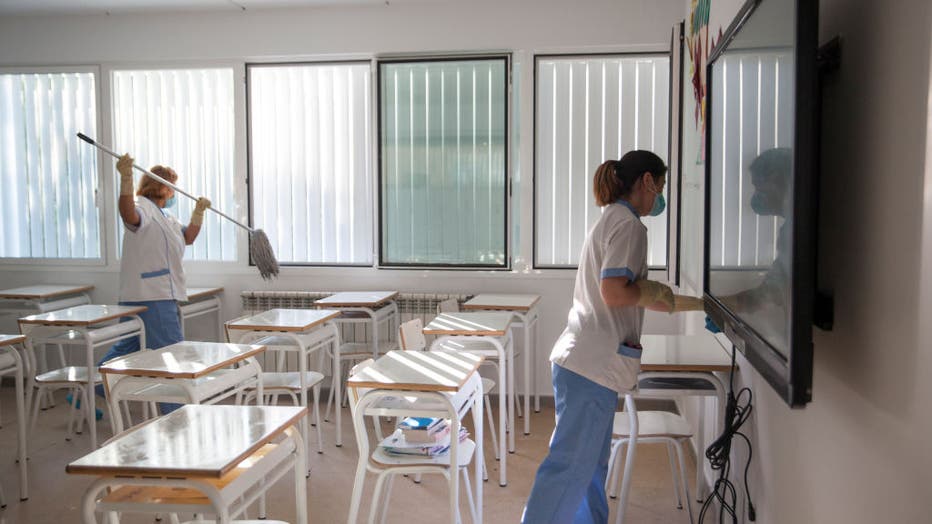 Giovana Torrico and Daniela Burgui clean one of the classrooms at the Liceo Europeo school in preparation for the re-opening of activities on May 22, 2020, in Alcobendas, Madrid, Spain. (Photo by Miguel Pereira/Getty Images)

In many ways, Brinson and Witte are lucky. Their jobs offer some flexibility.

Taryn Walker, a single mother, has been relying on her two teenagers to care for her 5-year-old while she works as an administrative assistant. Her job never shut down, and she can’t work from home.

Her youngest daughter didn’t go outside for three months as the virus tore through their New York City neighborhood. She knows the girl misses her friends; her birthday party got canceled, too. The situation has also strained Walker financially as her grocery bill rises. "Because they are home all day, I’m paying two or three times the amount I did before,” she says.

But Walker also doesn’t feel safe sending the kids back to school. “I feel like I have been managing to work through this entire pandemic by being very careful,” she says.

Elizabeth Ananat, an economics professor at Barnard College and a former Obama economic adviser, has been surveying a group of 1,000 hourly service workers since fall. “What we’ve found," she says, “is that working families with young children ... are particularly harmed by this crisis.”

Parents need to work to put food on the table but also need to care for their children. And they can't afford to get sick. Those strains existed before, but the lack of school and other child care programs and the deadly nature of the virus are compounding the pressures.

“The whole thing is obviously a mess. It's a disaster,” she says.

Federal stimulus money for businesses and the unemployed has helped, although not everyone who was eligible was able to get it, Ananat says. But now much of that is running out.

“Employers haven’t gotten more money. They’re pressuring people to come back to work. But school systems don’t have a plan to make that happen," Ananat says. With the virus on the upswing, “even if schools do open, it’s not clear how many will feel safe sending their children back,” she says.

In Florida and Texas, both states with spiking case numbers, officials are requiring school districts to offer in-person schooling to those who want it. Texas’ guidance for schools includes a recommendation to space desks 6 feet (2 meters) apart and, if that's impossible, “plan for more frequent hand washing and/or hand sanitizing” and “consider whether increased airflow from the outdoors is possible.”

That's not good enough for Vicky Li Yip, whose children are 5, 8 and 10. She works from her Houston home, and says online schooling has been exhausting, even with her husband helping out. But with her city becoming a national hot spot, she has been considering what it would mean for her children to face possible exposure every day.

“It brings tears to my eyes just to say it,” Li Yip said. “To think that I would have to tell the kids, when they see their grandparents: ‘You can’t hug them.’”