In Mexico, Vice President Harris defends against criticism over not visiting southern border

The vice president says she is on a fact-finding mission to figure out the root causes that are driving thousands of migrants to the U.S-Mexico border. She defended her decision not to visit the border, which Republicans and many Democrats want her to do.

MEXICO CITY - Vice President Kamala Harris brushed off questions about her decision not to go to the U.S.-Mexico border as part of her work to address the spike in migration, declaring Tuesday that while it was "legitimate" to be concerned about the situation at the border, it wouldn’t be addressed with a simple visit.

As she closed out a two-day visit to Guatemala and Mexico aimed at strengthening diplomatic ties to help deal with migration to the U.S., Harris declared: "When I’m in Guatemala dealing with root causes, I think we should have a conversation about what’s going on in Guatemala."

Speaking to reporters traveling with her in Mexico, Harris was asked about the prospect that her decision not to visit the border may be overshadowing her focus on the very issues prompting migrants to flee their homes for the U.S. 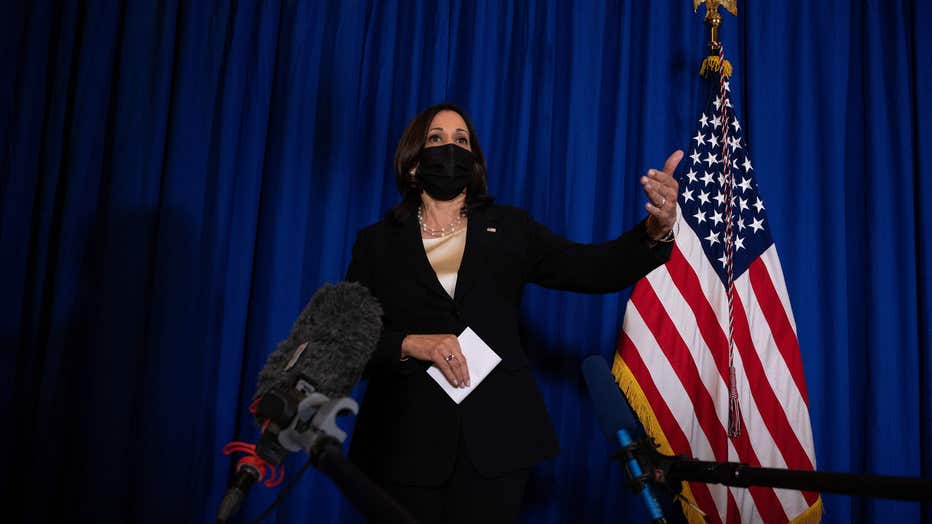 US Vice President Kamala Harris takes questions from the press after her bilateral meeting with Mexican President Andrés Manuel López Obrador in Mexico City, on June 8, 2021. - The trip is part of the Biden administration's promise to implement a mor

She added: "It would be very easy to say, we’ll travel to one place and therefore it’s solved. I don’t think anybody thinks that that would be the solution."

Pressed on why she wouldn’t simply visit if her goal is to address migration as a whole, Harris noted that she had visited previously, as a senator from California, and may again.

Harris’ decision not to go to the border as part of her mission on migration threatened to overshadow her diplomacy as she closed out a two-day trip to Guatemala and Mexico focused on stemming the flow of people into the U.S. Her work thus far has focused on strengthening diplomatic relations, and she met with both Guatemala’s and Mexico’s presidents on her trip to discuss economic investments and increased enforcement against trafficking, smuggling and corruption.

The increase in migration at the border has become one of the major challenges confronting Biden in the early months of his first term, with Republicans seizing on an issue they see as politically advantageous. Polls suggest Americans are less favorable toward Biden’s approach to immigration than they are toward his policies on the economy and the COVID-19 pandemic.

They’ve tried to make Harris the face of that immigration policy, charging she and Biden are ignoring the issue because both have yet to visit the southern border. Harris told reporters she was focused on "tangible" results "as opposed to grand gestures."

Harris and her aides have sought to make clear that her mission is narrowly focused on finding diplomatic solutions to the problem at the border. But during her trip this week she and the Biden administration were dogged by questions on the issue. During an NBC interview, she dismissed a question on why she hadn’t yet visited by responding, "and I haven’t been to Europe. And I mean, I don’t understand the point that you’re making — I’m not discounting the importance of the border."

After Republicans seized on her comments to portray Harris as out of touch with the issue, White House press secretary Jen Psaki was forced to defend the decision as well.

But it drew headlines even as Harris called attention to what she described as a productive meeting with Mexican President Andrés Manuel López Obrador. After the meeting, the administration announced a range of agreements brokered between the two governments, including a $130 million commitment over the next three years from the U.S. to support labor reforms in Mexico and loans to bolster southern Mexico’s economy.

The administration said the meeting produced an agreement to have an economic dialogue in September on trade, telecommunications and supply chains. And the two countries will also partner on human trafficking and economic programs addressing why people leave El Salvador, Guatemala and Honduras for the U.S.

Harris told López Obrador at the start of their meeting that the two nations are "embarking on a new era" and emphasized the longstanding "interdependence and interconnection" of the two nations.

Harris also met female entrepreneurs and planned to hold a roundtable with labor leaders in Mexico before heading back to Washington on Tuesday night.

The visit to Mexico capped Harris' first foreign trip as vice president, a brief foray that

But some Democrats criticized the vice president Monday when she delivered a direct message to those considering leaving their homes and making the often dangerous trek to the U.S. border: "Do not come."

Her comments echoed those made by past U.S. officials as they've tried to dissuade migrants from seeking to cross the border, as the U.S. faces unprecedented numbers of attempted border crossings. Democratic Rep. Alexandria Ocasio-Cortez of New York called her comments "disappointing" and noted that it is legal to seek asylum.

Harris declined to respond directly to the criticism when reporters asked, saying only: "I’m really clear: we have to deal with the root causes and that is my hope. Period."

But the criticism from both Republicans and Democrats underscored the politically fraught nature of the assignment, and the difficulty Harris faces in finding success with an intractable challenge that's only grown in recent months.

"There are many South Texas Democrats who are very frustrated with the Biden Administration and with VP Harris for not seemingly acknowledging the urgency of the situation they face," he said. "The Biden-Harris Administration had been very reticent in framing the border situation as a crisis. I think there's a real effort on Harris' side to treat the problem seriously but not feeding into her opponent’s hands as if it is an urgent situation. So there's kind of a fine line to walk for her."

Illegal border crossings have increased steadily since April 2020, after Trump introduced pandemic-related powers to deny migrants the opportunity to seek asylum, but further accelerated under Biden. The new president quickly scrapped many of Trump’s hardline border policies — most notably the program that made asylum-seekers wait in Mexico, often in dangerous conditions, for court dates in U.S. immigration court.

U.S. border authorities encountered nearly 19,000 unaccompanied children in March, the highest on record. Overall, more than 170,000 encounters were reported on the border in April, the highest level in more than 20 years.

The numbers aren’t directly comparable because getting stopped under pandemic-related authorities carries no legal consequences, resulting in many repeat crossings.