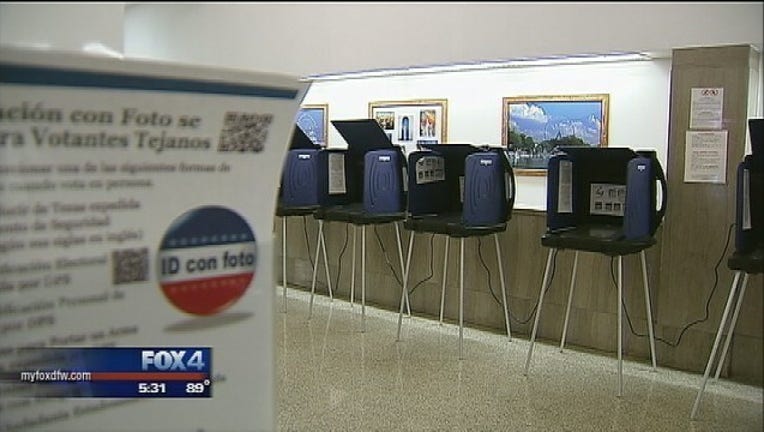 AUSTIN, Texas (AP) — Texas is back in federal court yet again defending one of the nation's strictest voter ID laws — this time against charges that the state is violating its own recent agreement to soften the rules ahead of the November election.

Last month, Texas approved letting residents who couldn't meet the requirement of its 2011 voter ID law cast ballots in the presidential election after the 5th U.S. Circuit Court of Appels found that the law discriminated against poor and minority voters.

But since that July ruling, the U.S. Justice Department has accused Texas of reneging on the deal. U.S. District Judge Nelva Gonzales Ramos in Corpus Christi is hearing arguments on those complaints Monday evening.

Here are answers to some key questions in the case:

A: It largely comes down to a few key phrases.

Texas has agreed to let residents with IDs approved under the 2011 law, or those who "have not obtained" or "cannot obtain" qualifying identification, vote in the November presidential election. The state has used such terminology on official websites and in election training materials.

But the Justice Department says the original agreement called for extending voting to all Texans facing a "reasonable" impediment to obtaining approved photo identification. It says Texas' phrasing is too restrictive and will unnecessarily narrow the number of eligible voters, including Texans who had previously gotten proper IDs but lost them or had them stolen.

Federal government attorneys warned in court filings that Texas' language could cause confusion and delays during the election on Nov. 8 and want it corrected in state materials.

Texas Attorney General Ken Paxton's office counters that printing new materials will be expensive and time-consuming, and is unnecessary since the modified rules aren't restrictive.

Q: How did we get this far?

A: The New Orleans-based 5th Circuit ruled that Texas' law had a "discriminatory effect" on poor and minority Texans. That forced Texas to loosen its law for November's election, and Ramos on Aug. 10 approved a softer version both sides worked to hammer out.

The deal says voters can now cast a counted ballot by signing an affidavit and presenting a paycheck, bank statement, utility bill or government document that includes their name.

It also mandates that Texas spend at least $2.5 million on voter outreach before November. The state's deadline to register for the presidential election is Oct. 11.

Q: Why was the law considered discriminatory?

Elections experts have testified that Hispanics were twice as likely and blacks three times more likely than whites to lack an acceptable ID under the law. They also said lower-income Texas residents were more likely to lack underlying documents to obtain a free state voting ID.

Opponents say 600,000-plus registered voters lacked one of seven suitable IDs under the law.

Paxton's office counters that the law is necessary to prevent voter fraud — though such cases are rare. Meanwhile, Texas was allowed to fully enforce the law even amid ongoing legal battles during the last three election cycles, and there were few reports of voter disruption.

Q: Isn't this an issue elsewhere?

A: More than 30 states have some form of voter ID law. Of those, nine have strict limitations on what forms of identification are valid.

But Texas spells out just seven forms of acceptable voter identification. A concealed handgun license is allowed, for instance, while college IDs aren't.

A separate federal appeals court has blocked North Carolina's law limiting to six the number of approved IDs for voters, but the law there also scrapped same-day registration and shortened early voting periods.

Wisconsin saw its voter ID law recently blocked in federal court too, but that state will let people who haven't been able to obtain approved IDs vote in the presidential election if they sign an affidavit explaining why they couldn't.

A: It's unclear when Ramos will rule. But the fight over a relaxed version of Texas' voter ID law for November won't be the end of the case, no matter what.

Federal courts will eventually decide whether Texas drafted its law in a way that was deliberately discriminatory, or simply had that effect. Paxton, meanwhile, has vowed to keep appealing and defend the original law before the U.S. Supreme Court.