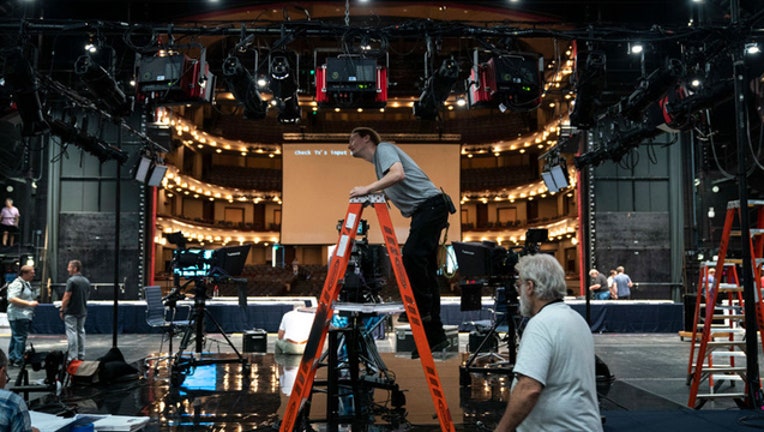 NEW YORK (AP) - Don't envy NBC News executive Rashida Jones, who is behind this week's inaugural Democratic presidential debate and will have to juggle 20 candidates, five news personalities and, it's likely, one tweeting president.

While the event is obviously important for politicians getting their first wide exposure as potential presidents, the stakes are high for NBC News, too.

"Primary debates are a big prestige event for every network," said Mark Lukasiewicz, dean of Hofstra University's school of communication, who had Jones' job four years ago. "It's why every network tries to get one and tries to get as many as they can. It's a branding opportunity."

The debate will unfold over four hours Wednesday and Thursday, 10 candidates each night , and will air on NBC, MSNBC and Telemundo. Lester Holt, Savannah Guthrie, Jose Diaz-Balart, Rachel Maddow and Chuck Todd will be the NBC News personalities onstage in Miami.

NBC has been skittish about revealing too much in advance. The network won't talk about topics on the agenda - that's typical - and until Tuesday kept under wraps details about how it would run. With less than 48 hours' notice, NBC announced the candidates would have 60 seconds to answer questions and 30 seconds for follow-ups. The candidates will be allowed closing statements but no openers.

The goal was to focus attention where it should be, said Jones, NBC News' senior vice president for specials.

"The show is not about the moderators," she said. "It's not about NBC. We have the responsibility of being the conduit for the audience, but the focus is about the 10 people on the stage."

It's revealing that Jones frequently uses the word "show" in reference to the production. With so many candidates, debate may be a misnomer.

NBC's decision to include five of its own people also crowds the stage. They won't be on at the same time: The teams of Guthrie and Diaz-Balart, and Todd and Maddow, will moderate an hour each night, with Holt and Guthrie a constant presence. Some debate experts wonder if this will hurt the event's flow and cost opportunities for conversational follow-ups.

Jones said the personalities represent "our starting lineup" and have considerable experience on live television and in working together.

"The beauty of having so many people on the set is that there may be something that one person catches, but the others didn't," she said.

President Donald Trump's social media presence is a unique challenge. Does NBC ignore what the president is saying or make it a part of the debate? If so, does that risk the president hijacking a debate of people who want his job?

It's hard to commit to anything in advance, but Jones said NBC's concentration will be on the candidates onstage and the issues. "Beyond that, it has to rise to a certain level," she said.

One goal for NBC is to match the 24 million viewers that Fox News Channel had for the first GOP primary debate in 2016. That may be tough, since Trump's first debate appearance motivated curious viewers.

NBC will have an offstage timekeeper trying to ensure fairness in how each candidate is treated. It's a walk on a tightrope. The entire event is, frankly; one mistake can swivel unwanted attention to the network.

NBC knows how that works. Matt Lauer was roasted for how he conducted back-to-back live interviews of Trump and Hillary Clinton at a 2016 forum on the USS Intrepid, both for not pressing Trump about inconsistencies on his Iraq War positions and for the amount of attention paid to Clinton's email controversy.

"Trump should have reported (Lauer's) performance as an in-kind contribution," Clinton wrote in her book "What Happened."

A CNBC-sponsored Republican primary debate in late 2015 was generally seen as disastrous, in part because Trump bulldozed past co-moderator Rebecca Quick when she couldn't quickly cite the source of a statement that he denied saying (the quote came from a Trump policy paper).

Holt, however, received some praise for a steady performance in a Trump-Clinton debate.

"There are so many eyes on you and so many people with agendas," said David Bohrman, a news consultant who organized 10 debates while at CNN.

Through rehearsals and endless meetings, Jones and her staff are trying to anticipate what it can while remaining nimble enough to react to the unexpected. Like with baseball umpires, it will probably be bad news if people are talking the mornings after about NBC and not the candidates.

"I like doing something the way it's never been done before," she said. "I'll take a two-night unpredictable event over doing it the way we've always done it."