A video featuring this legal team features a montage of Maldonado-Passage with tigers before his arrest as well as shots of a giant tour bus with lettering on the side that reads, “PRESIDENT TRUMP Please Pardon JOE EXOTIC.”

LOS ANGELES - Joseph Maldonado-Passage, also known as “Joe Exotic,”a former zookeeper who was sentenced to 22 years in prison in a murder-for-hire plot and the focus of the wildly popular Netflix documentary “Tiger King,” has reportedly rallied together a legal team “the size of Texas” that is asking President Donald Trump for a pardon.

A video featuring this legal team features a montage of Maldonado-Passage with tigers before his arrest as well as shots of a giant tour bus with lettering on the side that reads, “PRESIDENT TRUMP Please Pardon JOE EXOTIC.”

Maldonado-Passage, has maintained his innocence ever since a jury last April convicted him for trying to arrange the killing of Carole Baskin, a Florida animal sanctuary founder who criticized his treatment of animals. Baskin wasn't harmed.

Francisco Hernandez, lead counsel for the Joe Exotic legal team, goes on to explain in the video that “Joe Exotic has a distinguished Fort-Worth connection and a massive new support team for his legal and business endeavors.”

According to the video, Bedford, Texas resident and private investigator Eric Love has been chosen as Maldonado-Passage’s executive manager. 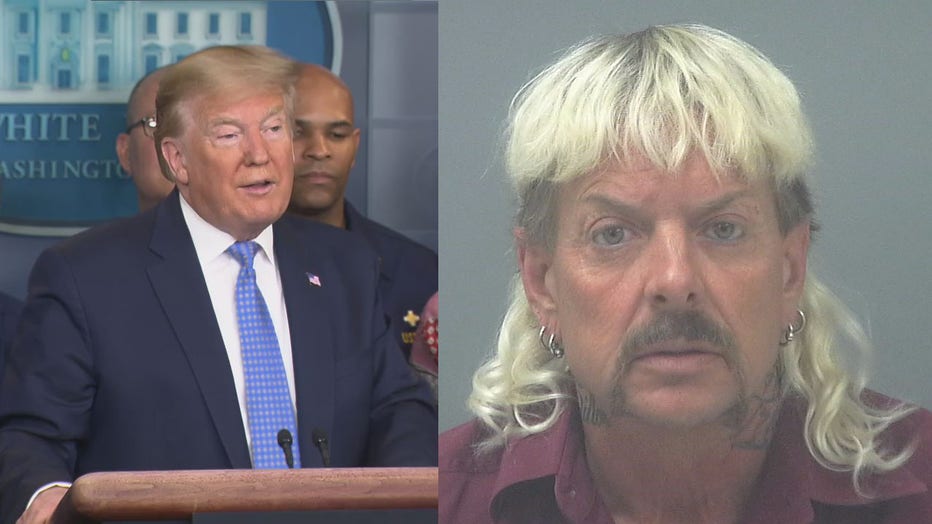 Shots of the legal team can be seen exiting a helicopter with the tour bus in the background as Hernandez goes on to express how the “Tiger King” has been wrongly convicted.

“A team the size of Texas has been assembled to handle the case of Joe Exotic,” Hernandez adds.

Love, a former law enforcement officer, says an army of attorneys has been built in order to prove Maldonado-Passage’s innocence, calling the conviction a “monumental injustice.”

A pair of YouTubers got Carole Baskin to do an interview by using audio clips from Jimmy Fallon interviews.

According to Love, the legal team will request that the president pardon Maldonado-Passage, contending that he was “led down a path by swindlers.”

In March, Maldonado-Passage filed a federal lawsuit against the U.S. Fish and Wildlife Service, the U.S. Department of the Interior, and the assistant U.S. attorney who prosecuted him and several witnesses. He’s seeking nearly $94 million in damages, claiming that he was convicted based on false and perjured testimony.

A federal judge decided to recommend dismissing his lawsuit and provided an April 28 deadline for objection filing.

On Thursday, U.S. District Judge Scott Palk extended that deadline to May 28 after Maldonado-Passage provided a handwritten letter requesting at least 30 days to respond, The Oklahoman reported Friday.

In the letter, Maldonado-Passage writes that he’s being isolated at the Federal Medical Center in Fort Worth, Texas, with “no access to a computer, phone, email or library.”