Vice President Kamala Harris visited Howard University, her alma mater, on July 8 where she spoke about the importance of protecting voting rights amid a Republican push to enact more restrictive voting laws.

WASHINGTON - From the halls of her alma mater at Howard University, Vice President Kamala Harris announced Thursday Democrats would be expanding their "I Will Vote" campaign with a donation of $25 million.

"This campaign is grounded in the firm belief that everyone’s vote matters. That your vote matters," Harris said. "And we saw this in 2020 when more Americans turned out to vote than ever before in the middle of a pandemic."

Democrats have been trying to strengthen the Voting Rights Act ever since Shelby V. Holder gutted key provisions from the law a decade ago. Now that many Republican state legislatures are passing restrictive voting laws based on former President Donald Trump’s debunked claims that widespread voter fraud cost him reelection, Democrats have a renewed focus on fighting voter suppression.

RELATED: For the People Act: Voting rights bill fails to advance in Senate

Many of the new laws target early voting, voting by mail and make it less convenient to wait in long voter lines, Harris said.

"This all is designed, I believe, to make it harder for you to vote, so that you don’t vote," Harris said.

Even though local, state and federal elections officials have repeatedly disproven Trump’s claims, fact-checking has done little to deter the former president.

Just Tuesday, Trump released a statement calling for election reform in "Swing States like Pennsylvania, Michigan, Georgia, Wisconsin, and Arizona where voters have lost confidence in their electoral process." Biden flipped all of those states en route to securing the presidency.

Democrats have stressed the new voting laws target minority voters, who are statistically more likely to vote in favor of the Democrats. 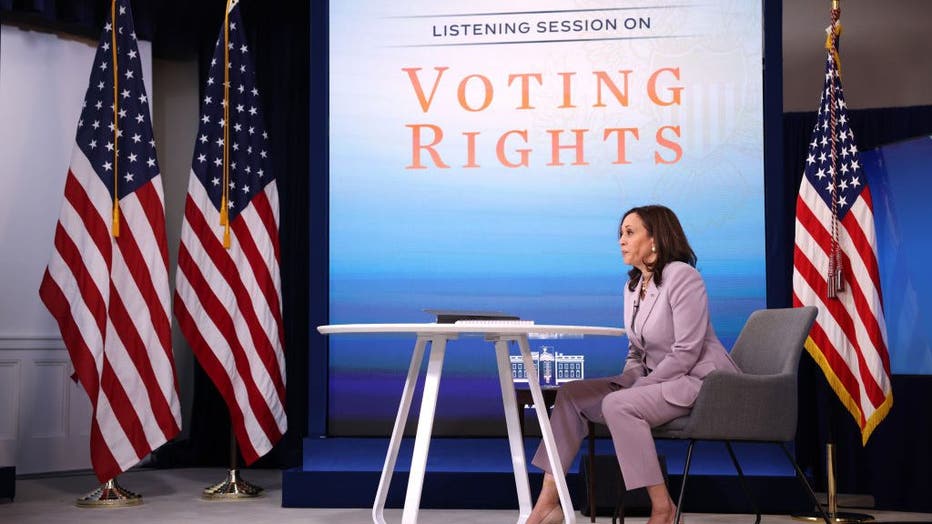 Vice President Kamala Harris delivers remarks before the start of a virtual listening session in the South Court Auditorium at the White House complex on June 23, 2021, in Washington, DC. (Photo by Anna Moneymaker/Getty Images)

In January, Rep. John P. Sarbanes, D-Md., introduced the For the People Act of 2021 (https://www.congress.gov/bill/117th-congress/house-bill/1), which is designed to address voter access, election integrity and security, campaign finance, and ethics for the three branches of government. If passed, many of the GOP’s new voting measures would be rendered moot.

It passed the House in March but died at the hands of a filibuster in the Senate last month. Abolishing the filibuster is an idea that’s become more popular among Democratic lawmakers.

Many have called it a relic of the Jim Crow era of politics, used primarily to further disenfranchise Black Americans. More progressive lawmakers believe abolishing the filibuster would make it easier to pass more liberal pieces of legislation.

Even so, the filibuster has a staunch defender in the Democratic ranks. Sen. Joe Manchin, D-W.Va., has voiced full-throated support for the filibuster.

Manchin, a moderate, has said the filibuster protects bipartisanship and guarantees debate in the Senate chamber.

Last month’s filibuster dealt a devastating blow to the legislative branch’s fight to secure voting rights, but the executive branch still has its eye on a solution.

Harris said the $25 million donations will be used to register, educate, turn out and protect voters, as well as assembling the largest voter protection team Democrats have ever had.

Not only did Harris encourage people to register to vote, she asked for people to make sure their friends and family are registered too.

"This is the fight of our nation’s lifetime, and we need your help," Harris stressed.

And Attorney General Merrick Garland has said the Department of Justice will aggressively enforce voting rights, prosecute threats against election officials, double the number of prosecutors devoted to the issue and closely examine how states conduct their elections, Reuters reported.