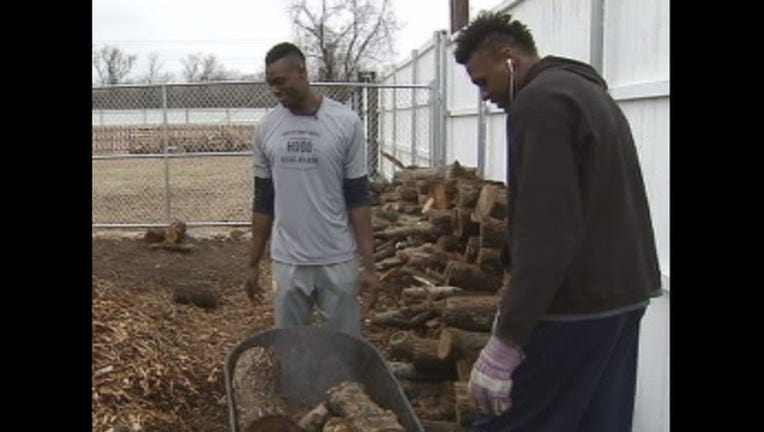 The team is led by a couple of twin towers from Haiti, talented young men who left their earthquake ravaged country for what looks like a bright future in Texas. Young men who recognize the opportunity they've been given and are eager to give back.

Prestonwood Christian Academy has become a powerhouse in its high school division, winning its fourth straight State Championship in 2015.

They are led by two near 7-footers from Haiti; leading scorer Schnider Herard and leading rebounder and shot blocker Djery Baptiste.

Both Djery and Schnider arrived in North Texas in the aftermath of a terrible earthquake that devastated their country five years ago. They now live together in McKinney with a sponsor family and play at Prestonwood.

"I tell people all the time, as good a basketball players as Djery and Schnider are they are better people," their coach Chris Lovell says.

Both young men harbor dreams of playing professional basketball, legitimate dreams says their coach. "I think they both have a chance to be really really good basketball players and play for a long time and we pray that god will continue to bless them and give them those opportunities."

Their potential as basketball players certainly played a role in getting them here - but each has the wisdom to see the opportunity as much greater than that.

"Education counts too. Like god first, education second and basketball third. That's pretty much how we see it," Schnider says.

Djery, a senior, has signed to play at Vanderbilt in the fall. "I would go to school in Haiti, maybe even possibly make it to college. I would still not get an opportunity to get a job because 80 percent of the population is not working," Djery explains. "It's just a god thing that I ended up going there. It's been changing my life. I had the opportunity. I had to make the best of it."

Djery spends a lot of time at Bonton Farm Works. "You know this is a joy for me to do, honestly. I mean I love helping."

Bonton Farm Works is a Christian Co-op effort that seeks to transform a low income neighborhood with living wage jobs and affordable food.

"I'm happy to do it with all my heart. I'm just blessed. Make me realize how much I have and the opportunity that I have here," Djery says.

"Coming in from Haiti and walking into Plano, Texas if you will. Things are a lot different here. So they've been given an opportunity of a lifetime to pursue their dreams and goals for the future," says coach Chris Lovell.

Djery has expressed a desire to one day return to Haiti and possibly become a diplomat.

Schnider hopes to stay here but maintain a home in Haiti. After his basketball career has run its course.