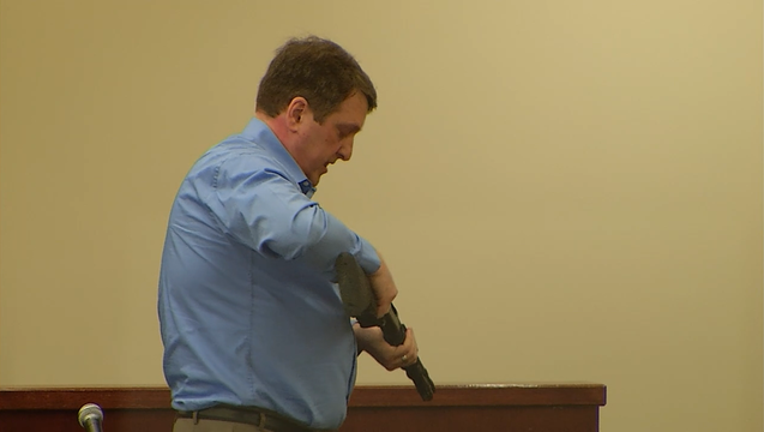 The state introduced testimony from a gun expert in the case of Fort Worth Police Officer Courtney Johnson on Thursday.

Johnson is on trial for aggravated assault by a public servant for shooting and wounding a man holding a BBQ fork with his shotgun.

Dash cam video shows Johnson confront Craigory Adams and then shoot Adams in the arm. Johnson told investigators he did not have his finger on the trigger when the shotgun went off.

Defense attorneys say the shooting was an accident and the case is an issue of a lack of training.

A gun expert showed the jury how he tested Johnson's Remington 870 shotgun. He testified he found no malfunction.

"The claim of a discharge without a trigger pull you've got to have release of the hammer gun not going to go off unless the hammer goes forward and hits the firing pin and starts the process,” said Derek Watkins, gun expert.

The state also brought testimony from a trainer with the Fort Worth weapons range.

Under cross examination by the defense, Officer Michael Moore told the jury it's possible for someone accidentally discharge a shotgun if they were startled or surprised.

Johnson was alone in June of when he responded to a call of a prowler with a knife. The knife turned out to be a BBQ fork. Adams was shot as he went down on one knee.

The defense is expected to begin its case next week.