Gov. Greg Abbott: Texas to provide PPE at no cost to schools

The governor held a briefing Tuesday morning in San Antonio to talk about the availability of PPE heading into the school year.

It’s not just coronavirus but also the seasonal flu that put a strain on supplies of masks and hand sanitizer.

Abbott said the state has distributed 59 million masks, 600,000 gallons of hand sanitizer and 24,000 thermometers to schools statewide with much more available.

The Texas National Guard, called up by the governor in March, has been part of distributing the materials into a statewide supply chain. President Trump has extended federal funding to keep the guard active through year’s end.

“Our goal is to get PPE out in the widest reaches of the state that we can get every school district, every hospital, every nursing home/assisted living facility, all fire and EMS first responder agencies,” Abbott said. 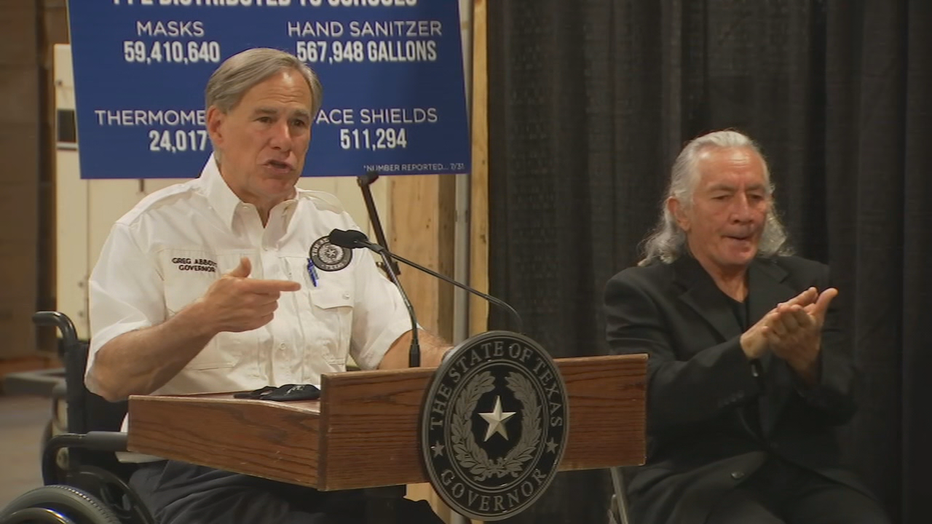 He also cautioned that schools will need to be prepared for disruptions if there are localized outbreaks.

“There may be times that arise when a student, teacher or somebody else in a school contracts COVID-19. If that is the case, the school does have the option of being able to shut down for a series of days to make sure they can sanitize the school,” he said.

Abbott said periods of remote learning during the school year are also an option to remedy an outbreak.

He reinforced what Texas Attorney General Ken Paxton said last week – school districts and not public health officials have the final say on when to reopen campuses.

They are allowed to delay in-person classes for up to eight weeks after the start of the year and after that can still get a waiver if needed.