Gov. Abbott gets COVID-19 vaccination in effort to assure Texans of safety, importance

Gov. Abbott said&nbsp;he&nbsp;received the shot at an Austin hospital to help reassure the public that COVID-19 inoculations are safe.

AUSTIN, Texas - Republican Gov. Greg Abbott received the COVID-19 vaccine on Tuesday as the number of patients hospitalized with the virus in Texas has again climbed past the troubling mark of 10,000 for the first time since this summer's deadly peak.

Abbott said he received the shot at an Austin hospital to help reassure the public that inoculations are safe.

"I want to show my fellow Texans, that it's safe and easy to get the vaccine and also remembering that I will never ask any Texan to do something that I'm not willing to do myself," Abbott said. 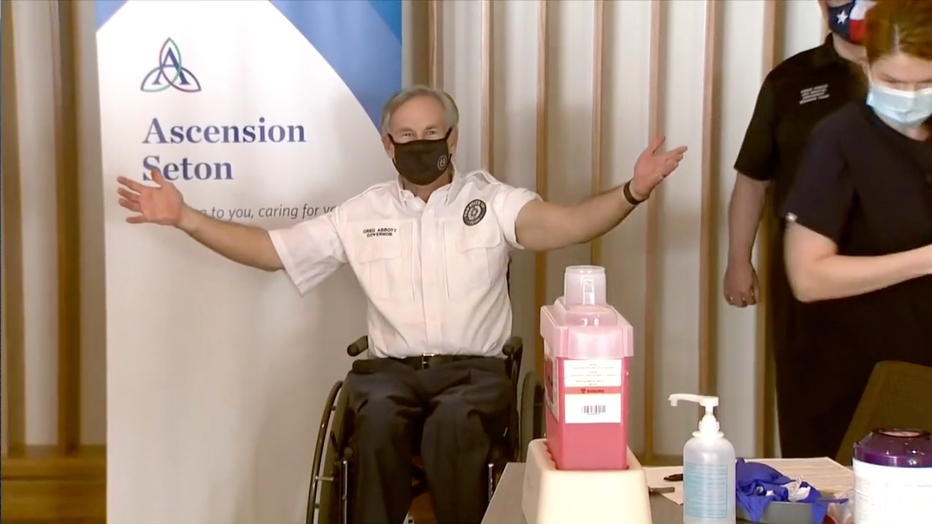 The governor took the shot after a conversation with the head of the CDC and U.S. Secretary of Health Alex Azar about governors leading their states by example.

A survey of Texans indicates quite a few of us are not yet sure about getting the virus vaccine.

"There was a report that came out recently that showed that more than half of Texans were either unwilling or unsure about taking the vaccine because maybe you have some concerns about it," Abbott said. "And that’s exactly why we're here."

That survey by the Episcopal Health Foundation found that overall 59% of Texans say they are likely to take the vaccine, but right at 40% say they are unlikely.

Those numbers though show a 10% improvement from the September survey. Then, half of Texans questioned said they were unlikely to get the vaccine.

"These vaccines are so effective. They're really, if you will, a platinum standard for the effectiveness of vaccines. So we're very blessed by that," he said. "There is a lot of vaccine enthusiasm and eagerness that’s out there in the state of Texas that couldn't be better. We really want to sustain that. And over time as we get more and more vaccine, this will eventually be what puts the pandemic behind us and makes the pandemic a part of history."

Right now, healthcare workers are part of the history-making moment of taking the vaccines. The governor wants all Texans to have their shot in history as well.

"There will come a time when there will be availability for everybody to have a vaccine," Abbott said. "And we want to make sure that people in the state of Texas can have trust and confidence in this vaccine."

Abbott has emphasized that hundreds of thousands of doses are coming to Texas at a time when newly confirmed cases and hospitalizations continue soaring. Texas has not had this many hospitalized COVID-19 patients since July, when there were more than 10,800 patients across the state.

Last Thursday smashed a single-day record for new cases with more than 16,000, which state officials partly attributed to holiday gatherings.

But Abbott has said he will not order a new round of lockdown measures, and on Monday, even announced a new reopening: the Texas Capitol will, which has been closed since March.

The Capitol will reopen Jan. 4, which is roughly a week before the Texas Legislature reconvenes for the first time since 2019.

Around the Capitol, health officials say spread of the virus is worsening. On Monday, public health officials in Austin said that new cases were up 86% since the beginning of December. Officials recommended that Austin residents avoid travel and avoid gatherings, and also warned that a curfew could be installed if hospitalizations continue to rise.

"The best gift we can give this Christmas is masking and distancing and staying home if we can," said Dr. Mark Escott, the city's interim health authority.

Abbott said health and safety protocols will be put in place for the Capitol's reopening. More than 26,000 frontline and other essential workers in Texas as of Monday had received the first vaccinations that began arriving this month, according to state health officials. Abbott has said more than 1 million doses of the vaccine will have been distributed in Texas by the end of the month.