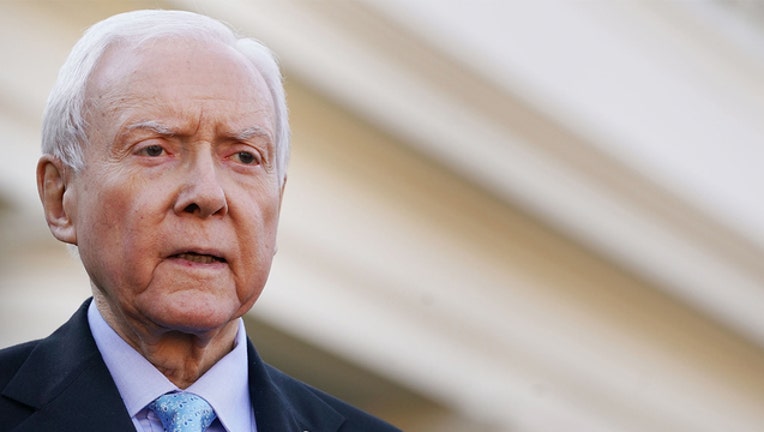 WASHINGTON - (AP) -- Republican Sen. Orrin Hatch of Utah said Tuesday he will not seek re-election after serving more than 40 years in the Senate, opening the door for former GOP presidential nominee Mitt Romney to run for his seat.

Hatch, 83, said he's always been a fighter, "but every good fighter knows when to hang up the gloves."

Hatch is the longest-serving Republican in the Senate. He chairs the powerful Senate Finance Committee and was a major force in getting a tax overhaul through Congress and signed into law in December.

He also played a key role in persuading President Donald Trump to sign proclamations scaling back two sprawling national monuments in Utah that Hatch and other conservatives considered examples of government overreach.

In a statement, Hatch said he decided to retire at the end of his seventh term after "much prayer and discussion with family and friends" over the holiday break.

"Only in a nation like ours could someone like me — the scrappy son of a simple carpenter — grow up to become a United States Senator," he added.

Romney, the former Massachusetts governor who now lives in Utah, has been eyeing a Senate run, but Trump had encouraged Hatch to seek re-election.

Romney thanked Hatch in a statement on Facebook and said Hatch "has represented the interests of Utah with distinction and honor."

Romney's statement did not mention his own plans.

Trump had been open in recent months about pressuring Hatch to stay in the Senate, particularly as Romney's ambition for the seat became apparent. Trump's private lobbying campaign was bolstered by a public love-fest, as Trump invited Hatch with him on Air Force One in December as he shrunk the boundaries of the two Utah monuments.

Trump called Hatch "a fighter" and "a special friend of mine," and thanked Hatch for his vocal support when "it wasn't exactly the easiest thing to do."

Romney has a far more tortured relationship with the president, having been a vocal critic of Trump's during the 2016 campaign, including delivering a broadside address in March 2016 condemning Trump. But after the election, Romney submitted himself as a candidate to be secretary of state in an excruciatingly public interview process.

Since Trump has moved into the White House, Romney has been a frequent detractor, particularly after Trump equivocated on condemning white supremacists in Charlottesville last summer.

White House press secretary Sarah Huckabee Sanders said Tuesday she had not discussed Romney's potential candidacy with Trump and could not say whether the president would support him.

Amid earlier speculation about Hatch's plans, the Utah senator stepped up to defend Romney, a fellow Mormon. Last month Hatch lashed out at former White House adviser Steve Bannon for his attack on Romney and the Mormon Church.

At a rally for Alabama Senate candidate Roy Moore, Bannon called Romney, the GOP's 2012 presidential nominee, a draft dodger who "hid behind" his religion. Romney received a draft deferment for missionary work in France during Vietnam.

Hatch called Bannon's attack "disappointing and unjustified" and said Romney "has sought every opportunity" to serve the country.

Hatch defended "the selfless service of missionary work" and said he'd be happy to explain his church to Bannon, adding, "I've got a copy of the Book of Mormon with his name on it."

Late last year, Hatch also found himself in a heated debate with Democratic Sen. Sherrod Brown of Ohio. The dispute occurred as Republicans pushed a near $1.5 trillion, 10-year tax cut for businesses and individuals through the Senate Finance Committee over Democrats' objections.

Brown, a liberal firebrand, said people know Republicans want to help the rich because it's "in their DNA."

Hatch told Brown he'd heard enough, adding that he's helped disadvantaged people "my whole stinking career." As the two senators talked over each other, Hatch said he was tired of Democrats' "bull crap."

In the statement announcing his decision to retire, Hatch cited work helping create the Americans with Disabilities Act, expanding children's health insurance and expanding use of generic drugs.

Hatch also served as chairman of the Senate Judiciary Committee and was at the center of many of the biggest confirmation battles. During his time on the committee, the Senate has confirmed nearly 1,900 federal judges.

In 2000, Hatch sought the Republican nomination for president, saying he had more experience in Washington than his opponents and insisting he could work with Democrats. He withdrew from the race after only winning 1 percent of the vote in the Iowa caucuses and then endorsed George W. Bush.

Hatch frequently wrote religious songs and recorded music in his spare time as a way to relax from the stresses of life in Washington. One of his songs, "Unspoken," went platinum after appearing on "WOW Hits 2005," a compilation of Christian pop music.

While seeking re-election in 2012, Hatch pledged it would be his last term. He seemed to waver on that decision in recent months with Trump publicly calling on him to run again.

Romney would enter the Senate race as the heavy favorite, having carried Utah in 2012 by a margin of nearly 3 to 1 over Democrat Barack Obama. Romney, an unabashed Trump critic, would likely be among a small number of influential Republicans willing to take on Trump.

Derek Miller, a Utah businessman who had been considering a run for Hatch's seat, said Tuesday that Romney has popped up more frequently at policy gatherings, chamber of commerce meetings and social events in Utah.

"I go to events and I see Gov. Romney there, over the last couple months, when I never saw him at those events before," Miller said.