A Republican Texas lawmaker tweeting he had an assault rifle "ready" for Democratic presidential candidate Beto O'Rourke drew criticism Friday for the apparent threat amid heightened tensions over guns after two mass shootings in the state.

Cain didn't immediately respond to a reporter's request for comment.

The U.S. Secret Service said Friday that O'Rourke is not currently under the agency's protection and declined to comment further.

O'Rourke, a former Texas congressman, has made gun control his signature issue in the aftermath of a mass shooting last month in his hometown of El Paso. A gunman who told police he was targeting Mexicans opened fire at a Walmart on Aug. 3 and killed 22 people, most of whom had Hispanic last names.

O'Rourke's outspokenness on guns since the El Paso attack earned praise from his rivals on the debate stage in Houston, although it hasn't elevated his standing in the race.

He told CNN on Friday that Cain's tweet "drives home the point, better than I could've made" that such weapons shouldn't be readily available. 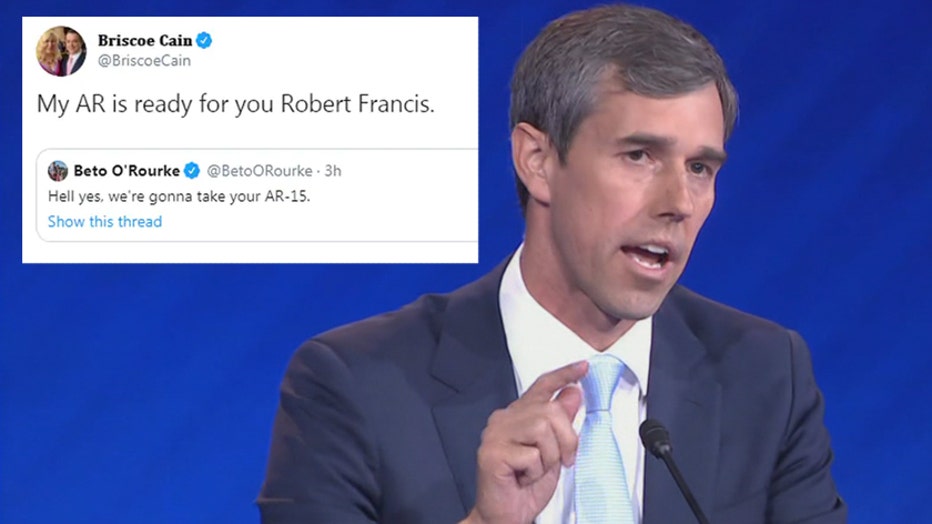 "No one should have an AR-15 that they could hold over someone else in this country, say, `Look, if we disagree on something, let me introduce you to my AR-15.' Absolutely wrong," O'Rourke said.

Cain is a lawyer who was first elected in 2016 and is part of the small Freedom Caucus in the Texas House that represents the GOP's most socially conservative wing. Last year, Cain called for recouping tax dollars from any public school that allowed students to walk out in support of gun control measures following a mass shooting at a high school in Parkland, Florida.

His tweet came during a politically charged moment in Texas over gun control following the El Paso shooting and a Labor Day weekend rampage in West Texas that left seven people dead.

"In case you forgot, people were just killed in El Paso. People were murdered," tweeted Democratic state Rep. Mary Gonzalez. "The language you are using and the way you are using it is dangerous. We need leaders who want to change our culture of violence."

Polls have shown the majority of Americans favor more restrictions on guns and most of the Democratic field has called for a ban on assault weapons.