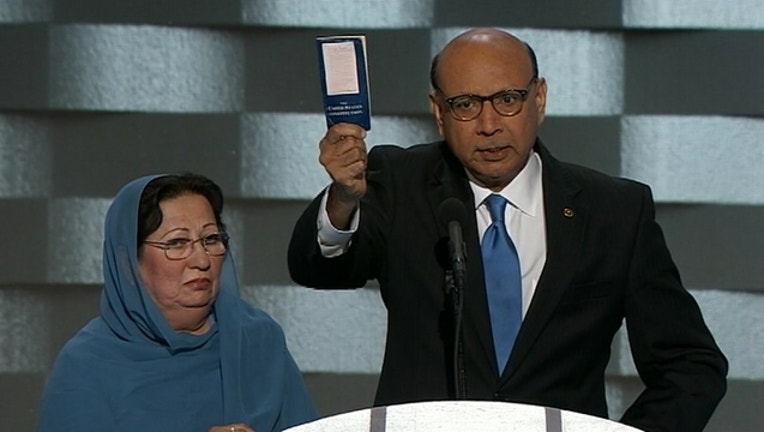 NEW YORK (AP) — Fellow Republicans are joining the rising chorus of criticism of Donald Trump for his disparagement of the bereaved parents of U.S. Army Capt. Humayun Khan, a Muslim who was awarded a Bronze Star after he was killed in 2004 in Iraq.

The roll of GOP senators publicly taking Trump to task reached at least five on Monday, including John McCain of Arizona, who said in a statement that the fact that Trump won his party's nomination doesn't give him "unfettered license to defame those who are the best among us."

Pat Toomey of Pennsylvania said the Khans "deserve our gratitude and honor; anything else is inappropriate."

The other three senators, all running for re-election and distancing themselves from Trump's controversial statements, are Roy Blunt of Missouri, Ron Johnson of Wisconsin and Rob Portman of Ohio. Rep. Mac Thornberry of Texas, chairman of the House Armed Services Committee, said he's dismayed by criticism of the parents, and both Senate Republican leader Mitch McConnell and House Speaker Paul Ryan have issued statements praising Khan.

Pushing back, Trump complained Monday that he had been "viciously attacked" by Khan's father at the Democratic National Convention and in the days that have followed.

Trump broke a political and societal taboo over the weekend when he criticized Khizr and Ghazala Khan. Khizr Khan did strongly criticism Trump during the convention and after, and his wife has joined in since then. Trump stoked further outrage by implying Ghazala Khan did not speak while standing alongside her husband at the convention because she is a Muslim woman.

Trump tweeted Monday that "Mr. Khan, who does not know me, viciously attacked me from the stage of the DNC and is now all over T.V. doing the same." He said the focus should be on "radical Islamic terrorism," not the parents.

Khizr Khan told CNN on Monday that "We want to be out of this controversy. That is not our style," even as the couple kept up a round of TV appearances. Said his wife: "My religion or my family or my culture never stopped me from saying what I want to say. I have all the rights as a wife, as a mother, as a daughter."

At last week's convention, Khizr Khan criticized Trump for proposing to freeze the entry of foreign Muslims into the U.S. and accused him of making no sacrifices for his country.

On Monday, Blunt advised Trump to "focus on jobs and national security and stop responding to every criticism whether it's from a grieving family or Hillary Clinton." Senators running for re-election — and Senate and House leaders — are concerned that the Republican nominee will damage their own campaigns.

The continuing controversy risks setting back whatever progress Trump made during his convention at winning over the independent voters who will probably be key in the fall election.

Yet he's repeatedly made inflammatory statements at little apparent political cost — and sometimes to his benefit — going back to the beginning of the campaign when he challenged the heroism of McCain, a prisoner of war in Vietnam, and branded Mexican immigrants rapists and criminals. Many of his supporters have been drawn to his tendency to say the politically unthinkable. The question is whether this, finally, is a step too far.

For the second time in a week, Trump's running mate, Indiana Gov. Mike Pence, issued a statement that appeared designed to put some space between the two men. The father of a Marine, Pence said Sunday that he and Trump believe Capt. Khan is a hero and his family "should be cherished by every American."

Last week, Pence said Russia would face "serious consequences" for meddling in U.S. elections at roughly the same time Trump appeared to encourage it, telling reporters he would welcome Russia unearthing emails that Clinton deleted from the private servers she used while secretary of state.

Pence's statement came after an afternoon of debate among his aides as to whether he should find a way to dissociate himself subtly from Trump's comments, according to a person familiar with the internal campaign conversations who spoke on condition of anonymity because the person was not authorized to discuss them publicly.

At the Democratic convention, the Pakistan-born Khizr Khan told his son's story, questioned whether Trump had ever read the Constitution and said "you have sacrificed nothing." During the speech, Ghazala Khan stood quietly by his side.

Trump responded in an interview with ABC's "This Week," saying: "If you look at his wife, she was standing there. She had nothing to say. She probably, maybe she wasn't allowed to have anything to say."

Ghazala Khan wrote in Sunday's Washington Post that she did not speak because talking about her son's death remains difficult. "Every day, whenever I pray, I have to pray for him, and I cry," she wrote.

Associated Press writers Cal Woodward in Washington, Steve Peoples in Colorado and Catherine Lucey in Iowa contributed to this report.