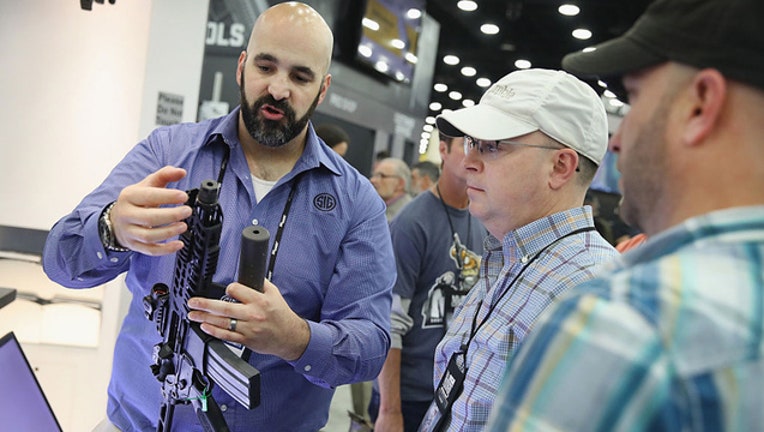 LOUISVILLE, KY - MAY 21: Jim Hadley (L) shows off SIG SAUER silencers at the NRA Annual Meetings & Exhibits on May 21, 2016 in Louisville, Kentucky. About 80,000 visitors are expected to attend the three-day event. (Photo by Scott Olson/Getty Ima

WASHINGTON (AP) - Republican leaders made clear Tuesday that Congress will take no action on gun legislation in the wake of the massacre in Las Vegas. They refused to entertain Democratic demands to expand background checks for gun purchases and tighten restrictions on semi-automatic weapons, but also shelved their own House bill that would have loosened access to gun silencers.

"I think it's premature to be discussing legislative solutions, if there are any," Senate Majority Leader Mitch McConnell, R-Ky., told reporters after the mass shooting that killed at least 59 people and wounded hundreds more.

House Speaker Paul Ryan, R-Wis., said there is no plan for the House to act soon on the silencer bill, which a Republican-led House committee backed last month. The bill's sponsor, Rep. Jeff Duncan of South Carolina, said it would help hunters protect their hearing.

The silencer bill is "not scheduled right now. I don't know when it will be scheduled," Ryan said.

The congressional inaction underscored the power of the National Rifle Association and the political stakes for lawmakers who maintain their support for the constitutional right to bear arms and fear any challenge to their fealty.

Rep. Chris Collins, R-N.Y., said action on guns after Las Vegas was unnecessary, "We are not going to knee-jerk react to every situation."

Four years ago, after the deadly school shooting in Newtown, a bipartisan bill on background checks failed in the Senate.

The complicated politics of guns was personified by West Virginia Sen. Joe Manchin, a Democrat up for re-election next year in a state carried overwhelmingly by President Donald Trump.

Manchin, who co-sponsored the failed bill that would have expanded background checks, said Tuesday, "I come from a gun state and I am a protector of Second Amendment rights and I understand these people's fear."

West Virginia residents "cherish the right to be able to go hunting with their family ... sport shooting and all the things we do enjoy," Manchin said, adding that any potential legislation must be based in common sense.

"It's just common sense to say that if a person is such a risk to get on an airplane that they get (put) on the no-fly list, don't you think there should be some concern and prevention from them being able to still buy a gun in America?" Manchin said, adding that any movement on the issue will depend on Trump.

"The president could really take a lead on this. He really could," Manchin said.

Trump has called the Sunday night shooting at an outdoor music festival an "act of pure evil" and declared the nation would unite behind the survivors.

Democrats pressed for a response.

Rep. Judy Chu, D-Calif., said on Twitter: "It's not 'political' to urge action to stop the regular killing of Americans by guns. It's responsibility. Silence is the political choice."

"One of the few ways the police had to go after this shooter was they could look for the sound, try to hear the sound of where the guns came from," Schumer said on the Senate floor. "Thank God our colleagues on the other side of the aisle have pulled back on this bill."

Schumer and other Democrats noted that Republicans postponed a hearing on the silencer bill in June when House Majority Whip Steve Scalise, R-La., and others were shot at a congressional baseball practice.

"When two mass shootings force you to delay a bill that would make those mass shootings harder to detect and stop, maybe that's a sign you ought to let go of the bill once and for all," Schumer said.

Besides the silencer measure, House GOP leaders had been moving forward with a bill to allow people with concealed-carry permits to take their weapons to other states. A vote on that measure also seemed unlikely.

Sen. Lindsey Graham, R-S.C., said he was "open-minded to anything that would shed light on what happened and how to fix it without giving people false hope that we're one law change from fixing things like this."