IRVING, Texas - Flames and smoke took over at the Remington Hills at Los Colinas Apartments in Irving Saturday morning.

There were about 10 apartments damaged by the fire, but no one was hurt.

"And then I started smelling like burnt paper and burnt wood, so I ran on the staircase and then I saw like burnt boxes on the floor," recalled Darvon Sarpu.

The actions taken by Sarpu might have saved lives.

He said he stumbled upon the fire heading up an elderly neighbor's back porch.

He ran to her front door to tell her, and at first, she thought he was pulling a prank.

"She came out because she saw me banging on the door. She thought somebody was ding-dong-ditching. You know how them little kids knock on the door and run, trying to be fun," Sarpu explained.

But he wasn't trying to be funny.

He was trying to save her, and others.

Sarpu said after letting her know, he ran from her first-floor apartment to warn people in the upstairs apartments.

"I didn't know it could spread that fast, because by the time I was already on the third floor from alerting them to get other people out, it was already on the second floor. I thought I was trapped because there was a black smoke on the staircase. I had to run through it," Sarpu explained. 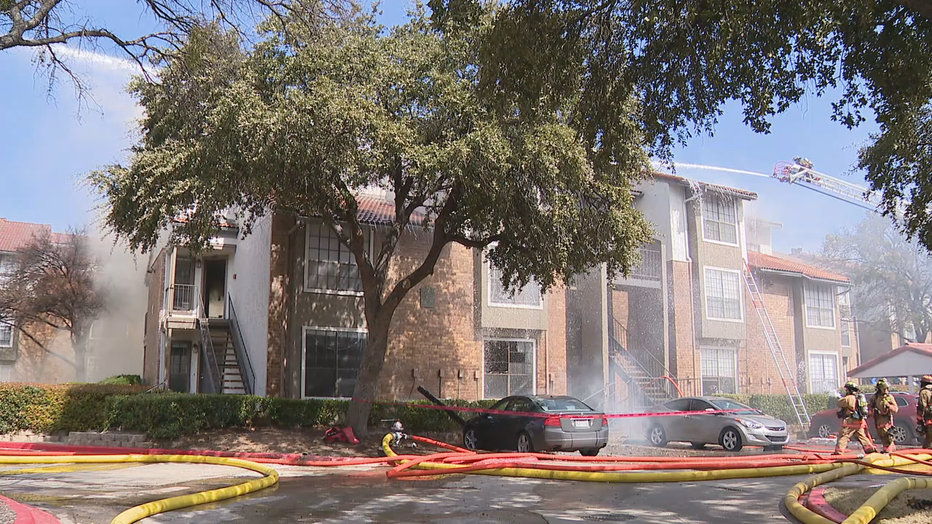 He safely made it out.

Firefighters, about 60 of them, arrived a short time later.

"The fire was about as tall as the building by the time they came," Sarpu said.

"I know that the wind definitely played a role in causing the fire to grow exponentially," said Irving Fire Department Lt. Lorenzo Chavez.

Fire officials said it's too early to know what exactly caused the fire.

All Sarpu knows for sure is that he's glad he was there to help.