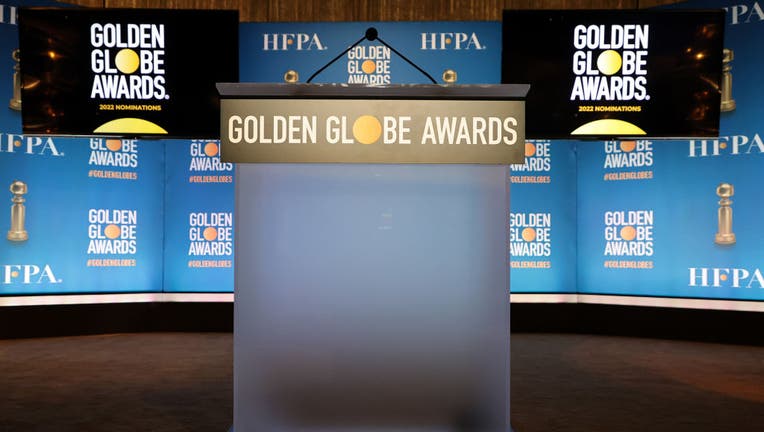 The stage is set for the 79th Annual Golden Globe Award nominations at The Beverly Hilton on December 13, 2021 in Beverly Hills, California. (Kevin Winter)

Following widespread criticism during last year’s awards season, the Golden Globes carried on Sunday night — though not exactly as planned.

The winners of the 79th Annual Golden Globe Awards were revealed from the Beverly Hilton at 6 p.m. PT, but the show took place amid an unofficial boycott, of sorts, without a red carpet, host, nominees, audience or even a televised broadcast following a year of widespread criticism about the Hollywood Foreign Press Association (HFPA’s) diversity and ethics issues.

The show took place as a "private event," the HFPA announced earlier this week, and was not live-streamed.

The association provided real-time updates on the winners on the Golden Globes website and social media. Those attending the small event saw a show that "shines a light on the long-established philanthropy work of the HFPA," the press association said earlier this month.

WATCH: Globe winner Will Smith in "Enemy of the State"

But why did this year’s show happen without any celebrities or television production? Here’s a look back at the HFPA’s and the Golden Globe’s tumultuous year.

RELATED: ‘Squid Game’ is a huge hit. ‘Battle Royale’ should be, too.

Why were the Golden Globes boycotted?

The HFPA’s tussle with diversity and ethics issues came to a head last year after a shocking lack of nominations for Black talent. A Los Angeles Times’ expose also revealed unethical behavior and that its 87 voting members didn’t include one Black journalist.

Studios said they would boycott the Globes and more than 100 PR films said their clients wouldn’t participate until the HFPA swiftly implemented "profound and lasting change." Tom Cruise returned his three Globes to the group’s headquarters.

The press association claims that in the months since its 2021 show, it has remade itself.

RELATED: The essential musicals of 2021: "West Side Story," "Encanto," "In the Heights" and more

"HFPA 2.0," recently elected president Helen Hoehne has called it. The group announced in November several reforms, including adding a chief diversity officer; overhauling its board; inducting 21 new members, including six Black journalists; bringing in the NAACP on a five-year partnership; and updating its code of conduct.

But still, Hollywood was skeptical this awards season.

NBC, the Globes’ longtime telecaster, said it won’t air the 2022 Globes because "change of this magnitude takes time and work." And the association struggled to find any celebrity presenters agreeing to take part, according to a Variety report.

The HFPA cited the current pandemic surge as a reason for going audience-less on Sunday.

This story was reported from Detroit and Atlanta. The Associated Press contributed.

The Dorians TV Toast 2021 (2021): For more of the best TV of the year, The Society of LGBTQ+ Entertainment Critics invites you to watch this festive celebration of the best of 2021’s television season.