Terrence Floyd said he wants justice handed to the officers responsible for his brother's death, but feels violence is not what his sibling would have wanted.

MINNEAPOLIS - The younger brother of George Floyd is calling for the end of violent protests and riots that have escalated in the U.S. over the past week, according to a report on Sunday.

Terrence Floyd told ABC News he wants justice handed to the officers responsible for his brother's death, but as violent demonstrations are currently wreaking havoc in many cities across the country, he feels they are not what his sibling would have wanted.

"[S]ometimes I get angry, I want to bust some heads, too," Terrence Floyd said. "I wanna ... just go crazy. But I’m here. My brother wasn’t about that. My brother was about peace. You’ll hear a lot of people say he was a gentle giant.“

George Floyd, 46, died Monday night and video later emerged showing him on the ground with a police officer pressing his knee against his neck. Footage released of the incident showed Floyd shouting, “I cannot breathe” and “Don’t kill me.” 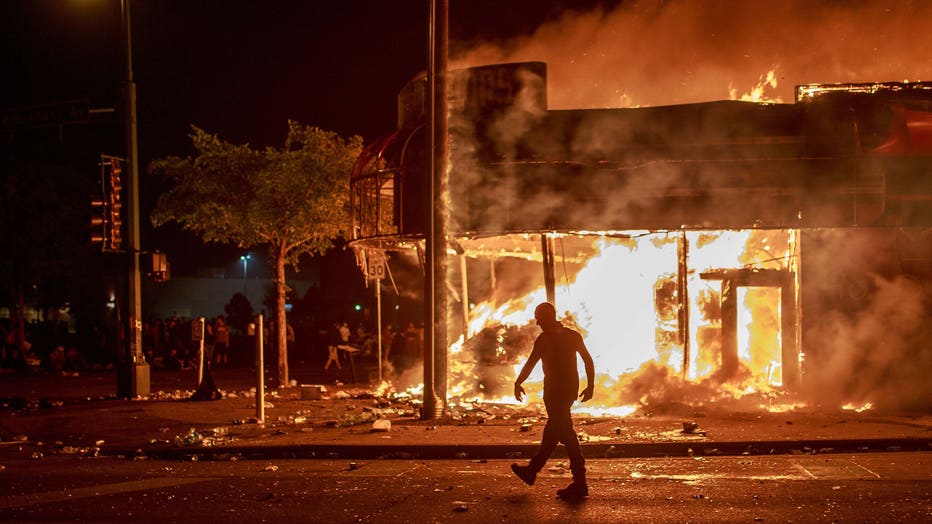 A man walks past a liquor store in flames near the Third Police Precinct on May 28, 2020 in Minneapolis, Minnesota, during a protest over the death of George Floyd, an unarmed black man who died after a police officer kneeled on his neck for several

The officer responsible, Derek Chauvin, was charged with third-degree murder and second-degree manslaughter in his death.

The incident originally sparked peaceful protests, but many have turned violent amid clashes between demonstrators and law enforcement. Curfews have been implemented in cities throughout the U.S, with the National Guard being called in amid fires, vandalism, and looting.

"Don’t tear up your town, all of this is not necessary because if his own family and blood is not doing it, then why are you?" Terrence Floyd told the news organization. "If his own family and blood are trying to deal with it and be positive about it, and go another route to seek justice, then why are you out here tearing up your community? Because when you’re finished and turn around and want to go buy something, you done tore it up. So now you messed up your own living arrangements. So just relax. Justice will be served."

He added that his brother was known in the community for his positivity and he wants him to be remembered that way, not for the violence stemming from his brother's tragic death in the hands of police custody. Even after the death of his sibling, Floyd took the high road amid reignited tensions between police and the black community.

"Do something positive. Stop making excuses," Terrence Floyd told ABC News. "And that’s what I feel is going on: They’re using this as an excuse to be stupid."