MOAB, Utah - Newly-released body camera video from Utah police shows their encounter with Gabby Petito – a North Port woman who has since gone missing – and her boyfriend, Brian Laundrie, which lasted for over an hour and resulted in the two being separated after a physical encounter occurred between the couple earlier in the day.

For over an hour, an emotional Gabby Petito sat in the back of a patrol vehicle on the side of a Utah road while Brian remained outside their camper van as law enforcement officials sorted out what transpired after a witness called police reporting a possible domestic violence situation between the two on August 12.

Moab police released a report Wednesday about the incident. A witness, referred to as Chris, said he saw Brian and Gabby, apparently arguing over a phone. Chris said Brian got into the van and Gabby apparently striking Brian on the arm. Chris said Gabby then climbed through the driver’s side window, as if Brian had locked her out and she was trying to find a way in," the report stated.

Full video from the Moab City Police Department in Utah shows officers investigating an incident between Gabby Petito and her boyfriend, Brian Laundrie.

While Officer Pratt investigated at the original scene, Officer Daniel Robbins caught up with Brian and Gabrielle, who drove away from the co-op in the camper van they had been traveling in. They were pulled over near Arches National Park, the location of one of Gabrielle’s last social media posts before she went missing.

A New York-based attorney read a letter to the parents of Brian Laundrie, accusing them of knowing the location of a missing North Port woman, Gabrielle Petito, and asking them to come forward and say what they know.

MORE: 'We beg you to tell us': Attorney accuses Laundrie family of withholding Gabby Petito's location

Ultimately, it led to no charge or citation against Gabby after officers observed scratches on Brian's face and arms. During the body camera video, Gabby also told officers she had no intent to harm Brian.

"What were you intending to do?" an officer is heard asking in the body camera video. "What was the reason behind the slapping?"

"I was trying to get him to stop [telling] me to calm down," Gabby says while in tears.

"Well, it doesn’t sound to me that she attempted to injure him," the officer says.

The footage begins with a Moab police officer, wearing the body camera, communicating to dispatch that Brian was traveling 45 mph in a 15 mph zone.

"Oh! Subject just hit the curb," the officer is heard saying, before they pulled over. 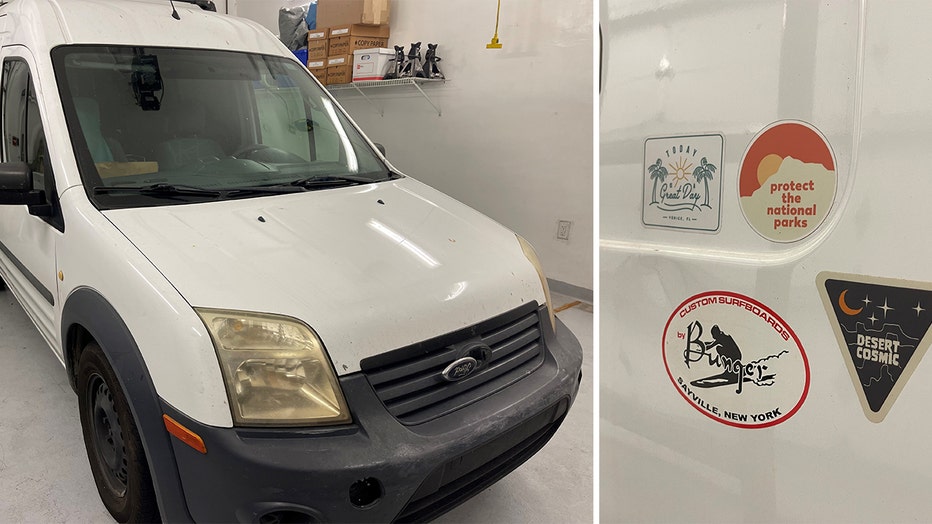 The camper van Gabby and Brian were traveling in. (Provided by North Port police)

Gabby is seen rolling down the passenger window, apologizing to the officer and saying they were fighting.

The officer separated the two, and the ordeal lasted for about an hour and 15 minutes. During most of the encounter with Gabby, she was crying. By the end of the interaction, her face was red and eyes were puffy. For Brian, he was seen making jokes and laughing with officers, all while recounting what led up to the traffic stop. At the beginning, he asked if he can sit in the shade.

In body camera video, an emotional encounter plays out as they describe their argument from earlier in the day that almost led to a domestic violent charge.

"Can I sit in the shade because I'm bald?"

A responding park ranger looked around and walked closer, raised an arm and said, "I'll give you some shade." 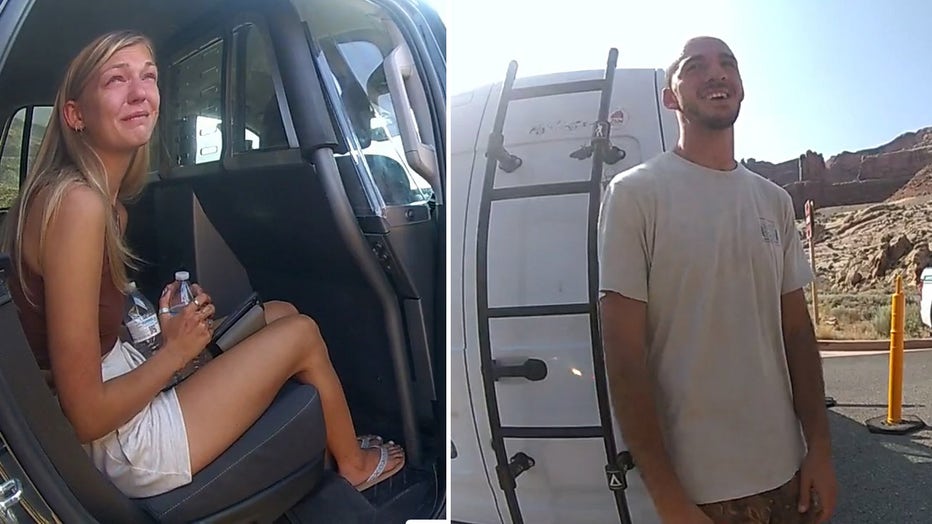 In another part of the video, Gabby told the officer she was apologizing to Brian for being mean earlier, saying they were fighting "all morning."

"I have really bad OCD. I was just cleaning and straightening up…I’m sorry that I’m so mean," she says, "because sometimes I have OCD and sometimes I get so frustrated."

She explained that she was a nutritionist, and quit her job to travel across the country and start a blog.

"He doesn’t believe I can really do any of it," she says.

"She gets worked up sometimes," Brian says in the body camera video. "I try to really distance myself from her. What happened this morning is that she’s trying to start up like her own little website/blog. We really had a nice morning, but she just worked up because we were trying to get going and get our day going." 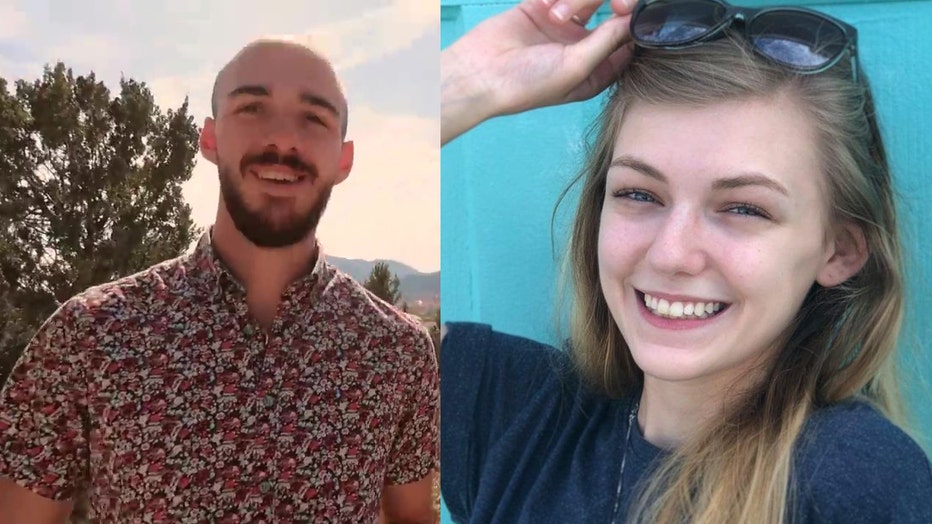 One discrepancy that was brought up was the reason why Brian hit the curb before the traffic stop. Brian said Gabby grabbed the steering wheel. Gabby said she didn't. One officer suggested that Brian was covering for Gabby.

In Utah, one of the officers explained, if there is a domestic violence assault charge, there is an automatic no-contact order. As a result, another officer was trying to get in touch with a third party to set up a hotel for Brian. While on the phone, he also asked if there could be a hotel room available for Gabby, but the response is unclear based on the body camera video.

However, the officer did say, "I had to make sure I at least asked. I didn’t know if that would make your life any easier."

From across the country and on the ground, those related to Gabrielle Petito are doing everything they can to figure out what happened to the young woman

After telling the couple that no charges will be filed, the officer advised Gabby and Brian to not contact each other that night.

"I’m choosing not to cite you today," he tells Gabby. "So, you’re not going to be charged. But this is what I am going to do. I am going to separate you two tonight. You’re going to be taking the van tonight and you’re going to go somewhere else. I am going to get him lined up in a hotel room tonight. I want you guys to stay away from each other for both of you guys’ sanity. From what you told me and what he told me, you guys have a lot of little things that are building up, building up that finally the little string you guys were tight-walking on broke."

He escorted Gabby to the camper van, before driving Brian to the hotel.

During the car ride, the officer said Gabby reminds him of his own wife.

"My wife has really really bad anxiety and she takes medication for it daily. Sometimes, it’s not enough. Sometimes it just builds up," the officer says. "I will say this, when my wife got put on the medication, within a week, I saw a complete turnaround in her attitude. Her demeanor. She wasn’t nearly aggressive, or angry. It was a considerable difference in her day-to-day life. It made her quality of life better. It’s made my quality of life a lot better too because I don’t have her being as stressed. I know, five and half years of marriage, isn’t very long but at the same time you learn a lot."

Family members of missing woman 'beg' boyfriend for her location

The families of Gabby Petito and Brian Laundrie released statements Tuesday, both expressing their hopes for Gabrielle's safe return, but with critical details still missing.

Brian has since been named a person of interest in the case by North Port police and has been refusing to cooperate. FOX 13 reached out to his attorney, asking for a response after the body camera was released.

The attorney, Steven P. Bertolino, replied, "No comment," in an email.

On September 1, Brian returned home to his family in North Port, where Gabby was also residing. Gabby's family reported her missing on September 11 and North Port police confiscated the camper van.

North Port police said Brian is still not cooperating in the investigation and has not made himself available to detectives to provide "helpful details."

While Brian has remained silent as searches for Gabby get underway, her family has become increasingly vocal in the calls for him to talk and for the public to be on the lookout.

For now, the FBI has set up a national hotline to receive tips: 1-800-225-5324 or submit tips to tips.fbi.gov. North Port police have taken the lead in the investigation due to Brian residing in the city, and the hotline will be the primary contact for any incoming tips.

During a press conference Thursday, North Port Police Chief Todd Garrison said they investigators have looked at all potential evidence, including the body camera footage.

"We look at everything that is coming in," he said. "Yes, they had a disturbance. Yes, it was captured on body camera, their interaction with law enforcement. Beyond that, I don’t know what it has to do with the disappearance."

In an interview with FOX & Friends, Chief Garrison said law enforcement in Utah appeared to take the action they thought was necessary that day.

"It’s not uncommon that people have disagreements in relationships," he said. "I don’t know if that altercation had anything to do with that disappearance at all."