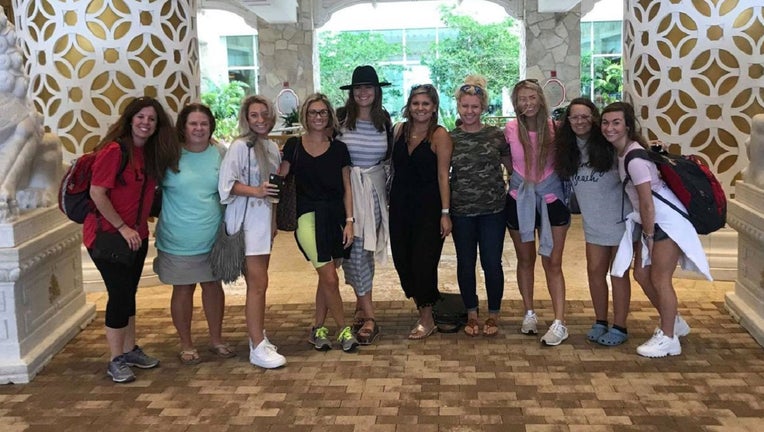 ATLANTA - A Georgia woman turned her bachelorette weekend in the Bahamas into a relief mission to help the victims of Hurricane Dorian.

Earlier this month, Dorian blasted through the northern Bahamas, killing at least 50 people as one of the strongest Atlantic hurricanes on record. The Category 5 storm unleashed flooding that reached up to 25 feet in some areas, then remained nearly stationary for a day and a half.

Rikki Kahley, of Macon, had planned to celebrate her upcoming nuptials with her best friends at Baha Mar resort in Nassau, but when Dorian rolled through the trip almost didn't happen.

Kahley was going to cancel due to Dorian's destruction but decided to go as planned after speaking with an employee at the resort. Her sister, Chloe, had an amazing idea to transform the trip from a bachelorette party into a relief mission for the victims. That's exactly what they did.

The bride and her tribe took to Facebook to ask for donations. They originally planned on taking just 10 extra suitcases, but they ended up bringing nearly 40 bags of supplies. From baby formula to toiletries, shirts and other clothing, to food and more essentials.

'Hour of darkness' for Bahamas; 44 dead, with toll to rise

Tentative list of the missing in Bahamas has 2,500 names

How to help animals affected by Hurricane Dorian

The women left for the Bahamas from Atlanta's Hartsfield-Jackson International Airport on Sept.12, and were greeted by transport buses at the Nassau airport, provided by Baha Mar. The buses took the donations to a local church to be distributed to those in need.

"We give God all the glory," Kahley told FOX 5's Katie Burk. "It wouldn't have been possible without Him providing us with a way to help provide for the Bahamians."

Kahley's wedding is planned for Oct. 26.

Mental health counselors are now fanning out into communities to help those traumatized by the direct hit of the Category 5 storm. A tentative list of the missing in the Bahamas has 2,500 names.