When Britney Spears, who turns 40 this year, speaks to a Los Angeles judge at her own request on Wednesday, she'll do it 13 years into a court-enforced conservatorship that has exercised vast control of her life and money. But what is a conservatorship, exactly?

Here's a look at how conservatorships operate, what's unusual about hers, and why the cry to "free Britney" keeps getting louder.

The basics of Britney Spears’ conservatorship

By legal definition, a conservatorship is a court case where a judge appoints a responsible person or organization to care for another adult who cannot care for himself or herself or manage his or her own finances.

Conservatorships are often instated for elder people and adults who cannot take care of themselves or their finances, but can also be for younger people who have been seriously impaired.

Thus, according to law experts, it is rare for Britney to be under a probate conservatorship, which means that her daily life, including her finances, have been overseen by her father, Jamie Spears.

Her father has largely been in charge through the years, and the stereotypical image of a parent preying on a famous child’s fortune fuels the enmity against James Spears and the conservatorship, though his every move is scrutinized by the court.

Legally, Spears can get married, but the conservatorship must approve it as with other major life decisions.

Like all California conservatorships, hers is subject to annual accountings and reviews from a court investigator. 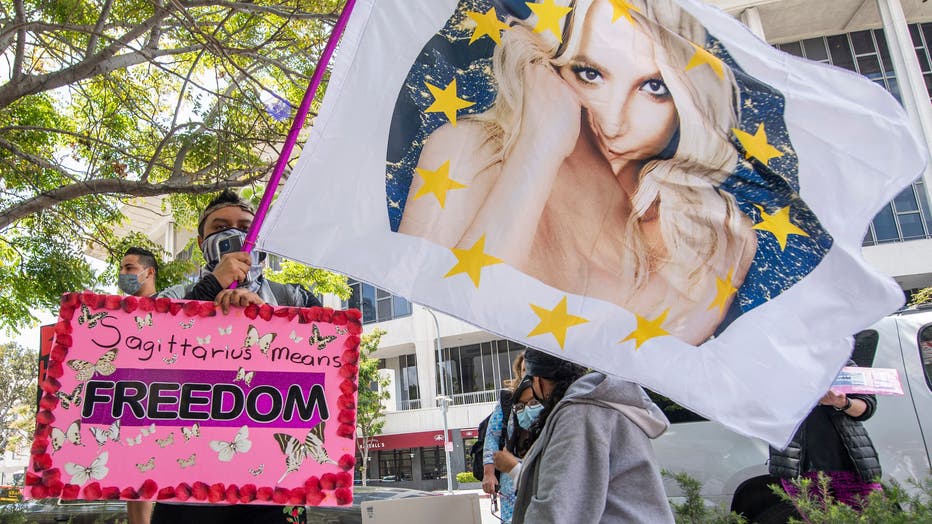 Supporters of the FreeBritney movement rally in support of musician Britney Spears following a conservatorship court hearing in Los Angeles, California on April 27, 2021. - Britney Spears has requested to speak in court in the legal battle over her f

In 2007 and 2008, shortly after she became a mother, Britney began to have very public mental struggles, with media outlets obsessed over each moment. Hordes of paparazzi aggressively followed her every time she left her house.

She attacked one cameraman's car with an umbrella. She shaved her head at a salon. She lost custody of her children. When she refused to turn over her boys after a visit, she was hospitalized and put on a psychiatric hold. The conservatorship was put in place within days.

Jamie has been a co-conservator of his daughter since that day in 2008. From then until 2019, her father had power over her life choices, and he and attorney Andrew Wallet controlled her money.

Now, he has financial control only and must share that role with the Bessemer Trust, an estate-management firm. Jodi Montgomery, a court-appointed professional, now acts as conservator over her personal matters.

In August 2020, Britney’s legal team advocated to have Montgomery remain as her personal conservator and have the Bessemer Trust Company be named the conservator of her estate. Then in December, the judge extended Montgomery's temporary role until September 2021.

In September 2020, Britney announced that she was ready to open up about her longstanding conservatorship case to the public, according to her attorney Samuel Ingham III.

According to the opposing motion filed, Britney was against the effort by her father to "keep her legal struggle hidden away in the closet as a family secret," the opposition to motion to seal document stated.

But in November 2020, a judge ruled to keep Jamie as co-conservator of Britney’s estate, along with adding the Bessemer Trust Company. Meanwhile, the judge denied Britney’s request to remove her father entirely from the conservatorship.

Thus, both Jamie and the trust company are sharing the management of his daughter's business affairs.

A conservatorship can always be dissolved by the court, though it's rare that a person successfully asks to be released. The burden is on them to prove their competence.

Conservatorships can last decades, because few of the circumstances that lead to them are temporary. The mandatory secrecy of medical records has kept murky the reasons why Britney Spears must remain in hers, but it's clear that it involves psychiatric issues. A recent filing said that she wasn't capable of giving consent for medical treatment.

Even with required secrecy, it's usually no mystery why someone must stay in a conservatorship, says Sarah Wentz, an attorney who specializes in estates. "Courts don’t just impose these on people," she says. They’re most commonly in situations with something dramatic like a traumatic brain injury, Alzheimer's or dementia."

Spears' father and his attorneys have emphasized that she is especially susceptible to people who seek to take advantage of her money and fame. All sides agree, at least in theory, that she should be able to make her own choices if she becomes able. "The threshold is not, ‘Do I make dumb decisions?’ because we’re entitled in our life to make dumb decisions," Wentz says. "Think of how many intelligent women make bad choices. You can fall in love with somebody and give them every penny you have."

Why are so many calling to "Free Britney?"

Fans who dote on Britney Spears' social media posts and public statements, trying to decipher her every utterance, dance move or shared meme, have increasingly coalesced into a movement after becoming convinced she was being controlled unfairly. Key were two women who in 2017 turned their hobby of picking apart Spears’ Instagram posts into a podcast, " Britney's ‘Gram." It would help birth the hashtag #FreeBritney.

Now, even minor hearings can bring dozens of protesters to the courthouse, carrying signs like "CONSERVATORSHIP IS SLAVERY" and "THIS IS TOXIC." Many say they relate to her struggles with mental health and the system. The movement, or at least its sentiments, has attracted her fellow celebrities, including Bette Midler, Miley Cyrus, Paris Hilton and Pitbull.

James Spears has called the group conspiracy theorists, and says those who shout #FreeBritney don’t understand the totality of the situation.