Grapevine High School was put on lockdown Friday because they had received reports of an armed person near campus. After a search of the school, police found the gun.

GRAPEVINE, Texas - Three students and one other person were arrested following an incident at Grapevine High School that forced the campus to go on lockdown.

Grapevine High School was put on lockdown Friday because they had received reports of an armed person near campus. After a search of the school, police found the gun. It took about an hour for the lockdown to be lifted.

The school was locked down shortly after 1:30 p.m. after school officials got reports of a gun at the high school.

Students were pretty shaken up after being on lockdown for about an hour after an image on Snapchat was posted of a person with a gun in his waistband in the school lunchroom. Students say word about the situation spread rapidly among students.

Police say three of four people arrested were students. There were two 17-year-olds and two juveniles. Police say they are still investigating if there was some type of plot at the school.

A police spokeswoman says it is unclear how the non-student was able to get in the school. Students say they must use key cards to enter the building.

Police say because a student reported the Snapchat photo, they knew who they were looking for as they went room-to-room. 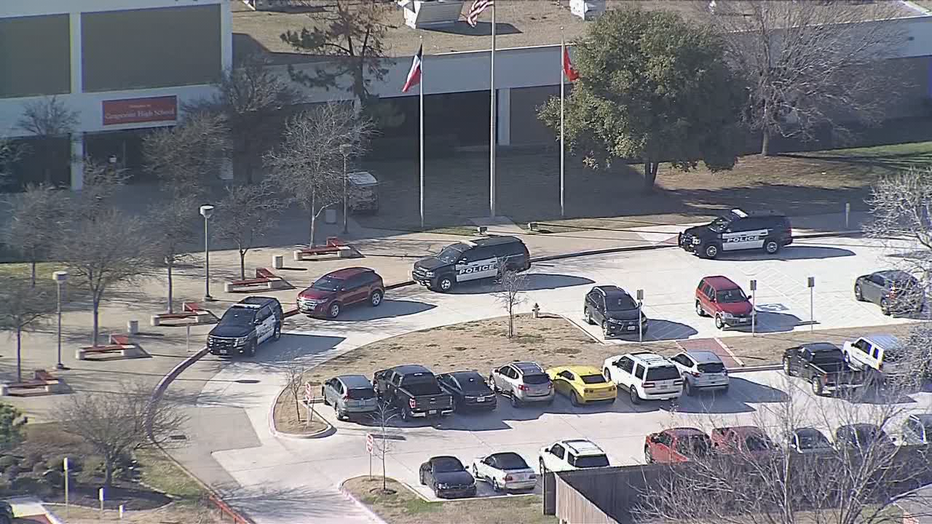 “Within half an hour of doing that, we were able to search through the campus systematically,” said Grapevine PD spokesperson Amanda McNew. “We located the person who was in the photo, the person who took the photo and the gun. We cannot give enough credit to the student who saw the danger and reported it right away.”

“Every time a gun is brought to school, you never know what’s going to happen,” said student Ja’Don Fries.

Police say the gun was a loaded pistol. The student with the gun was taken to jail without resisting.

The four students arrested are facing various felony charges, including making a terroristic threat, criminal trespass, possession of a firearm and possession of marijuana.

No injuries were reported from this incident.

Timberline Elementary School, Cross Timbers Middle School, and the GCISD Swim Center were on lockout procedures for a time, but that has been lifted as well.