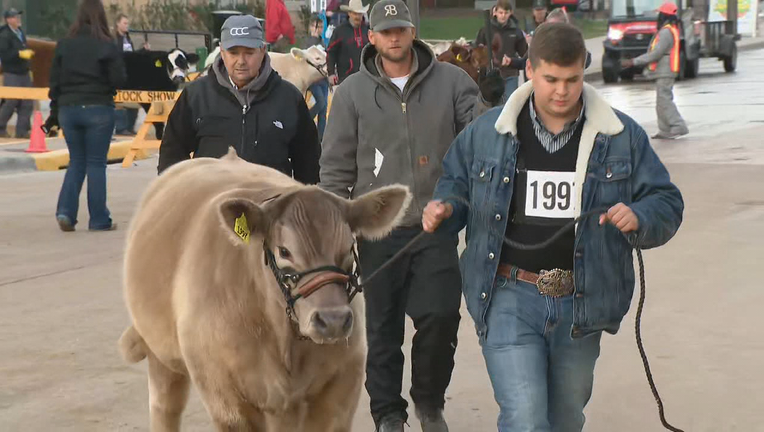 FORT WORTH, Texas - An old tradition returned to the Fort Worth Stock Show and Rodeo for the final weekend.

The junior steer show will happen Friday afternoon at the new Dickie’s Arena, west of Downtown Fort Worth. Then Saturday is the always anticipated sale of the junior champion steers, lambs and goats.

But first, the stock show went back in time with the return of a special event at the historic Will Rogers Coliseum – the steer parade.

Young competitors paraded their animals through the Tower Promenade on their way to the show in the coliseum. The last time cattle paraded to the coliseum was in the late 1960s.

Now that the rodeo is being held at the Dickie’s Arena, the coliseum is providing a much-needed elbow room for the competitors who used to crowd into the smaller Watt Arena.

The Fort Worth Stock Show and Rodeo takes a walk back in time today with the return of a special event at the historic Will Rogers Coliseum. Good Day's Brandon Todd went there to find out more about the line of prize livestock on parade.

Blake Dunkel, a senior at Archer City High School, was at the coliseum Friday preparing to compete with his steer named Hercules. He’s been working with Hercules for the past year – feeding him, petting him and washing him.

“He’s really playful. He’s real gentle and he loves to be scratched and petted and everything,” he said.

The competition is tough with thousands in prize money on the line. Last year’s grand champion steer sold at auction on the final day for $195,000.

Dunkel’s plan is to hold Hercules’ head up high and try to catch the judge’s eye.

“The biggest this is right when you walk in for me is try to catch that judge’s eye, make him look at you. I’m hoping with my cowboy hat and I’ve got a bright shirt on underneath, hopefully I can catch his eye and he’ll look at my steer,” he said.

If he takes home any money it will help pay for his college education.

“If I get lucky and make the sale with this one, that’s where 90% of the money is going to go,” he said.