Fort Worth police are investigating a viral video of an irate driver with a bad case of road rage.

FORT WORTH, Texas - Fort Worth police are investigating a viral video of an irate driver with a bad case of road rage.

The video of a road rage attack in Fort Worth is circulating online showing a shouting match. It’s the very thing police discourage: getting into an argument with another motorist. In this case, the altercation erupted in the middle of a busy intersection.

A traffic tiff on Wednesday turned to terror, and it was caught on video.

Verenice Vasquez is the passenger in the viral video who took a violent punch while she recorded the whole encounter with her phone.

"There was space. There was no reason why we would cut her off,” Vasquez claimed. “Why would we start any problems? We just wanted to go to Home Depot."

Vasquez says it began at Riverside Drive and Berry Street in Fort Worth. She says her dad used his signal to get in front of the woman. Whatever the case may be, it sparked a war of words.

“She just keeps going back at it,” Vasquez said.

“So the window's down and your screaming at each other?” asked FOX 4 Reporter Dionne Anglin.

“Yes. So it’s just vocal altercation,” Vasquez said. “Then we get to the third light, and I just put up my window."

By the time they got to Berry Street and the I-35 W traffic light, another scene popped off. Police say there were several 911 calls from the intersection brawl. But when officers got there, the woman had taken off. 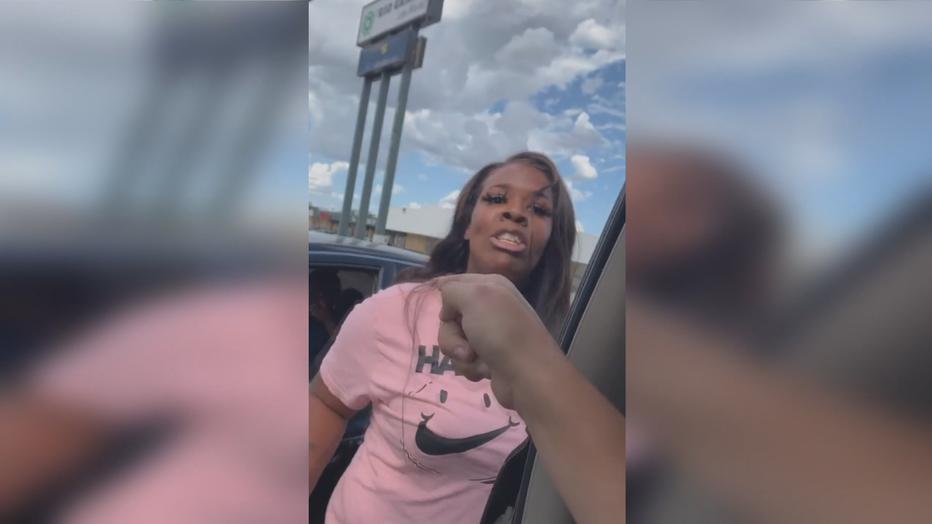 Police say the woman herself called police from another location and reported that the driver struck her car.

"That’s why the officers were trying to make contact with her: to go out and inspect the vehicle for further information for the report,” said Fort Worth Officer Brad Perez. “But upon their arrival, they were advised she'd actually left five minutes prior to the officers arriving."

Vasquez says she regrets getting involved in the shouting match altogether.

"Me and my dad are scared,” she said. “We can't even drive that truck anymore because we're thinking maybe she's going to get us at another stoplight. She may get us and maybe even shoot us, and that's scary."

Police say they are investigating to determine if charges are warranted.