SWAT used armored trucks and tear gas Wednesday to capture a man in a Fort Worth neighborhood who was wanted for two murders.

FORT WORTH, Texas - SWAT used armored trucks and tear gas Wednesday to capture a man in a Fort Worth neighborhood who was wanted for two murders.

Police say over the course of a few hours, the man stabbed and wounded one person and stole their pickup truck.

The man then drove the truck into a building, killing one man, and then hit and killed a woman sitting at a bus stop. He then carjacked someone else.

Two people are dead following the chase in Fort Worth. Their identities have not been released. The suspect’s name hasn’t been released either.

There are still many unanswered questions about the motive with the initial stabbing incident that left one person injured.

SKY 4 was above a Fort Worth neighborhood at the end of an hours-long pursuit of a suspect wanted for a deadly, violent, one-man crime wave. 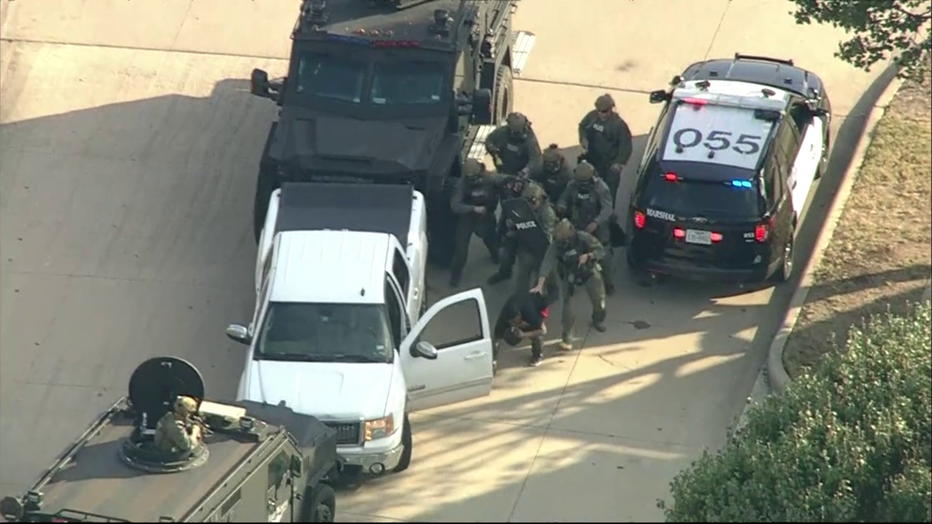 Police say the suspect stole two different pickups, using one of them to kill two people.

The man leaned out his window and talked with police who were telling him to surrender. They used spike strips to flatten some tires, but he was defiant.

This neighborhood standoff went on for about an hour.

"I saw the truck speeding right around the corner, smoke coming out of the tires because he was quite flat," said neighbor Sergio Rodriguez.

Then, police got more forceful.

SWAT teams used two armored trucks to box the double murder suspect in. One pushed the pickup into the other one. They shot tear gas through the truck’s windows.

After a few minutes, he finally came out and surrendered and was taken into custody by the SWAT team members.

The incident started Wednesday morning just before noon when officers responded to a stabbing on Las Vegas Trail. The stabbing victim survived, but police say the attacker stole the victim's grey Dodge pickup truck and took off.

The man then used the stolen truck to smash into a gaming room on Camp Bowie Boulevard West.

Macafee says the suspect frequented the place and knows the man who was killed. He described the murder victim.

"He was a really good dude," he said. "There is nothing to say bad about the man."

"At about 1:45 p.m., officers located the suspect in that stabbing on the 8700 block of Camp Bowie West," explained Fort Worth Police Chief Neil Noakes. "They were flagged down by citizens who said the suspect had run over at least one pedestrian in that location."

Police say when the suspect drove away from the gaming room, he hit a woman at a bus stop also on Camp Bowie. She also died.

Chief Noakes says that’s when he abandoned the grey Dodge pickup and carjacked someone, stealing their white GMC pickup and leading police on a chase.

"The only suspect involved in any of this, the only person that was a threat is in custody," he said.

People in the neighborhood where the chase ended say they hardly ever see or hear about crime happening in their community.

"Out of the whole two years I’ve been in this neighborhood, this is the first incident. Hopefully the last," Eric Zuniga said.

Police have not identified the suspect is or what charges he is facing.