Organizers blamed the COVID-19 omicron surge for the cancelation of the outdoor event.

FORT WORTH, Texas - The Martin Luther King Jr. Day Parade scheduled for next week in Fort Worth has been canceled.

Organizers blamed the COVID-19 omicron surge for the cancelation of the outdoor event.

Other major events, including the Fort Worth Stock Show and Rodeo and its parade, are still happening.

Organizers had been anticipating the MLK parade after last year’s could not go on. They posted their excitement about it on social media just a few days ago.

But organizers say after seeing the numbers continue to quickly rise, the late cancelation was the safest option. 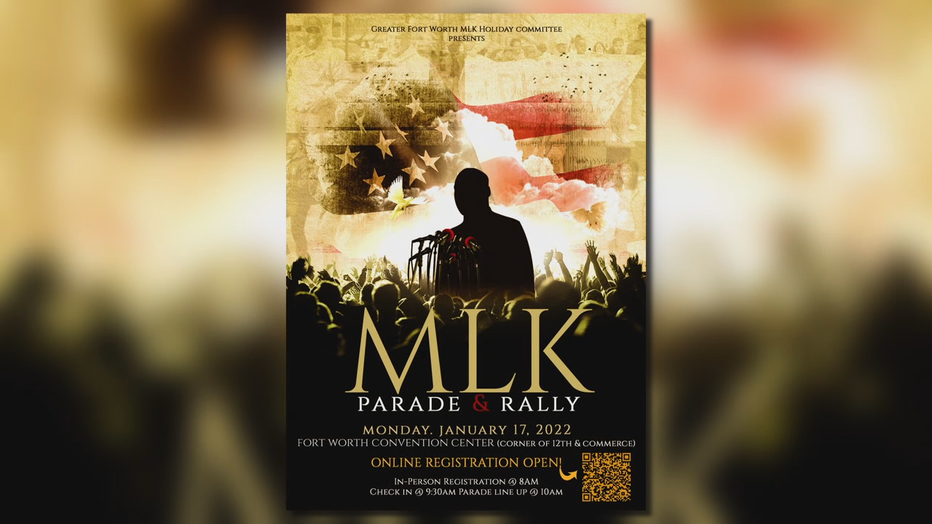 Chairperson Krista Daniels says the board could not ignore the rising COVID case count in Tarrant County, with nearly 10,000 new cases on Thursday alone.

"We were looking at it daily," she said. "But then we looked at the fact of who would be attending the parade."

Although the parade is outdoors and the risk of spreading the disease outside is low, Daniels is worried about the vaccination levels among the parade’s audience.

"I had to take a step back. I had to engage my board," she said.

A separate spoken word MLK celebration planned for Fort Worth city employees on Thursday quickly turned into a virtual event.

The city of Dallas already had plans for a virtual parade.

Arlington has postponed its four-day celebration but has not yet announced a new date.

Meanwhile, the Fort Worth Stock Show and Rodeo inside Dickies Arena is still set to return on Friday after last year’s cancelation.

"This time around was a little different. The vaccines are a game-changer," he said. "We felt it was going to be a good decision, a prudent decision to hold a stock show."

Brockman says they will include something called "bipolar ionization," which was installed in HVAC systems. The new technology claims to help remove viruses, although the federal government warns there’s not enough data to prove it works.

There’s also free testing and a vaccination clinic on site during the entire three-week event.

But for the most part, people can make their own decisions when they attend.

Daniels says instead of the parade, she and her fellow board members will visit testing sites set up at The Potter’s House in Fort Worth and Mt. Rose Baptist Church to help others avoid the battle with COVID she went through last summer.

"I knew how I felt. All alone," she said. "And there is no way that I would be able to sit and allow someone to go through with what I went through."

The annual stock show parade is planned for Saturday morning.