Farrington Field has hosted football games, soccer games and many other events for 80 years. It’s now one of 18 facilities owned by the district marked to potentially be sold.

FORT WORTH, Texas - Fort Worth ISD may sell one of the city's landmarks.

Farrington Field has hosted football games, soccer games and many other events for 80 years. It’s now one of 18 facilities owned by the district marked to potentially be sold.

The district says it needs extensive renovations and does not attract enough people to keep it open.

Farrington Field holds nearly 20,000 people. It's been home to high school football for decades, but the school district says this comes down to a business decision that could lead to two new fields and a whole lot more. 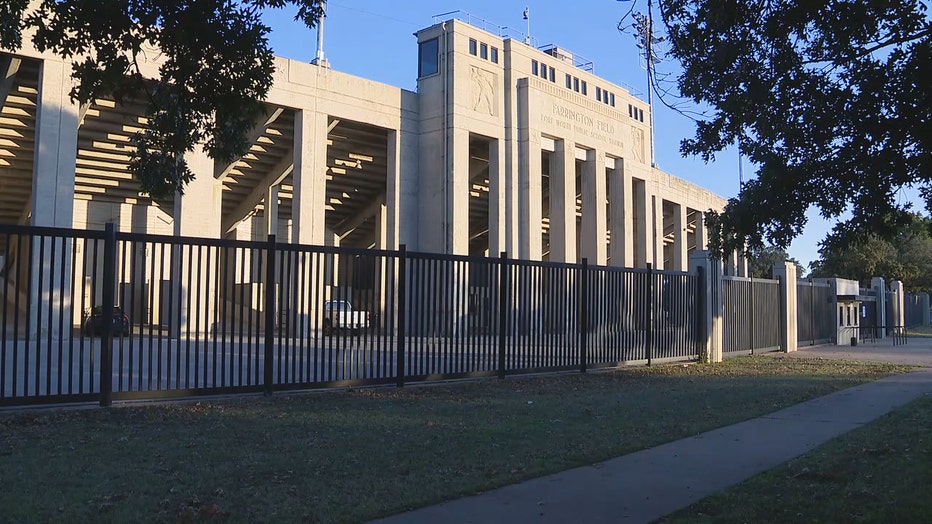 It's been the home of high school football memories for the better part of a century, but it might be game over at Fort Worth's Farrington Field.

Juan Menjivar plays JV football at North Side High School in Fort Worth. He'll be watching from the stands as the varsity team takes on Wichita Falls Friday. He grew up watching his older brother play at Farrington Field, but Fort Worth ISD may sell it.

“I would want to play there. But if it gets destroyed and it gets removed well, that would be a little emotional,” he said.

The district calls it a business decision.

“We believe that we could add another $60 million to the tax roles,” said Clint Bond with Fort Worth ISD.

The district identified Farrington Field as one of its 18 underused properties. It’s also looking to sell its administration office off University Drive and replacing it with a smaller version that includes a learning center.

Farrington sits in a part of the city that is experiencing rapid growth.

“I don’t know if it’s really conducive to the area and vice versa,” said J.D. Ybanez, a nearby business owner.

But it’s also a piece of history. It’s been a fixture since 1939. Even if the district sells the stadium, the sale would be tied to preserving the west side facade.

The hope for Menjivar is that he gets to play at Farrington Field at least once just like his brother.

The school district stresses that nothing is said and done. They're exploring the issue, and nothing would happen for at least 18 months. The school board would have to approve it.

Chairman Jacinto Ramos could not be reached for comment.